Blog Tour & Giveaway ~ What's Past Is Prologue by Anna Galvia 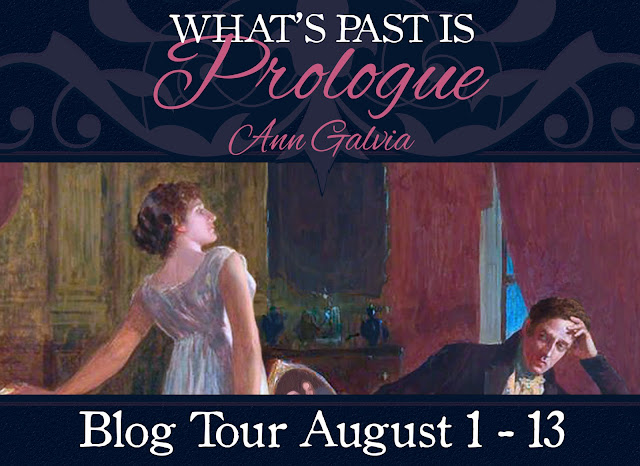 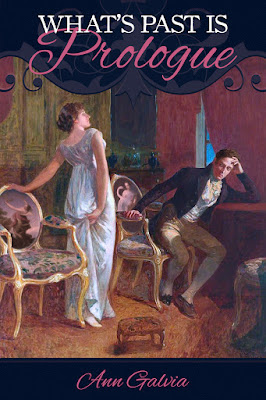 Elizabeth Darcy has her eye on the future.

Before her marriage, she saw herself making the best possible choice. Her husband saved her family from ruin. All he asked in return was her hand. Secure in his good opinion, Elizabeth married him. Only with hindsight and his cryptic warnings that passion is not immutable does Elizabeth question her decision. Her solution? Give him a son as soon as possible. Once his lust for her has been slaked, this service she has rendered him will ensure her value.

The newlyweds are summoned to Rosings Park almost the moment they are married. Though the estate can boast of beautiful grounds, Elizabeth and Darcy arrive to find devastation. A flood has swept away Lady Catherine’s last hopes of hiding debt and years of mismanagement. She expects Darcy to shoulder the recovery efforts.

The effort to save Rosings strains the already tense relationship between Elizabeth and her husband. To make matters worse, her presence is met with disdain and disinterest from the family. As the days in the besieged estate drag on, Elizabeth slowly untangles the histories and secrets of her new relations.

Like Elizabeth’s marriage, the crisis at Rosings is the culmination of past events. Disaster need not be the result of only bad choices; good principles have led them astray as well. As for Elizabeth, she barely knows her husband, and loving him might be impossible. Yet, she is determined to save all that she can—her marriage and the estate—and somehow, create the future she longs for. 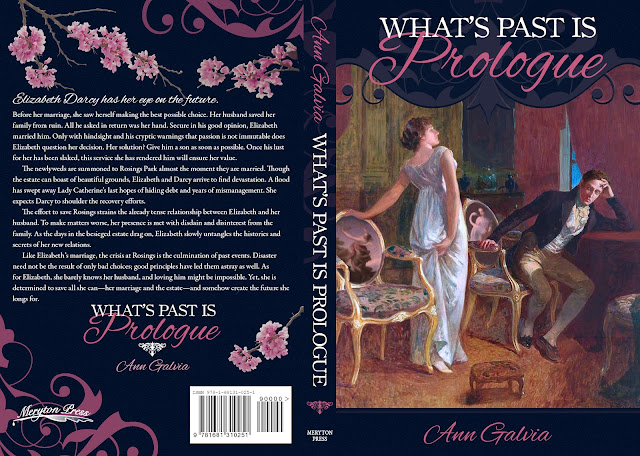 Hi and welcome Ann to my little corner of the web and taking part in this little interview with me.


Inquiring minds are dying to know, which book inspired you to begin writing?

How did you discover Jane Austen?


When I was in college, I met a girl who read “Pride and Prejudice” her senior year of high school. She embarked on a campaign to relentlessly badger me into reading it. At the time, I was studying cultural anthropology and dismissed her on the basis of ~I’m not interested in romance novels. I only like social commentary.~ (Obviously, I did not know the first thing about Jane Austen, and she who did was, shall we say, undeterred. And also, the devaluation of female-oriented genres is a whole other issue to unpack that we won’t get to today.) This went on for….a while. Had you asked me at the time, I would have told you she had been bugging me since she was 12, despite the fact that we did not know each other then and she hadn’t read it until high school. I would not have even been kidding. It honestly felt like it had been going on forever.

And then came the Lizzie Bennet Diaries. If you are not familiar with LBD, it is a YouTube show that ran in 2012-13. Consisting of 100 regular episodes of roughly 5 minutes a piece, 10 Q&A episodes and 3 epilogue episodes that came out a year later, it’s a modern adaptation of P&P that casts Lizzie Bennet as a graduate student studying mass communications. As part of her thesis project, she creates a video diary that she mostly uses to rag on her family, wax poetic about Jane and Bing Lee and rant about this Darcy dude that she hates. My friend now had a new way to bombard me with “Pride and Prejudice” and started linking me to episodes. After the third or fourth time she sent me episode 60--the first proposal, known as Darcy Day to LBD fans since it’s the first time Darcy appears on screen--I finally relented and watched the whole series.

Needless to say, I was a fan. I immediately ran out to get the original book and have never looked back.

And my friend was just like, Yes, I knew you would like it. That is why I kept telling you to read it!

What led you to creating the storyline for “What's Past is Prologue”?

Not long after my first read through of P&P,  I was teaching a nonfiction reading unit to my fifth graders. (As an anthropologist, I wanted to teach people about the world. Figured the best way to do that was be a teacher.) It was during the primary documents portion of the unit that I first learned of the Year Without a Summer. My mind immediately jumped to Year Without a Summer P&P fanfic. Specifically, a married Darcy and Elizabeth journey to Rosings Park to help Lady Catherine sort out the impact the weather is having on her estate. As the years passed, the storyline got incrementally tweaked over and over again. Eventually, the Year Without a Summer wasn’t even part of it anymore!

This story’s setting is Rosings Park, home of Catherine de Bourgh. What led you to make this decision and what challenges did you face writing this story in this setting?

The center of the concept was always the relationship between Elizabeth Darcy and Lady Catherine. There was never a moment where it didn’t take place at Rosings Park. Two major challenges shaped the direction of the story:

It began as a Year Without a Summer story. That meant Darcy and Elizabeth had been married for a few years. For Lady Catherine and the Darcys to still be in conflict was silly. Jane Austen didn’t let us know how long Lady Catherine and Darcy stayed mad at each other, but we do know Elizabeth cajoled him into letting go of his resentment and the family came back together. I felt like the degree of conflict between Lady Catherine and the Darcys did not suit the amount of time that had passed. So, the timeline got moved earlier. No longer was it a Year Without a Summer story. The Darcys were newlyweds.

The second challenge was just how hard it was to work Darcy himself into the plot. In my earliest drafts, Darcy and Elizabeth were happily married and they had nothing to talk about. Their relationship did not drive the story. In fact, it was essentially absent. I spent a lot of mental energy trying to find ways to shoehorn Darcy in to Elizabeth’s day to day life without much success.

And then I put them in conflict with each other. And that’s when the story blossomed. Suddenly, they had a dynamic. There were stakes. In addition to the strife, they have all these moments of playfulness, of honestly, of passion, of serious conversations about the situation at Rosings Park that easily could have been in the original HEA scenario but simply weren’t.

With this change, Darcy became the engine for Elizabeth’s journey. She begins the story without a clear view of what a successful  marriage ought to be. She’s the product of an unhappy union. Her lack of dowry and the price of rescuing Lydia have made her a financial burden on her husband. How long is that burden going to seem worthwhile to him? Once the story stopped being about Lady Catherine and started being about Elizabeth dealing with the baggage she didn’t know she had, and growing up and growing towards Darcy as her partner, the story opened up.

What's the strangest thing you've ever had to research online for your book?


I feel like most of the things I research are pretty mundane, though sometimes the results are unexpected. For “What’s Past is Prologue,” I read agricultural surveys of Hertfordshire, Kent and Derbyshire. I wanted to know what was grown in these counties, when it was planted, when it was harvested and what was done with the harvest.

The people of Hertfordshire were very opinionated about the best way to grow wheat. The man carrying out the survey seemed initially caught off guard by how passionate the people were about the Right Way to Grow Wheat, but he played into it and began asking every farm he interviewed about their Wheat Opinions. It’s sort of a funny undercurrent throughout the entire thing. Derbyshire, on the other hand, had a reputation for being terrible for growing wheat. Some people believed wheat couldn’t grow in Derbyshire at all! It could, it just wasn’t their big money maker. But when you look at their methods, they were also doing the exact opposite of what the Opinionated Hertfordshire Wheat Farmers would tell you to do, so...

What do your plans for future projects include?

I think the best thing you can do is to just do it and keep on doing it. Writing is a skill that you have to build through practice.

Tea or coffee?
Coffee for everyday, tea when I have the time to sit down and enjoy it.

Cats or Dogs?
Cats. Entirely too many cats.

Movies or TV?
I have not seen a single film in 2018 thus far, so I guess TV is winning by default.

What ​came first, ​the chicken or​ the​ ​egg?
The chicken, alphabetically, ordinally, and sexually.

Thank you Ann for being here today. I loved getting to know more about you and What's Past Is Prologue and I look forward to seeing what you'll bring us next.

Ann started writing sometime before she knew how letters functioned. Her first books were drawings of circus poodles heavily annotated with scribbles meant to tell a story. Upon learning how letters were combined to represent words, she started doing that instead. This has proven to be much more successful.

And sometime after that, she realized all she really wanted to do was write, which probably should have been evident from the beginning.

Readers may enter the drawing by tweeting once a day and daily commenting on a blog post or a review that has a giveaway attached for the tour. Entrants must provide the name of the blog where they commented. If an entrant does not do so, that entry will be disqualified.