Guarding His Heart by JS Cooper 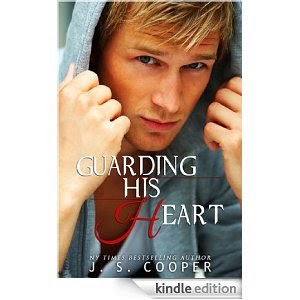 Oh Leo! I have always had a thing since I first met him in the Last Boyfriend. So, when I heard this book was going to focus on him, I was thrilled.

We already know how Leo feels about falling in love, getting married and having a family... not going to happen. Between Zane and Noah, Leo has no desire to be "whipped". Thanks but no thanks is his motto; famous last words!

Leo's father has had enough of Leo being a bodyguard/bouncer and has made him come and enter Corporate America as an executive manager in his company. Although Leo would much rather sit back and relax or surf, he knows it is time to man up and start to learn the company that he will one day be CEO of.

Bright and early Monday morning, Leo is taking his first steps toward his future when a sassy and very beautiful lady shares the elevator with him. She, Hannah, asks if he is new and he says yes; this is all fine and good, except she doesn't stop there. She precedes to tell Leo that she cannot stand her new boss which just happens to be the CEO's son! She feels that he is an entitled spoiled rich kid ridding daddy's coat tails. Leo, of course, finds all this amusing. Imagine her surprise when he gets off on the same floor as her and he tells her his name is Leo. After a couple of seconds, she puts two and two together and she is mortified. That was defiantly quite the first impression.

The banter between these two is thrilling. Leo and Hannah find each other sexy but due to the working situation, neither is willing to make the first real more. Leo just can't help himself; he is always making suggestive comments just to get a rise out of her. However, while on a business trip to New York, Hannah makes a move that will change their relationship.

From the start, Hannah knows how Leo feels about relationships but she cannot help falling for him after spending so much time with him in New York. Leo, on the other hand, is having to come to grips with his feelings. The way he feels about her, well he has never felt that way about anyone. And just as these two begin to realize what they have could be  deeper then expect, there is a bump in the road and that bump just happens to be Leo's father.

These two are both strong-willed and independent, so when things threatens to end a good thing before it even gets started, they have to decide if what they feel is worth fighting for. Luckily for them, and us, Lucky steps in to help clear the air. With everything is out in the open, can Leo finally open his heart to love or will he always be guarding his heart?

I love, love, love this book. The flirty banter, emails and texts are priceless. We not only get to know what Leo is thinking but also get to know what Hannah is thinking. Their dynamic is wonderfully written that you cannot help but fall in love with these two. Leo may have been the handsome surfer dude, but there is so much more to him than meets the eye. I love his complexity. Hannah is smart and witty and doesn't take anyone's crap. She fits perfectly with all the other cast of characters... Zane, Lucky, the twins, Noah, Robin and Skyler. Thanks JS Cooper for another will written story that fits into the Forever Love Series perfectly.