Everyone has a dark side...

Kidnapping, abduction, and sexual slavery are just a few of the titillating taboo themes in this hand-picked anthology. 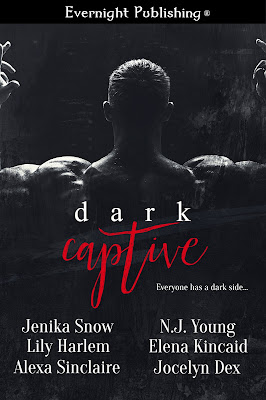 Take Me
by Jenika Snow

After her mother passes away, Holly decides to finally have a life away from her abusive father and the darkened, lifeless world she lives in. But someone has been watching her, waiting for the right moment to take her away. It’s when she comes face-to-face with her captor that she realizes he won’t let her go.


Will Holly stay with a man that decrees she’s his, that he’ll do whatever it takes to make her see they belong together? Despite the twisted and dark nature of it all, she feels freedom for the first time in her life. Will she give in, or will she accept what he offers her … her life back?

“You had no right to take me away.”

“You were running,” he said without apology. “I didn’t take you away from anything.” He stood and walked over to the kitchen, opened the freezer, and grabbed a bottle of alcohol out. He took two glasses next and came back to the table. Nothing was said as he poured clear liquid into those glasses. He pushed one to her, took the other for himself, and while looking at her, tossed it back, drinking it in one swallow.

She looked down at the alcohol, and without thinking, because this was so fucked up, she grabbed the glass and drank it, as well. It burned going down, and made her already teary eyes water even more, but she welcomed the flash of heat it caused in her veins.


“I may have been running, but you had no right to take me, to think you knew what I wanted.” She was the one to hold her ground now. “You took me to satisfy things on your end.”

Where is this strength coming from? He’s dangerous. Just look at him, and you can see it.

She saw the way his jaw clenched, the tightness of his body, and knew she might have crossed the line with her words. Holly knew nothing about him, or what he was capable of.

He’s capable of stalking me, of taking me away. He’s capable of hurting people and clearly having no remorse. I have no doubts he would have no trouble killing someone that crossed his path.

“Watch it, Holly.” His voice had gone cold, steely.

She swallowed, a shiver working its way throughout her whole body. She wanted to say “or what,” but kept her mouth shut, being smart.

“Or I might throw you over my knee and spank that pretty ass until it’s purple and your pussy is wet.”

She felt her mouth go slack at his words. But the most surprising, if not traitorous thing her body did, was react to his words by heating, her pussy becoming wet, and her nipples hardening.

“You’re insane,” she said and stood. She glanced around the room, but didn’t know if she was running from him or what she felt. She turned and saw the front door, ran toward it, but realized it had some state of the art lock on it that was activated by fingerprints. He had his hands on her waist only seconds later, the hold unforgiving. There was a little bit of pain associated with his touch, but she found it arousing.

She hated that fact, loathed herself for getting turned on by this man when she should be screaming.

“You can scream, but no one can hear you, Holly.” He let those words sink in before continuing. She heard him inhale right by her hair, and she found herself closing her eyes.

She was still breathing hard, but the need to pass out had subsided. He turned her around but kept his body pressed right up against hers. The feel of his erection against her belly was clear, and her fear heightened that he may rape her.

Purchase from
Evernight Publishing | Amazon | ARe 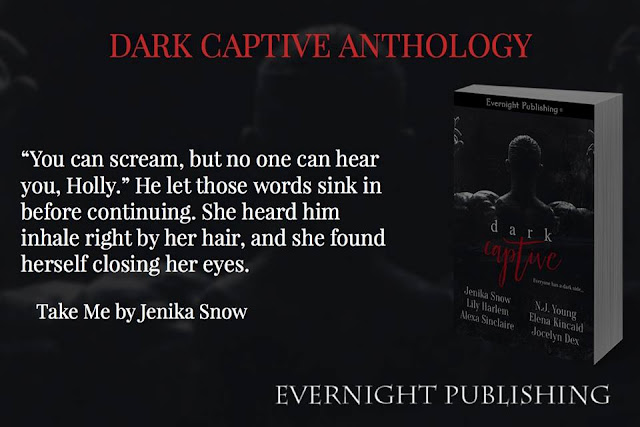 Visit all of the tour stops to find out more about each story in this amazing anthology!