Blog Tour & Giveaway ~ Side by Side, Apart by Ann Galvia 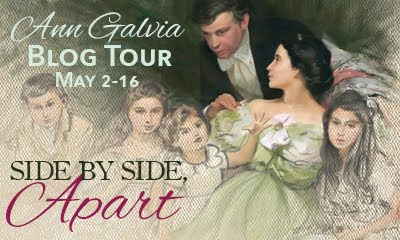 Side by Side, Apart
By Ann Galvia 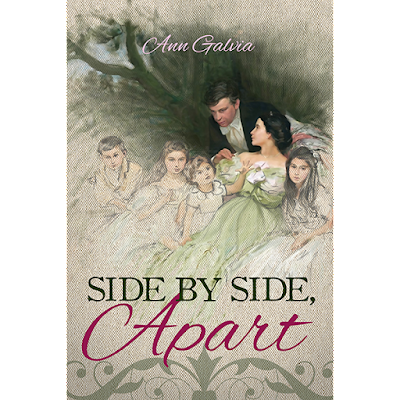 “You see what a strange circumstance it is,” she said, feeling some fleeting relief. “You know our acquaintance has not been easy.”

Elizabeth Bennet—stubborn, quick to judge but slow to revise her opinions, and entirely prejudiced against the man who had just proposed marriage at Hunsford—awakens to learn she has been in an accident. Bedridden in an unfamiliar house, she learns eleven years have passed since the last moment she can remember.

She finds herself a married woman, the mother of four, and pregnant yet again. Her children are strangers, and most mystifying of all, Fitzwilliam Darcy is her husband! How could she have married a man she loathes?

Confined to the house by her injury, Mr. Darcy’s company is inescapable. But is just being side by side enough to overcome their differences? What happens when Darcy, improved in manners and happily married to Mrs. Elizabeth Darcy, is faced with an obstinate, bewildered Miss Elizabeth Bennet?


From: Chapter Two
Darcy introduces Elizabeth to the older children

Immediately upon securing Elizabeth’s agreement, Darcy turned to the

maid. “Have Miss Weston bring the girls.” The maid curtsied and disappeared to deliver the message.

Elizabeth ran her hands over the protrusion of her belly. Eleven years they had been married. She could not imagine such a thing. How many children could she have been delivered of in eleven years? Multiple girls, clearly. It was to be hoped that she had not inherited her mother’s unfortunate inability to bear sons.

Unable to endure waiting in silence, Elizabeth asked, “How many children have we?”

“You have birthed three…” He was clearly of a mind to say more when Miss Darcy was announced.

Slight and frail with red-rimmed eyes, Miss Darcy wasted no time at all in climbing upon Elizabeth’s bed and nestling against her mother’s side. Elizabeth’s arms wound around the child of their own accord.

The girl’s voice was thick and shaking as she repeated, “Mama, Mama,” over and over again. Fearing Miss Darcy might begin to sob but unable to offer any true condolence, Elizabeth held her and cooed.

Quite unmoved by his daughter’s display, Darcy asked, “Where is Julia?”

He had said ‘girls,’ Elizabeth remembered. Two daughters and a son, then, with another babe on the way.

Miss Darcy raised her head from her mother’s shoulder, took a deep breath, and said with a carefully moderated tone, “She did not wish to come in.” Elizabeth surmised Darcy’s children to be well versed with his ill temper. Her arms tightened around the girl she held. She deserved a better mother—one who would not forget her, one who would not subject her to her father’s moods and general dislike of humanity. She certainly deserved a better father.

Mr. Darcy frowned. “What nonsense is that?”

“She said Fitzwilliam and Thomas should see Mama first.”

“Did she object to your visiting your mother?”

“I do not know. She walked with us from the schoolroom.”

Muttering something under his breath, Darcy rose and stalked out of the room.

Elizabeth’s lips curled involuntarily into a smile. Mr. Darcy should have known that marrying her would reward him with troublesome daughters. Neither Mr. nor Miss Darcy had treated their exchange as though it were unusual. Elizabeth suspected Miss Julia gave her parents grief quite regularly.

Darcy returned with a fair-haired girl in his arms. Any resemblance between the two girls was fleeting. Miss Darcy had a dark complexion while Miss Julia was blonde and pale. Miss Darcy was almost unnaturally thin; Miss Julia was stout.

Darcy set her down and, in a tone that brooked no argument, said, “Apologise to your aunt.”

Ann started writing sometime before she knew how letters functioned. Her first books were drawings of circus poodles heavily annotated with scribbles meant to tell a story. Upon learning how letters were combined to represent words, she started doing that instead. This has proven to be much more successful.

And sometime after that, she realized all she really wanted to do was write, which probably should have been evident from the beginning.

5/8: Guest Post & Giveaway at My Kids Led Me Back to Pride and Prejudice

5/9: Review at Diary of an Eccentric

5/15: Review at Babblings of a Bookworm