Over a decade ago, fourth grade teacher Tate Donnelly was attending college with the love of her life by her side. She had been certain, even then, that it was the forever kind of love. But she was proven wrong when he left her all alone to pick up the pieces of her life—and heart—when her entire world imploded.

Former Navy SEAL Miller Vaughn once had the love of a girl he thought would be his, and be by his side forever. Unfortunately, that only lasted until after he joined the Navy. Then she vanished, never to be heard from again. Throwing himself into his training, he vowed to become the best, toughest SEAL he could be, and never let a girl get the best of him again.

Years later, a man who resembles a boy she once knew reappears in her life. A boy she had loved with her whole being. A boy who had eviscerated her heart.

Though much time has passed, Tate and Miller still feel that same "pull" they did years ago. When truths about the past are revealed, will they both be able to move on from their painful past … or are they destined for heartbreak again?

Can they remember when their love was the most important thing in their world? 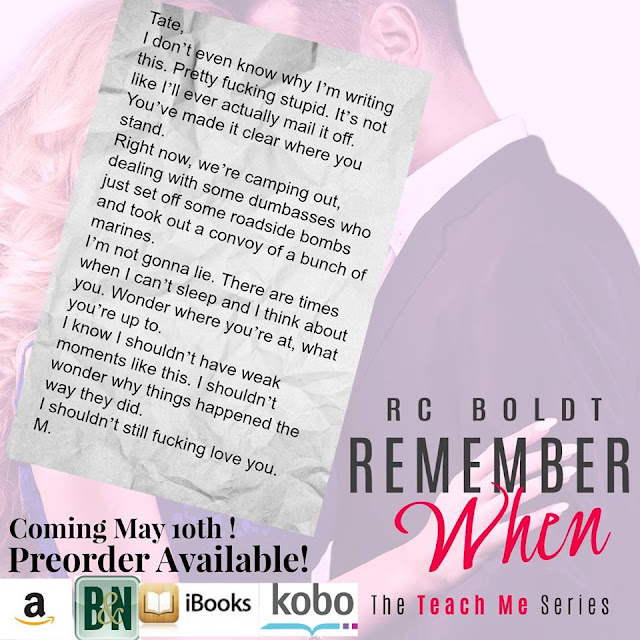 RC Boldt is the wife of Mr. Boldt, a retired Navy Chief, mother of Little Miss Boldt, and former teacher of many students. She currently lives on the coast of North Carolina but dreams of relocating to a tropical island. When she's not writing, she can be found daydreaming of relocating to a tropical island, at the beach, going running with her family (and contemplating *gently* tossing her daughter out of the jogging stroller to reduce weight resistance), singing karaoke, harassing her husband or relaxing with a good book. And, let's be honest. Most of those activities listed probably include wine or a good microbrew. Except for the running. In that case, the drinks come afterward. :) 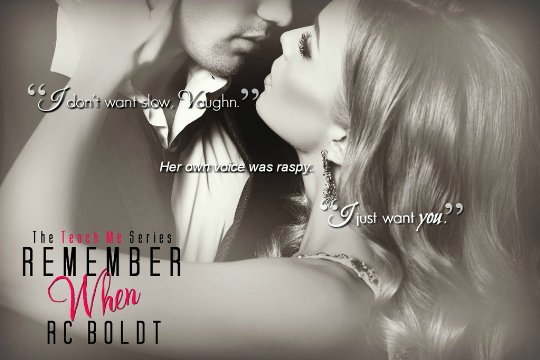 Let's Learn A Little Something About RC Boldt

Top 5 things you probably don't know about me:

1. I'm left-handed in all things except for handwriting.

2. I can't see the big 'E' without my contacts or glasses.

3. I've broken more bones that I can keep track of.

4. I have two graduate degrees--one in education and the other in forensics.

5. Bandaids, antiseptic, dental floss, hand sanitizer, lotion and, in some cases, travel deodorant can be found in my 4x6 inch purse. All crammed in there. And I've been this way for years, B.C. (before child). 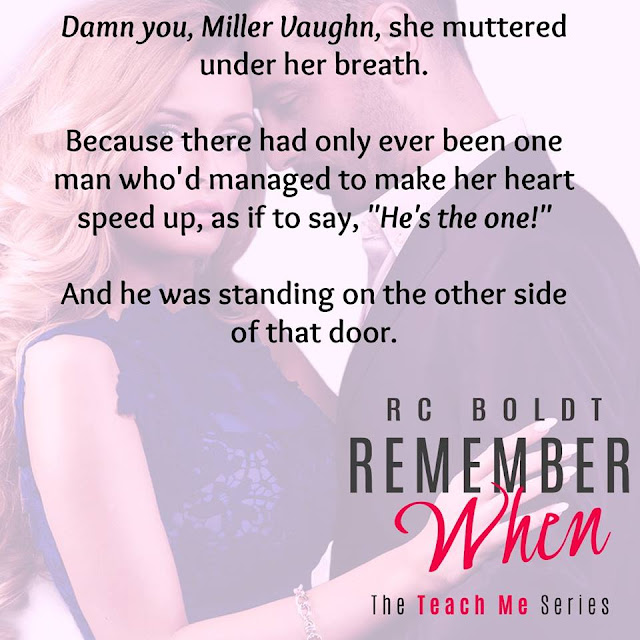 There was no mistaking the glaring ‘Return to Sender' stamps on the letters I held in my hand. Staring down at the letters I'd just retrieved from my mailbox in the commons area on campus, I couldn't ignore the sick feeling in the pit of my stomach.

Miller and I had begun dating during our senior year of high school and it had been nothing short of spectacular. When the popular quarterback of our school's undefeated football team had slid into the vacant seat beside me in AP Biology, asking if I'd be his partner, I had been surprised, as the two of us normally gravitated in completely different circles. No, he wasn't a dumb jock; I had noticed him in some of my other AP classes, but still. I had been the Editor-in-Chief of the yearbook staff. Not exactly scintillating by high school standards.

We had grown closer, become friends, as we dissected animals and I'd discovered that we worked well as lab partners. Far better than I'd ever expected. We began studying for our tests and, little by little, I warmed up to him. When he'd asked me to go to the Homecoming Dance with him, I had been decidedly cautious.

"I don't know …" I had hesitated. "Don't you think you'd be better off taking Kalli? Or Stephanie?" I offered up names of the two extremely popular cheerleaders at our school. These were girls who showed absolutely no hesitation in fawning all over the tall, handsome Miller Vaughn with his sparkling blue eyes and dark hair. He was extremely muscular, even for a high school senior, and with his six foot three frame, he appeared intimidating to many.

Miller had given me a patient smile. "Tate, if I wanted to ask someone else to Homecoming, I would have. But I didn't. I asked you."
Looking up into his eyes, I had thrown caution to the wind. "Okay. But if it turns out to be like a scene from the movie Carrie, I'm going to be really pissed."

His head was thrown back in laughter before gazing down at me with a tender smile. "Tate, I promise I won't let anything happen to you."
And he hadn't. We had gone to the dance and he'd been a perfect gentleman, opening doors for me, holding my hand, his shoulders thrown back with pride as he walked into the gym with me on his arm. I'd had more fun than I had ever expected. And when it came time for him to bring me home, his soft lips pressed against mine in the sweetest kiss.

From that point on, we'd been inseparable. And by the time graduation came around, he had told me he loved me and wanted to be with me, for us to go to the same college. When we had both been accepted to UMU, it had seemed like it was meant to be—like we were meant to be.
Until the end of our freshman year. 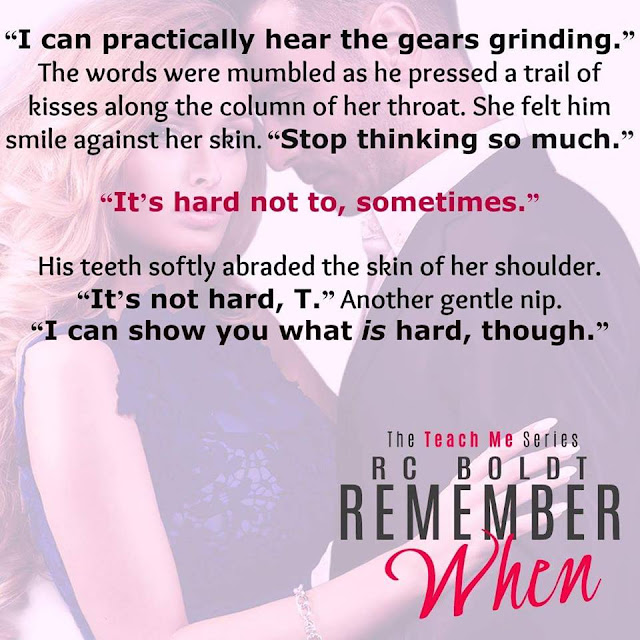 Tate Donnelly is being to feel like the odd ball out. Her friends are finding love and she couldn't be happy for them, but she wishes she could find her other half. The only problem is that she gave her heart away years ago and he still holds her heart, even after the heartbreak she's been through.

Miller Vaughn never expected to see the one person that broke his heart when he walked into Mamma K's house. Her beauty still takes his breath away, but moving past the hurt is harder than expected even after all these years. If being around her is the price to pay to do his job, a job he loves, and surrounded by his friends, then so be it.

In order to keep their friends from being uncomfortable, they call a truce. But the more time they spend together, the harder it gets to fight the undeniable feelings they still have. So can they move past the hurt and reach for the future? Or will their past continue to haunt them, not letting them see what could be?

This book is about second chances, forgiveness, new hope, and unforgettable love. It's full of love, laughter and amazing friends that will be there for you in the good times and bad.

I enjoyed getting to know the background between Miller and Tate. You see them fall in love at a young age, feel their hurt at the breakup of their relationship, coming together again and learning to love again.

Miller is tall, dark, handsome, a typical alpha male, and a gentleman with a kind heart. Tate the girl everyone loves, but there are things she keeps to herself. She a tough nut to crack, but when you do, you'll see the beautiful person she is inside and out.

RC Boldt's Teach Me series keeps getting better and better and Remember When is an exceptional triumphant success. Her story captures you from the start and holds you until the very end leaving you with a smile on your face and hankering more.

Sometimes the biggest risk will lead you to your greatest joy. 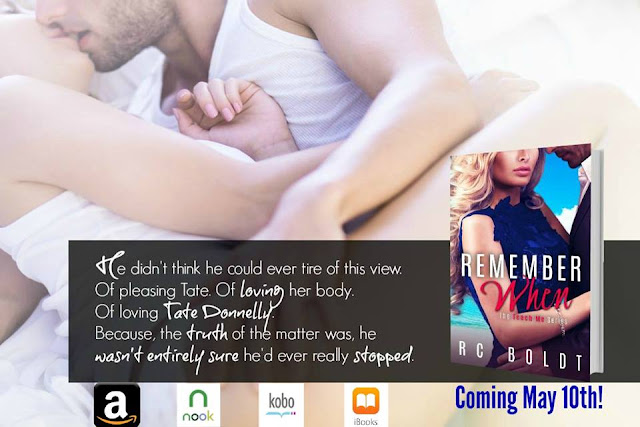 Also Available In The Series 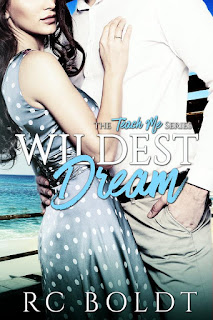 The Teach Me series starts off with the story of Raine and Mac, the most unlikely of best friends…

Taken from his parents and bounced from one foster home to the next, former Navy SEAL turned math teacher, Callum “Mac” Mackenzie had a rough childhood. The only time he’s let himself get attached to anyone has been with his military “brothers”. He’s convinced he doesn’t know how to love and certainly doesn’t “do” relationships. He’s spent fourteen years in the Navy and now he gets to live out his other dream: teaching.

Her thirtieth birthday fast approaching, science teacher, Raine Thompson feels as if her time to find “the one” is running out. She knows life is short, especially after dealing with breast cancer two years ago, and wants to experience her own happily ever after. But is it in the cards for her?

Finally acting on the simmering attraction they have long ignored, Raine and Mac decide to have a fling and they discover what it’s like to have someone who knows you inside out also be the one who makes your body come alive.

But it was only temporary…

Hard To Handle
Teach Me Series #2 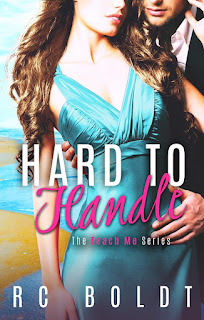 Fifth grade social studies teacher, Laney Kavanaugh, is no stranger to being left behind – her father taught her that at a young age. That’s why she always has her eyes wide open when it comes to men. She’s determined she will never again be the one left behind. She doesn’t let sex blur what they’re really doing; it’s always just sex.

Zachariah Mayson, fifth grade writing and English teacher, has been the bane of Laney’s existence from the moment they met at their shared elementary school. She can’t stand him. He gets under her skin like no other and is always utterly obnoxious in his attempts–and successes–in getting a rise out of her.

The night of their friends’ wedding, Laney gives in to a moment of melancholy, knowing she’ll never be able to let her guard down enough to let a guy close, let alone someday get married. She and Zach end up having the hottest night she’d ever experienced, showing her another side of him, a softer, sweeter one he’d hidden from her until now. Because now, he hoped she was finally ready to “see” him.

But when you’ve always guarded yourself against falling in love, can you let go of the past in order to embrace the future? 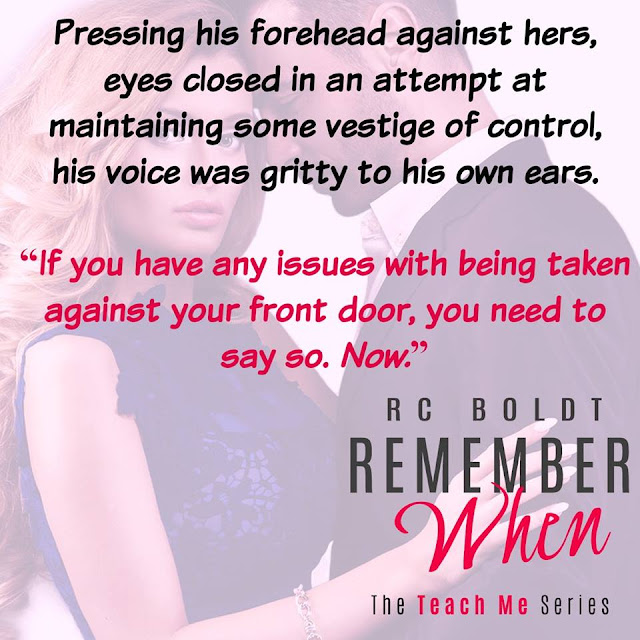 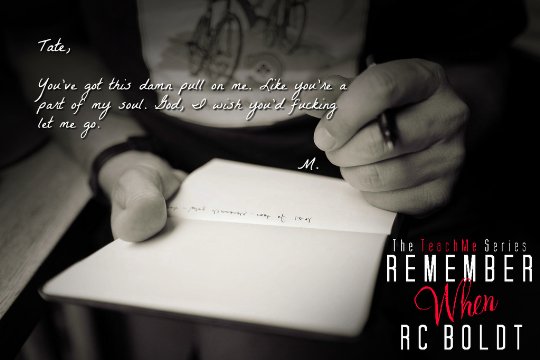