New Release & Giveaway ~ Testing The Boss, Billionaires in the City #5, by Mallory Crowe

Welcome to the Release Tour of Testing The Boss by Mallory Crowe.
This is the fifth book in the Billionaires in the City series!
Now lets learn a bit more about Mallory. 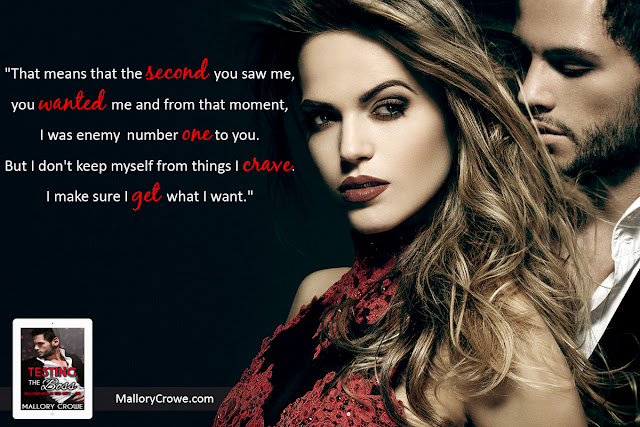 Tell us three behind the scenes facts about Testing The Boss.

1 - Evelyn is named after the author Evelyn Adams. Without her help and support, I probably would not be a published author now.
2 - The cover model on Testing is the same guy who's on Touching. I just loved him so much and, since the characters are brothers who look alike, I made it work.
3 - I was recently in New York City for a few days (previously I'd only been in the city for a few hours at a time). So this is the first book where I could use real life experience to describe the city.

What's the last book you read and loved?

One of my author friends, Cali MacKay, just published the first part of this really cool project called Forbidden about a woman who turns to a mysterious artist on a private island to keep her safe from her deranged ex. Except the mysterious man is actually a set of twins and she starts falling for both without realizing it. Cali's been telling me all about the story as she was writing it and I couldn't wait to get it and read for myself.

Out of all your heroes, who do you want to keep for yourself?

I think Simon from Teasing The Boss might be my favorite. Something about a sexy, redhead nerd alpha. Who also likes dogs...

Your next book Taming The Boss will be the final book in the Billionaires in the City series. What are some of the things going through your mind at seeing this series end?

I'm really more excited than anything. Partially because I don't feel like the series is ending, I feel like I'm opening a new chapter. I can't give too many details yet, but the next series will be a little different in tone, but will still have the strong characters and bite of humor and suspense that the BITC series had. So I'm 100% thrilled to bring this new world to my readers.

What's next for Mallory Crowe?

The last book in the Billionaire's in the City series, Taming The Boss, is coming out January and that shows the Devereaux's dedicated assistant, Cali, going to northern Maine to drag back the black sheep of the family. Needless to say, he doesn't make things easy for her in the best way possible.

Testing the Boss
by Mallory Crowe
Date of Publication: November 19, 2015

Billionaire Luke Devereaux gets what he wants and what he wants right now is to bring down the shady organization threatening his family. Teaming up with the FBI is his only option--even if that option comes in the sultry Evelyn Price, the ice-princess who's all business.

Refusing to be distracted by the sexy, rich playboy, Evelyn forces herself to stay focused on the case, gearing up for the criminal takedown of her entire career. As the enemy closes in with Evelyn as its next target, it's up to Luke to keep them out of danger. The more they work to protect each other, and fight for control, the harder it is to resist their undeniable attraction.

And the one thing Evelyn has learned from working with him is that Luke Devereaux gets what he wants.

"You don't want to work out with me," she warned.

He leaned forward and she realized that she'd made a horrible mistake. "Oh really? Think I can't handle it?"

Great. Now she'd activated his competitive side. "Oh, I think you can handle it. Far away from me, though."

"No! I'm going to be there for the damn phone call, Luke."

"So we are working out together?" She opened her mouth to say no again, but he cut her off. "Because you normally work out right now and we've got nothing better to do. Unless you have any bright ideas?"

She had at least fifty reasons why she didn't want to work out with Luke, and every single one had to do with not wanting him in her space. But she wasn't about to admit it. "You don't even have workout clothes with you," she settled on.

He held up his duffel. "I always have workout clothes with me. I have a treadmill in my office."

"We're not working out," she repeated.

He cocked his head and considered her for a moment. "Do I make you uncomfortable, Agent Price?"

Those blue eyes were on her like a spotlight and she racked her brain for a good lie. Because he did make her uncomfortable. Incredibly, intensely uncomfortable in the worst way. "Of course not."

"Then give me the address and we'll go."

"I'm a member of whatever gym I want to be. You just give me three minutes alone with the manager and I'll be in."

She snorted. "I doubt that. I'm the manager. I have a home gym." 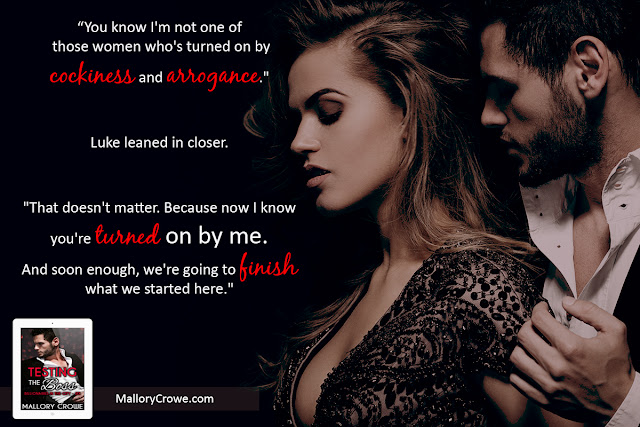 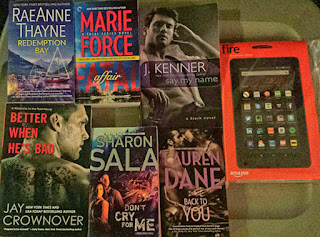 Mallory Crowe has lived in Michigan her whole life and has been in love with romance ever since she'd skip to the end of every novel, just to make sure the hero and heroine survived and ended up together. She lives with her husband and three dogs. When she's not writing, she's spending too much time in front of the TV, hiking, or working with various animal rescues.