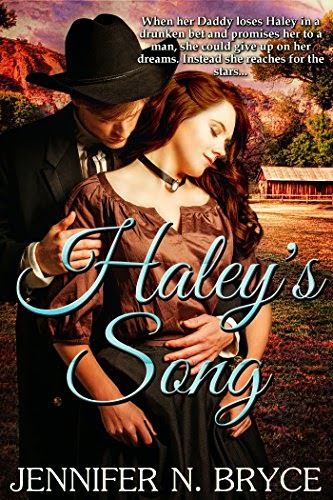 Hayley’s father has a gambling problem that’s now become hers. He lost her in a bet. Now, she must either leave the only place she’s ever known or marry a man who is only interested in a servant he can control.


On the run and scared, she finds sanctuary at a ranch with seven men and one little boy. Though hired as a cook and nanny, she quickly realizes she’s found a home. With brothers, Ben and Tate, vying for her affections, Hayley starts to believe she can have a life that doesn’t involve alcohol, abuse, and gambling. But the winner of the card game has other plans.


Ed Thompson tracks Hayley down, determined she’s going to become his wife. But Tate isn’t about to allow that to happen. He’ll move whatever mountain he has to for Hayley’s safety. And when she’s kidnapped, he’ll tear the town apart to find her. But Ed has an ace up his sleeve that could end up getting Hayley killed.

Haley overheard every word. She rolled her eyes in disgust.  Emma Jean Toulsen drank and messed around with boys on the weekends, but was the first to point out everyone’s sins from the front pew at church.


Malice oozed from the leader of a pack of mean girls who sat in the back of the bus. If Emma Jean Toulsen said jump off a cliff there would be girls lined up at the edge to please her. Haley didn’t cater to Emma Jean’s whims, which made Haley public enemy number one. The groupies were under strict command to take sniper shots at Haley at every opportunity.

Jennifer has a brain that is never quiet (even in her sleep), she uses writing as an escape to be and do anything she can create. Plotting is her favorite thing to do in her down time. Raised in southern Arizona, she was influenced by being raised a cop’s daughter (plenty of teenage angst material there), Mexican food, and the old West. She is a busy mother to three rambunctious boys, married to her amazing cowboy, a full-time nursing student, and desperately needs a long vacation. Her biggest fear in life is to be completely mediocre.