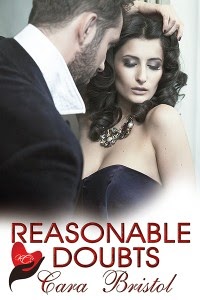 Reasonable Doubts, a Rod and Cane Society romance, has been released and is available from these book sites:
Amazon | Amazon UK | Amazon CA | Amazon AU
ARe | Barnes & Noble

Widow Liz Davenport assumes when she begins to date, her new man will be like her late husband–a member of the Rod and Cane Society and an experienced disciplinarian who can provide her with loving guidance she requires to feel grounded and secure. So why is she attracted to Grant Davis, an ex-Naval  JAG officer who works for her nemesis and has never spanked a woman in his life?
Events in his recent past have forced Grant to take stock of his life and try some new things. But spank a woman? He’s never considered that before, but with Liz’s coaching he’s willing to try.
But when the past collides with the present, will he be able to step up and become the disciplinarian Liz needs?

Please, please, please. Let this mean something. Liz crossed her fingers as she entered Grant’s condo and he shut the door. Weak-kneed with hope and desire, she crept into his living room. When he’d confronted her outside Rod and Cane, he’d been angry, and she couldn’t blame him. She’d treated him shabbily.

Age wasn’t the real issue. Whether a man was older or younger, the actual number didn’t matter as much as maturity and knowledge. And Grant fit the bill.

But could he lead their relationship? Would he, could he take responsibility for enforcing the discipline she craved? Until today, she hadn’t pictured Grant in that role.

The world had tilted when he’d charged forward to protect her from Paul McGinnis. He’d proceeded to throw his weight around, and, although some women might have been put off by his behavior, Liz had gone weak with longing. Begun to second-guess her decision.

Underneath the nice-guy exterior existed a man of mettle. He’d tracked her to the mansion. He’d taken charge over her objections. He’d threatened to spank her.

She’d known he wasn’t serious, but the slip had given Liz hope. If his commanding behavior on the steps of Rod and Cane was any indication, he might be the man she needed. The one who listened to her, guided her, and provided the loving discipline so key to her equilibrium.

But she would have to do her part by being honest and open about her needs.

“You push all my buttons, lady,” Grant said.

Liz sat at one end and crossed her ankles. Grant plopped next to her, his legs spread, his forearms resting on his knees, and studied the floor for a moment. She waited for him to speak. At last, he turned his head. Determination darkened his eyes. “Before we begin—before you begin—let me apologize for what I said out there.”

Liz licked her lips. Her mouth had dried. “You mean about spanking me?”

“Don’t apologize until you hear what I have to say.” She twisted her hands. What if he thought she was a kinky freak? What if he hustled her out of his condo and his life? Liz took a breath. “I did think you were older than you are, but that wasn’t the real issue.”

“In my marriage, there was never any question who was in charge. Otis always consulted with me, but I deferred to his judgment. He led; I supported.”

Liz nodded. “Yes. I assumed when I got involved again, the man would be…traditional…like Otis.” She wasn’t being clear enough. “I figured I would meet someone through the Rod and Cane Society.”
Grant frowned. “Rod and Cane. The mansion we were at?”

“Is that some sort of fraternal organization?”

She nodded. “Otis was president. Jared, whom you met outside, has filled in until an election can be held. I’m vying for a seat on the governance board. It’s a bold move for a conservative—some would say old-fashioned—organization to admit a woman.” Stop stalling. Say it.

“What does the organization do? What’s its purpose?” In a game of Twenty Questions, Grant probably would need no more than a couple to guess the object.

Liz rubbed her hands together. “Rod and Cane supports and promotes domestic discipline. The male members spank their wives.”

Grant blinked. “You were spanked by your husband?”

“Yes.” Relief that came from truth settled over her.

“Wow.” He exhaled and studied the floor. Then his head shot up, and he sought her gaze. “You want me to spank you.”

Grant got to his feet and shoved his hands in his pockets. He paced. “Well, this wasn’t what I expected you to say.” He glanced at her then tossed his head back and laughed. As if she were a joke. She’d bared herself to him, and he laughed at her?

What a jerk. And to think she’d considered him a nice guy. Liz grabbed her purse and sprang to her feet. He’d driven her, but she’d crawl back to Rod and Cane if she had to!

OMG!! I love Cara and her spanking stories and this one is brilliant!

Liz has opened a practice on her own after the death of her beloved husband. The last thing she is looking for is someone new, or at least that's what she thinks. She has missed the partnership and the calming effects of spanking. Maybe after her bid for a potion on the board at Rod and Cane, she will be able to find someone through the club. Although single men are far and few between, a girl can hope.

Grant is new to town. Just retiring from the Navy JAG and beating cancer, he's on a mission to start over and find his biological father. Although he's a go getter in his professional life, when it comes to his personal life, he's very timid. And there is this one woman that has caught his eye, but he just can't seem to make the first move.

As luck would have, fate decides to make it happen. Coffee is flying through the air directly towards Liz and Grant pulls her away before disaster hits. Thankful, Liz makes small talk with this tall drink of water of a man! Even in his running attire, Grant is striking and Liz is all tongue tied. (Not that I would blame her!) Grant asks her to have tea with him again and although she kind of agrees, she's not entirely certain she will. Luckily for Grant, he's got some supporters on his side in the form of Liz's friends.

Their first, sort of date, is great and Liz agrees to a full on date. Grant is thrilled because Liz is everything he's been looking for. Liz is completely attracted to Grant but she's afraid he may be a little too vanilla to give her what she most desperately needs.

As they continue to date, their chemistry is undeniable and as they take it to the next level, Grant shows that maybe he can be what Liz needs, as long as she's honest with him. Once she explains things, Grant is taken back a bit but life without this stunning woman is not something he is willing to let go of just yet.

This book has all the essential elements needed to keep the reader turning the pages. The relationship between Liz and Grant grow and, as with any relationship, there are ups and downs. The angst each must suffer only makes the reader grow more in love with each individual. I really enjoyed this story since it's couple are slightly older then the young twenty-something's we normally see. Well, done Cara!!


Although Reasonable Doubts is part of a series, each one can be easily read their own.

Cara Bristol didn’t start out to become a spanking fiction author. It sort of happened…okay, with five spanking titles under her belt, three under contract, maybe it didn’t just happen. Maybe she likes the naughtiness, the taboo thrill of writing about dominant, sexy men who like to spank their partners. Could be.

Her Breeder science fiction romance series is underway. Book one, Breeder, is available now. Terran will be published in May 2014, and she is working on Warrior now.

Cara  lives in the Midwest part of the United States with her husband. When she’s not writing, she enjoys traveling and reading.