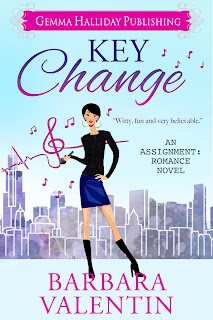 The first thing Sara Cleff, a hard-edged, shower-singing rock music critic, wants to do after following a band on tour is crawl into her nice comfy bed in her well-appointed, optimally located vintage apartment. But before making it home, she learns her roommate-slash-boyfriend has apparently broken up with her while she was away on assignment and sublet their apartment out from underneath her. Ouch! When her key no longer fits in the lock, the last person she expects to find on the other side of the door is Andrew Benet, a wickedly gorgeous music director from a nearby church.

Something about the brash music critic strikes a chord with Andrew, and he offers her the chance to stay on one condition—she has to join the choir at his church. While Andrew may hold the lease on Sara's apartment, does he have the key to unlock her heart?

Up as usual at the crack of dawn, Andrew trudged to the bathroom, almost forgetting to close the door behind him before he spotted Sara's bangles on the counter next to the sink. Reaching over, he shut the door and locked it.

Fifteen minutes later, he was showered, clean-shaven, and ready to go, except he didn't have to be at the church until four-thirty that afternoon. Unplugging his phone from an outlet in his room, he brought it with him into the kitchen, transferred Sara's clothes that she had washed the night before into the dryer and poured himself some coffee. He sat on a barstool, debated throwing a sweatshirt on over his plain, blue, short-sleeved T- shirt to ward off the chill, but started scrolling through his email instead.

His eyes, however, kept drifting over to Sara, out like a light on the sofa sleeper.

While most of her was wrapped in the blankets like a human burrito, with the sun starting to break through the bare branches of the ancient oak tree blocking the expansive bay window, he could see her face quite plainly.

Without all that the heavy dark makeup, he noted, she looked younger.

But then again, she wasn't talking.

Still, he was glad he invited her to stay the night before.

But what about tonight? And tomorrow night? And the night after that?

While he mulled the possibilities, she rolled over and stretched, arching her back and groaning as she did. Resuming her curled-up burrito pose, she opened her eyes and mumbled, "How long have you been sitting there?"

Looking at his watch, he admitted, "About a minute. Or five. Maybe ten." His cheeks suddenly felt a lot warmer.

With a loud yawn, she sat up. "I slept so good." Patting the thin mattress with her hand, she added, "So comfy."

The words hung in the air between them.

Still, the sight of her in his pajama top seemed to lobotomize him. All he could do by way of a reply was nod.

With a shrug, she added, "Seriously, on a sleeper sofa—who knew?"

Snap out of it.

With no small amount of effort, he turned and glanced at the dryer. "Your clothes should be ready in about twenty minutes."

At that, Sara took a deep breath and yanked the covers back, revealing two impossibly long bare legs as she flung her feet to the floor.

Knowing full well that the sudden blast of heat he felt was not delivered by way of the gilded vents along the floorboards, Andrew got up to check the thermostat on the wall next to the upright piano anyway, mumbling, "Gotta love old buildings." 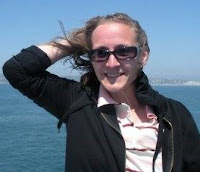 Barbara is an award-winning novelist and second-generation journalist. After spending a decade in maternity clothes, she has five boys to show for it and much fodder for her column, The Plate Spinner Chronicles, a long-running feature in the Chicago Tribune.

A member of RWA's Windy City chapter, she still dreams of the day when her to-do list includes "Send NY Times book critic thank you note" and "Accept Godiva's request to be a taste-tester."