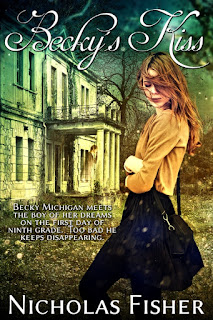 "It could not be worse for ninth grader Becky Michigan on her first day at a new school, sitting in beet juice and staining her white jeans in a classroom about to fill up with students. In the nick of time, a gorgeous blonde boy named Danny comes in and offers his over-sized baseball jersey so she can cover up, get to the office, and change. By the time she pulls the shirt over her head, however, he has mysteriously disappeared.


Becky scours the school in search of her dream-athlete and wonders why after contact with him she has magically gained the ability to throw a fastball ninety miles per hour! Instead of finding the answer, however, Becky's new skill pits her against the school bully and the entire varsity baseball team.


That night, after her exciting showdown in front of the entire school, Danny shows up at her bedroom window. If she will agree to meet him behind Rutledge High at midnight on the ball field at the edge of the woods, he promises to reveal a secret meant to alter the past and change her life forever." 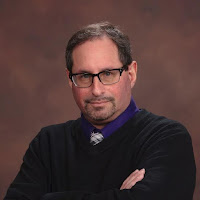 Nicholas Fisher is a college professor and a sports enthusiast. He writes adult horror under another name, but thought of the idea for Becky’s Kiss while coaching his son’s baseball team. Since the story involved high school drama he decided to write his first young adult piece. When not writing or teaching, Nicholas Fisher enjoys pizza, reality television, and playing the banjo. He lives in Pennsylvania with his wife and his son goes to Arizona State University.

1. If your book was made into a movie, who would play the main character roles?

Absolute unknowns. In fact, one of the themes of my book is that the unpopular klutz’s of today are tomorrow’s heroes.

2. What kind of music do you listen to while you write?

None. I am old school in that I write in silence. My favorite type of music, however, is metal, no Scream-o however.

3. What is your favorite part of writing?

Reading what I wrote the next day and remaining amazed that it came out ok.

4. What is the most important thing in your life and why?

My family. My wife is my best friend and my son is my hero.

5. If you could go out to lunch with any literary character, which would it be?

The old guy in “The Old Man and the Sea.” Just so I could tell him I appreciate his big catch that he thinks no one will ever know about.


Becky finds one of her classmates to sit with at lunch, and something weird happens.

There was only one place left to sit in the crowded cafeteria, at the empty table by the trash cans next to the concrete support beam that had a poster of Frederick Douglass on it. It was an old science desk at the edge of the walking aisle separating the two halves of the room, and one of its legs was broken at the base. The wobble-table. For losers.

One kid was sitting there, the Asian boy from English class. He had stuck his math book under the short leg, and was politely sipping soup, robotic and rigid, nothing else on his tray but a couple of pieces of fruit. Becky walked over, pulled out the chair across from him, and slipped off her backpack.

He was startled, but clearly glad he had a visitor.

“Joe,” he said. “Joey Chen.” He smiled then, and even though he had funny teeth, the expression had an interesting effect, like craft-show glass, like sidewalk art. His eyes glinted. “You,” he said, “are Becky Michigan.”

He looked down at his soup.

“I am from China. I been here one year, three months, eleven days.”

Becky sighed. A whole year and he was eating lunch alone. And counting the days.

Becky sighed again, and then something hit her in the ear. The projectile rolled and wobbled across the table, settling at the far edge. It was a grape. A purple grape.

Another one struck her right on the end of the nose, leaving a hint of moisture, making her blink stupidly, and yet another plinked off her forehead. So immature! Bullies, oh yes, Joey had a point now didn’t he? She pushed back her chair and looked over in the general direction of the assault. There, across the aisle and about eighteen rows down, was Cody Hatcher, the big kid who had been teasing her in English class, sitting at the edge of the table with what seemed to be four of his idiot friends, all of them laughing like hyenas, one stamping his foot he was so overcome with the hilarity of it all. Hatcher stopped and looked right at Becky. He reached in front of him and took a purple grape off the stem. He put it in his mouth and chewed real slow. Swallowed. Licked his top lip and winked. Then his friends were laughing again, slapping him on the back.

Becky didn’t think, she just acted. Joe didn’t have time to move. In a flash, she reached across the table, knocked over his milk, grabbed his orange, and pivoted back, side-stepping into the aisle. She had a split second to look at her target, and Hatcher had his mouth open, all teeth, eyes up at the ceiling he was laughing so hard.

She kicked up a knee and spread her hands, throwing-arm dangling way low behind her. There was a moment of perfect balance there, and then her body became a machine: all hot fluid and angry levers. She stepped into it deep, cocked up her arm, snapped her hips, and fired.

The orange flew out of her hand as if on a clothesline. Even through the noise, she could hear it hiss through the air, and heads turned with it as if in slow motion. Hatcher had just enough time to adjust his eyes from the ceiling and focus on what was coming. It hit him square in the forehead with a hard splat and his hands flew up. It knocked him straight back out of his chair, and the fruit ruptured in a blast of spray and peel.

People roared. Gossip exploded, and Becky could hear a lot of “Did you see that?” and “Who is that girl?” and “What happened?” and “Did you see how freakin’ hard she chucked that?” Everything was echoing, sounding unreal, and the teachers on lunch duty were darting their eyes all around to pinpoint exactly where the disturbance was. Becky got back in her chair, and Joe had his mouth open.

Becky was trying not to shake.

“He had it coming,” she managed.