Happy Book Birthday to Soul of Dust and
Adam Millard! 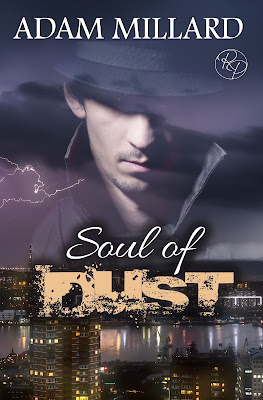 Jack Bridge is having a very bad day.

Kate West, beautiful and complex in equal measure, with a problem only Jack can solve. Daemons, magic, voodoo, and vamps; it’s all very real, and Jack Bridge is the last line of defense against the creatures of Elsewhere.

Adam Millard is the author of twenty novels, ten novellas, and more than a hundred short stories, which can be found in various collections and anthologies. Probably best known for his post-apocalyptic fiction, Adam also writes fantasy/horror for children. He created the character Peter Crombie, Teenage Zombie just so he had something decent to read to his son at bedtime. Adam also writes Bizarro fiction for several publishers, who enjoy his tales of flesh-eating clown-beetles and rabies-infected derrieres so much that they keep printing them. His "Dead" series has recently been the filling in a Stephen King/Bram Stoker sandwich on Amazon's bestsellers chart. Adam writes and edits for UK horror website This Is Horror, whose columnists include BC Furtney, Simon Bestwick and Simon Marshall-Jones.

Adam lives with his beautiful wife, Zoe-Ray, and their wonderful son, Phoenix Justice. There are also chickens, rabbits and cats, but the less said about that the better.

Giveaway!
A paperback copy of Soul of Dust and a $10 Amazon Gift Card!


Open only to those who can legally enter, receive and use an Amazon.com Gift Code.  No purchase necessary, but you must be 18 or older to enter. The winner will be chosen by rafflecopter, and announced on the widget. Winner well be notified by emailed and have 48 hours to respond or a new winner will be chosen. The number of entries received determines the odds of winning. Giveaway was organized by Roane Publishing's marketing department.