An all new Standalone novel from Zoe Lee is now Live!!

The deeper they look, the harder they fall.

Leda has awesome brothers, friends who are as allergic to emotions as she is, and a great job. She’s back in her hometown, Maybelle County, after a romantic and professional disaster three years ago in Nashville. It might not be what she planned when she was a teenager, but it’s perfect.

Or, well, it’s almost perfect. Because Leda is still angry and bitter about Nashville, and everyone knows it. She hates romance and doesn’t do relationships, and her younger brother’s trying to get her to be nicer. But she’s not nice. She even has her own hashtag: #ledagoesnuclear.

Then she sees Jamie again, when he’s between serious girlfriends, and discovers that the chemistry she’s always suspected is right there, ready to explode if she lets it.

Jamie is a serial monogamist who’s always liked Leda, but the timing’s never been right. After he sees her while they’re both single for the first time since high school, he knows he wants to be with her. Everybody knows she doesn’t date and doesn’t get serious, but he’s always serious, especially because he has a three-year-old son and a three-hour commute to get from work to Leda.

What starts out as a casual Thursday night arrangement gets messy when Leda and Jamie also have interfering friends, sad brothers, a pushy mom, an amazing son, and chemistry so intense it’s scary.

How does a man who needs forever win a woman who hates romance? 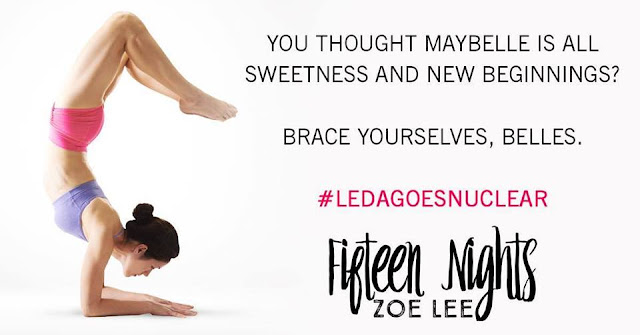 I stalk-strolled towards her, my patience stretched paper-thin by desire.

I crowded close, so tall and wide that she couldn’t see anything else but me, and my hand cupped her waist. She stumbled against the wall, her feet wide apart to keep her balanced.

“You’re so damn tall,”I murmured. Still a few inches shorter than I was in her heels, she angled her head back, her hair scraping the textured wallpaper, to meet my eyes again. My thumb stroked in arcs over her hips and I saw her try to suppress a shiver. “You must be six-three in those heels. Usually I can’t look a woman in the eye unless we’re lying down.

”Her eyes flashed fire and she asked belligerently, “Are you going to keep me here till midnight?”

I ran my fingertips down her earlobes and chandelier earrings, not bothering to confirm what was obvious. I knew she didn’t want to go anywhere either. If Leda Riveau didn’t want to be somewhere, she sure as hell would’ve told me so and moved.

When the crowd screamed and chorused “Happy New Year,”I half-smiled.

My face dipped until the tips of our noses grazed together, testing the boundaries, and when she only parted her red lips, I laid mine against them for the first time.

Light flickered behind my closed eyelids as her mouth softened a fraction.

But I didn’t want her soft, I wanted her fierce and dynamic, so I caught her around the waist. My voice dropped in volume and register while I demanded, “Kiss me harder, Leda.”

Her arms wound around me and her nails dug into my neck, scratching hard as she swooped in and bit at my bottom lip before her nimble tongue pushed into my mouth.

I couldn’t have stopped the heartfelt moan that escaped into the air between our open lips.

But at the noise, she pulled back sharply and looked at me, brows creasing. I didn’t know what had made Dunk say what he had, but I knew plenty of gossip about everyone in Maybelle, and I’d never heard so much as a word about her sleeping around.

I wanted to reassure her, but I knew that the usual platitudes about how she was beautiful and Dunk was a fucking idiot wouldn’t work because they’d make her feel too vulnerable. My best shot was probably self-deprecation, to shift the attention to my shit and away from her.

So I hooked her hair behind her ears, smoothing the disarray I’d caused.

“Do you know how many women run from this?”I pointed at my eyes. “I always have to hide it. I haven’t been able to do that with you tonight, and all you’ve done is stare right back.”

“I, uh, like it. It makes me feel special,”she practically stammered. “And that’s incredibly…”She swallowed, her eyes dipping down to my mouth again. “…tempting.”

My gaze sharpened with desire. “I would like to make love with you.”

She jabbed a finger in my chest. “You cannot call it that,”she ordered. “No bullshit about how you were moon-eyed over me half our lives ago when we didn’t know shit about shit.”

I grabbed her finger and reeled her in.

“You can stare at me all you want,”she half-babbled, “but this is just good chemistry.”

Zoe Lee brings us back to Maybelle County with her second book Fifteen Nights and this time we get to know the feisty Leda Riveau.

Leda is the loud mouth, get in your face, tell it like it is, take no prisoners Riveau sibling. To those closest to her she is fiercely loyal and extremely protective. Some may not like her brash attitude, but I think her passion makes her endearing.

Jamie Houston is what some people call a serial monogamist, but really he's just been biding his time until he can make a move on the one girl that captured his heart many years ago. He's devotion to his child is compelling. His persistence is riveting, no matter how much Leda pushes he stays. He's heart is true and that's what I love about him.

The chemistry between to two is like fire, with the flames flying off the pages. It's hot, steamy, and intense. They each have issues to work through, but they can't deny their connection.

I love Jamie and Leda, but also all the supporting characters. This close knit group of individuals know how to take care of each other and support one another. They're friends that feel more like family.

Fifteen Nights  is an enthralling book I highly enjoyed and couldn't put it down. I can't wait to see what Zoe will bring us next. 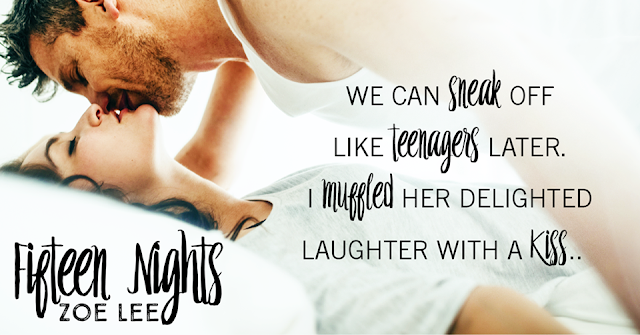 Zoe has been writing since she was a little girl, growing up north of Chicago. Since then, she's lived in Ohio and San Francisco, and now lives near Boulder. She has a job that she loves, but it doesn't sound exciting to anyone else. She does yoga and takes dance classes when she can. She has a husband, who reads her romances, and an amazing little girl, who is way too young to read what Zoe writes (yet). She's inspired by her family and friends, books and art, and all of the places she's traveled. 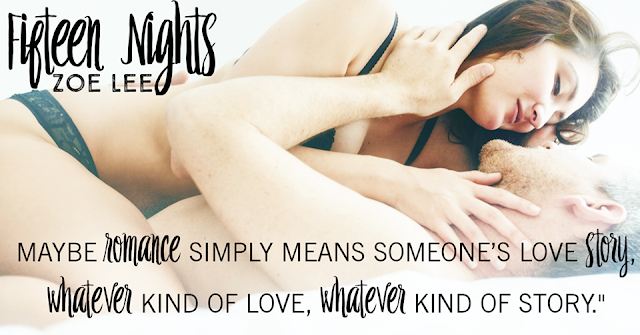