Blog Tour ~ The Duke of Lies, The Untouchables #9, by Darcy Burke

The Duke of Lies, an all-new historical standalone from USA Today bestselling author Darcy Burke, is coming May 29th!

Verity Beaumont has suffered domineering men most of her life, first with her father and then with her husband. Free from both men, she has finally found peace. Even meeting a kind and hard-working gentleman who just might be the perfect father her young son so desperately needs. But as she dares look to the future, her carefully ordered world is shattered when her dead husband returns.

Imprisoned in America during the war, Rufus Beaumont, Duke of Blackburn, wants nothing more than to return to his native England. He longs for comfort and safety away from the horrors of battle, only the life he returns to is not the life he left. He must convince his wife that their marriage is worth fighting for, that he’s not the man he was. But when the truth about what happened to him leaks out, he must prove that not everything about him, especially his love for her, is a lie. 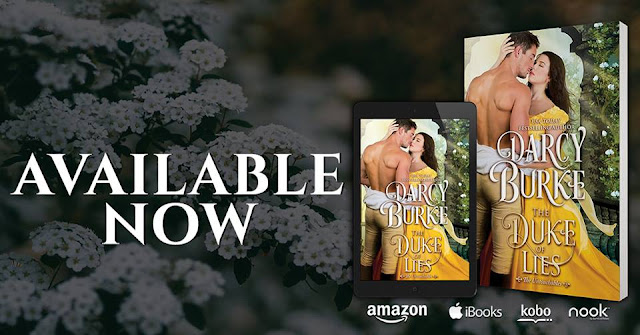 The day was warm and bright, and she was looking forward to being outside. The door she’d come through suddenly burst open. Beau dashed out, his laughter immediately filling the courtyard.

He was quickly followed by Rufus, who chased him along the edge of the garden to the center path. Beau didn’t slow as he rounded the corner, and his feet slipped on the cobblestones. He fell down, landing on his side.

Verity dropped the blanket and ran toward him, but Rufus beat her by quite a bit. It was then that she realized he hadn’t been using his top speed to chase the boy. She’d seen that when he’d caught Racer that day at Mr. Maynard’s farm.

Rufus picked Beau up and set him on his feet and squatted down in front of him.“All right?”

Verity had expected Beau to cry, and his face had gone slightly pale. She lowered herself next to Rufus.“Did that scare you?” she asked, stroking Beau’s arm from shoulder to elbow and back again.

Beau nodded. Then a moment later, he ran to the top of the stairs leading to the courtyard.“Comeon, Papa, catch me!”

Rufus stood and offered his hand to Verity to help her rise. She wasn’t wearing gloves, and neither was he. It was the first time their flesh had touched, and it was like grabbing lightning. Or how she imagined it to be—electrifying and hot, and it left a lasting impression.

“Please don’t chase him down the stairs. He already fell once.” She turned to Beau and called,“Please be careful.”

“I am being careful, Mama. And don’t worry about the stairs. I ran down them to the kitchen passage and didn’t fall.”

She looked over at Rufus.“Isthat right?”

His gaze drifted to the side, and he hesitated a moment.“Er,yes. We were playing knights and villains.”

“Which one were you?”

“It was my turn to be the knight.”

Verity frowned and shifted a glance toward Beau.“Idon’t like thinking of my boy as a villain.”

“It’s pretend,” Rufus said.“But if it makes you feel better, he only chooses to be the villain because he likes to be chased.”

“Can’t the villain chase the knight?”

His mouth tipped into a crooked smile, and her stomach did a flip. It was as if lightning had struck again.“It’s pretend. We can do whatever we like.” He looked back toward the basket and the blanket on the ground.“I’ll get the things for the picnic.” He turned and started along the path.

“I can grab the blanket,” she offered.

Verity went to Beau instead. She took his hand, and they descended into the courtyard, then veered right toward the gateway to the stable yard.“Perhaps I should play knights and villains.” She wondered why they hadn’t done that before and felt bad. It was a stark reminder of how much he’d missed not having a father.

Rufus met them as they approached the gate.“What’swrong with your mother being a girl?”

“She wants to play knights and villains.” He made a face that clearly showed what he thought of that idea.

Verity was caught between laughter and disappointment.

“It would be better if she joined us,” Rufus said, drawing Beau’s sharp attention.“A knight needs a fair maiden to rescue.”

“Then I am definitely going to be the villain. I don’t wanna rescue a girl.” He frowned, then sent his mother an apologetic glance.“Except I do want to save you, Mama.”

Verity surrendered to the laughter. “Thank you.”

“But Papa should be the one to save you. That’s what dukes do, right?”

“That’s what husbands do,” Rufus corrected,“whether they are a duke or not.”