Because of her stepsisters, Eve Jamison is driven from her hometown in scandal with a train ticket in one hand and a proxy marriage license in the other. But when she arrives in the small Colorado mountain town, she discovers her groom recently died. Even though she never met her husband, the new widow learns she is quite wealthy. At the mercy of her dead husband's moneygrubbing family, Knox and Jed Dare each vow to protect her. They both want the beautiful bluestocking and refuse to cede way to the other.

Eve has other ideas where the two men are concerned. Because she is now a woman of Slate Springs, she doesn't have to choose. She wants both Jed and Knox... and gets them.

If you're life resembles Cinderella and not in the good way, then maybe being forced out of your home and town could be a good thing.

Eve didn't know what to expect when she stepped on the train toward Slate Springs. Unfortunately for her, her would be husband passed away suddenly before she ever got a change to meet him. However, fortunate is in her favor when two brothers came to accompany her the last leg of her journey into Slate Springs.

The Dare brothers recently moved into Slate Springs after tracking down their headstrong sister. When they went to pick up the new Mrs. Thomkins, they never expect to encounter the woman before them. Knox and Jed have never quarreled over a woman before, but there is always a first time for everything.

Eve never expect the turns her life has taken, nor that two men would catch her fancy. However, for once in her life she is going to take what she wants. And Knox and Jed couldn't be happier about it.

I really this Cinderella like story. Eve is woman that has been constantly told she would never attract a man, let alone become anything special. But once she's away from her past, she blossoms into a strong, independent, honest, witty woman that isn't afraid to finally stand up for herself.

Knox and Jed are no slouches either. They have a nice home, a prosperous job, a loving group of family and friends. Although they never expected to partake in the town law of marriages, but once they idea was planted they took to it wholeheartedly. They both fell for the lovely Eve and the need to love and protect her is undeniable. And I love how they support Eve and give her strength to finally stand up to her evil stepsisters.

This series just keeps getting better and better. I enjoyed getting to know this wicked woman and watching her come into her own. She like Cinderella finding her Prince Charming, or in Eve's case two Prince Charmings.

Available Now In The Series 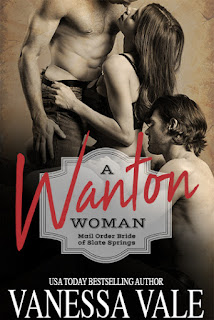 Celia Lawrence can't show her face in her conservative, small town. First, she discovered her husband in bed with another man's wife, and then she witnessed both their murders. While she didn't pull the trigger, small town gossip is not forgiving and everywhere she goes she is chastised for not being woman enough to keep her straying husband at home. Eager to flee her old life, Celia heads to Colorado as a mail-order bride.

As mayor of Slate Springs, Colorado, Luke Benson is expected to set the example. Their small town is hidden away in a remote mountainous region where few women have the courage or desire to tread. As mayor, it falls to him to test out their newly passed law and share a wife with his brother. The truth is, Luke has no interest in a woman of his own, and agrees to a mail-order bride out of duty, not anticipation.

His brother, Walker, is jaded and hard after the death of his first wife and unborn child. For Walker, loving again is out of the question. But a man has needs, and he'll eagerly take his pleasure from their new bride while expecting Luke to provide the tenderness and caring a woman expects.

A marriage based on everything but love should be doomed. But Celia, Luke and Walker discover one thing they have in common: desire. Will that be strong enough to survive the danger that follows Celia from Texas? Will desire be strong enough to teach the three that sometimes you have to risk everything for love? 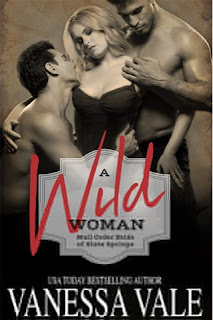 With five overbearing brothers, Piper Dare heads West in order to forge her own life. Her trip takes an unexpected turn when she fills in as a mail order bride for a woman she meets on the stage.

Lane Haskins and Spur Drews are stunned by their new bride. A gun toting, foul language spewing redhead is not what they expected. But they don't mind the little wildcat. In fact, they love her instantly.

But their match takes a decided turn and their love—and devotion—is put to a very powerful test.

Vanessa Vale is the USA Today Bestselling author of over 30 books, sexy romance novels, including her popular Bridgewater historical romance series and hot contemporary romances featuring unapologetic bad boys who don't just fall in love, they fall hard. When she's not writing, Vanessa savors the insanity of raising two boys, is figuring out how many meals she can make with a pressure cooker, and teaches a pretty mean karate class. While she's not as skilled at social media as her kids, she loves to interact with readers. You can find out more about Vanessa at vanessavaleauthor.com