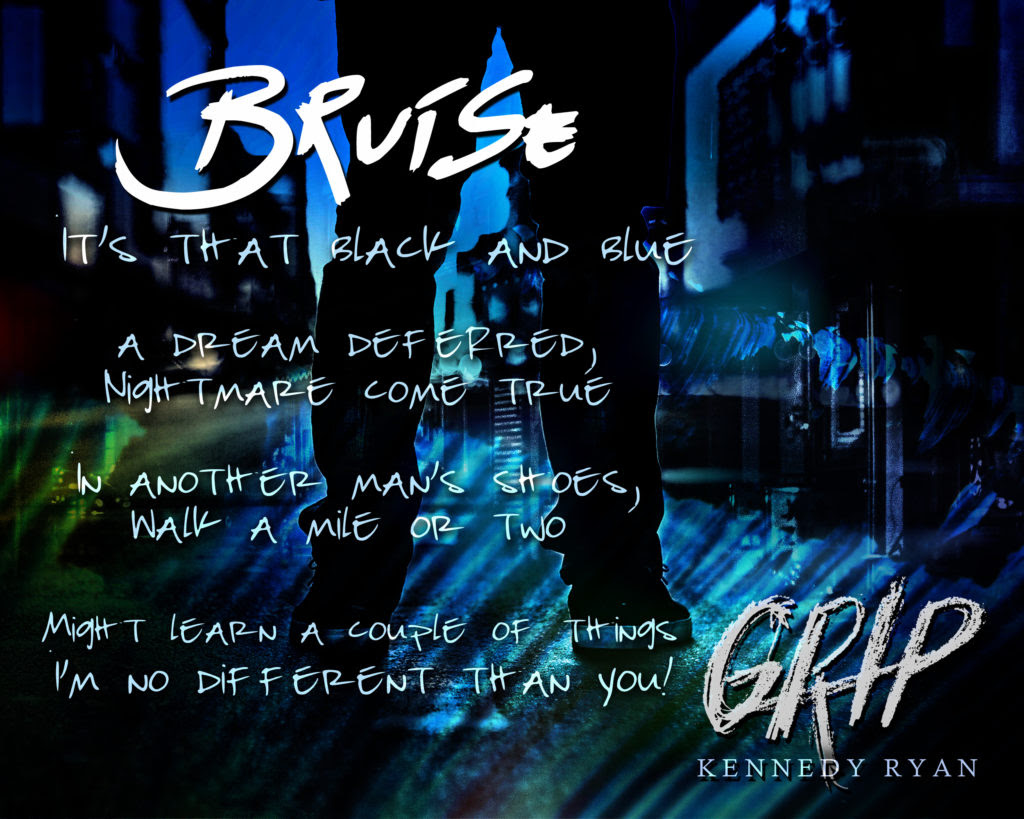 Kennedy Ryan shares a special post on the inspiration behind "Bruise," the original piece written for her latest release Grip.

(Scroll to the end for the full poem & a signed paperback giveaway.)

“Am I all of your fears, wrapped in black skin?”

The cursor flashed a warning at the end of the line I’d just typed. Read on its own, the words seared the page, an incendiary challenge. A jagged line in the sand that could shove half my readers to one side, and half to the other. I needed to be careful. I wanted to be fearless. I had to be honest.

The hero of Grip, my latest release, Marlon James (Grip to his fans), is a rising hip-hop star, but he’s more than that. He’s a lyricist and a poet. He’s a black man, concerned about black men vulnerable to cops who should be protecting them. He admires officers who run toward danger when most of us run away.

He wonders what he can do to bridge the gap between the two.

I took several risks writing Grip, confronting, in the context of a love story, prejudices that are often blatant, but sometimes remain hidden even from ourselves. No issue weighed heavier on my mind than that of black v. blue. In the story, Grip gets stopped DWB. Driving While Black, for those unfamiliar. Probably somewhere else in mainstream romance, readers have sat behind the wheel in a black hero’s perspective, glanced in the rearview mirror, seen those blue lights flashing, and wrestled with the fear, frustration and anger born from years of being stopped for no reason...but I haven’t read it. And as I wrote it, I remembered my own husband’s accounts of being stopped most of his life; of him and his friends lying on their stomachs on the ground while their cars were searched. I recalled the first-hand accounts I’d read of black and Hispanic men, even in the last few months in LA, Grip’s hometown, stopped and searched so much more than their counterparts. But I also thought of my friend’s husband, a good cop, a good man who faced down fear every day to protect people like me. Of her anxiety when tragedy strikes, when travesties happen. Incidents that I watch on television from the safety of my couch while her husband wades knee-deep into danger.

I wanted to tell both sides of this story. I didn’t want to debate or persuade. I wanted readers to listen; to hear the other perspective. To consider. To understand. To empathize. These are the building blocks of resolution. Our country is more divided than we’ve been in a long time, and many of those divisions still, sadly still, fall along the lines of race. I don’t know how we resolve anything in this current climate. I don’t think we do unless we exchange perspectives; manage to communicate with one another in lower decibels, in reasonable thoughts, in something besides shouty caps on Facebook and Twitter.

In Flow, the prequel to Grip, Bristol, the heroine says, “...before we say our words, they’re ammunition. After we’ve said them, they’re smoking bullets. There seems to be no middle ground and too little common ground for dialogue to be productive. We just tiptoe around things, afraid we’ll offend or look ignorant, be misunderstood. Honesty is a risk few are willing to take.”

And yet it requires honesty, and giving each other grace to speak with candor and respect, even if sometimes ineloquently. It requires that we step into the other’s shoes. Usually, we are not all right or all wrong. We are more nuanced than that; the issues more complex than black and white.

Or in this case, black and blue.

This story models that, I hope. In my small corner of the world, with the only tools at my disposal, my pen and my voice, I hope I demonstrated that. I hope someone on one side of that jagged line in the sand understood the person across from them a little better after reading Grip  This wasn’t about my personal outrage; my indignation as I watched black men gunned down this summer during traffic stops. It wasn’t about my horrified grief as I watched cops in Dallas ambushed, killed. It wasn’t just about either, and it was completely about both. One of my favorite communicators says sometimes we choose between making a point and making a difference. I really hope, in some small way, the words to “ Bruise,” the original piece I co-wrote with a spoken word artist for this book, volley right past just making a point, and manage to make a small difference, even if the only difference is that one person chooses to listen and tries to understand. There are so many other things I could say; so many statistics I could cite to sway you to one side or the other. But instead, I’ll let “Bruise” speak for itself.

And for those on both sides of that jagged line in the sand.

For more on the role of race in Grip, check out Mara White's piece in The Huffington Post.


Signed paperbacks of Grip & Flow, the prequel, are up for grabs on Kennedy's Facebook page!

Am I all of your fears, wrapped in black skin,

Handcuffed on the side of the road, second home for black men

PoPo pulls me over with no infractions,

Under the speed limit, seat belt even fastened,

Turned on Rosecrans when two cruisers collapsed in

I know cops got it hard, don’t wanna make a wife a widow

They say it's ‘Protect & Serve’, but check my word

They say if you ain’t doin’ wrong, you got nothin’ to fear,

It’s that black and blue

In another man’s shoes,

Walk a mile or two

I’m no different than you!


You call for the good guys when you meet the bad men,

When I patrol the block, I can sense dissatisfaction

There’s distrust, resentment in every interaction,

Whether the beat cop, lieutenant, sergeant or the captain

We roll our sleeves up and we dig our hands in

I joined the force in order to make a difference,

Swore to uphold the law, protect men, women and children,

These life and death situations, we make split-second decisions

All for low pay, budget cutbacks and restrictions

We’re ambushed in Dallas, now where’s all the chatter

Not just a job—it's a calling, a vocation,

And yet you call me racist? You wanna trap me with your phone?

I’m just a man with a badge trying my best to make it home.

It’s that black and blue

In another man’s shoes,

Walk a mile or two

I’m no different than you!

"The story reads like a movie . . powerful and intoxicating ... and sinfully sexy. Grip has everything—dynamic characters, soulful plot, and a lesson at the end that will change the way you look at life. One of my favorite reads this year. Maybe ever. 5 massive, gripping stars from me!" -- Adriana Lock, USA Today Bestselling Author 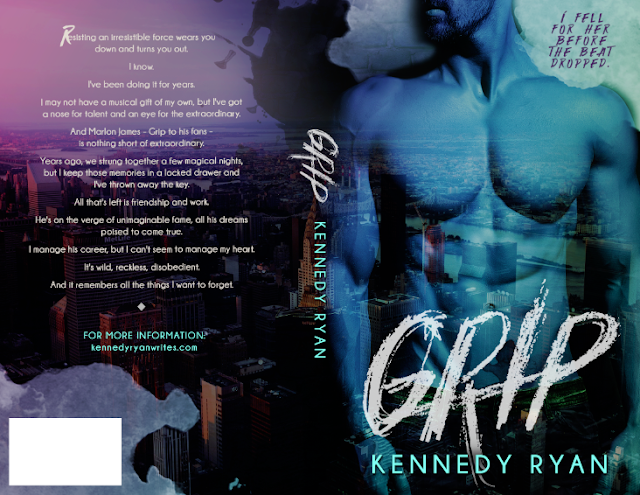 Resisting an irresistible force wears you down and turns you out.
I know.
I’ve been doing it for years.
I may not have a musical gift of my own, but I’ve got a nose for talent and an eye for the extraordinary.
And Marlon James – Grip to his fans – is nothing short of extraordinary.
Years ago, we strung together a few magical nights, but I keep those memories in a locked drawer and I’ve thrown away the key.
All that’s left is friendship and work.
He’s on the verge of unimaginable fame, all his dreams poised to come true.
I manage his career, but I can’t seem to manage my heart.
It’s wild, reckless, disobedient.
And it remembers all the things I want to forget.

Check out the Teespring Campaign

Listen to the playlist on
iTunes | Spotify 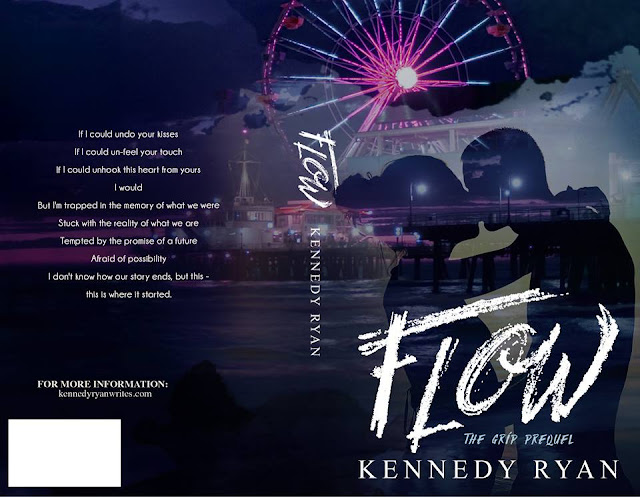 In 8 years, Marlon James will be one of the brightest rising stars in the music industry.

Bristol Gray will be his tough, no-nonsense manager.

But when they first meet, she’s a college student finding her way in the world,

and he’s an artist determined to make his way in it.

all the things that should separate them only draw them closer.

It’s a beautiful beginning, but where will the story end?

Flow is the prequel chronicling the week of magical days and nights that will haunt Grip & Bristol for years to come.

Kennedy loves to write about herself in third person. She loves Diet Coke…though she’s always trying to quit. She adores her husband…who she’ll never quit. She loves her son, who is the most special boy on the planet. And she’s devoted to supporting and serving families living with Autism.
And she writes love stories! 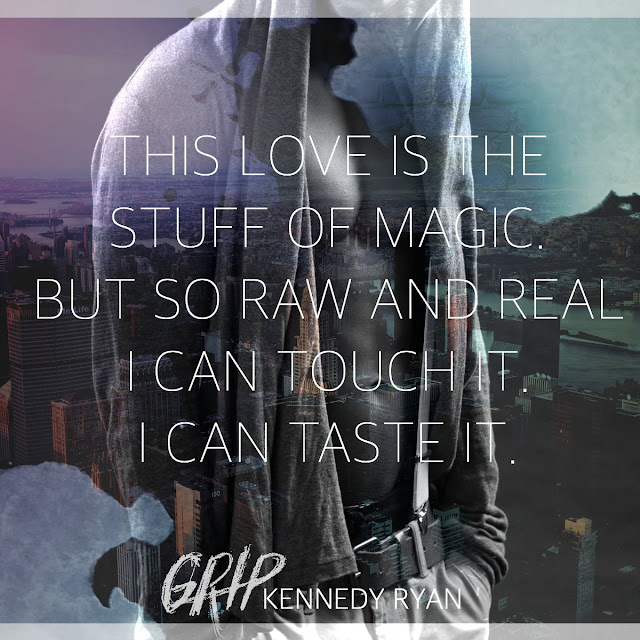