Notting Hill meets The Prince & Me in Icing on the Cake, the second standalone laugh-out-loud romance in Ann Marie Walker’s Wild Wedding series

Cassandra Miller doesn’t have time for men. She’s far too busy trying to open a cupcake shop with her silent partner and best friend, not to mention catering her brother’s wedding. And let’s face it, it’s not like Prince Charming is going to stroll into the bakery and sweep her off her feet.

Henry has been a prince his entire life but for one wild wedding he wants to be nothing more than an “Average Joe”, or in this instance, “Average Hank”. However, when a case of mistaken identity and a batch of burned cupcakes ends in a night of passion, Cassie and Hank must decide if theirs is a recipe for disaster or the makings of true romance. 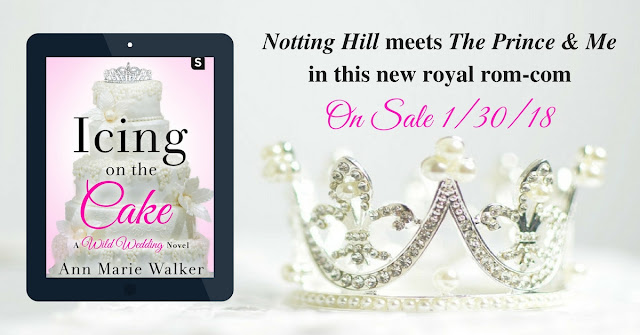 
His fingers rested on her hips, barely touching her, and yet she felt as though she were melting into his hands. Without thinking, she wrapped her arms around his neck and pulled him closer. She wanted to feel the weight of him against her, to know he was as affected by her as she was him. He pressed against her and she felt the shape of him, hard against her softness, and she couldn’t help but wonder how long he’d been that way, if this perfect man had wanted her this whole time as badly as she’d wanted him.

When he broke their kiss, she was more than ready for whatever came next.

“Come up to my room,” Hank breathed. His lips moved over her jaw and down her throat, leaving a trail of feather light kisses that left her aching for more. “I have a lovely four-poster bed that’s far too big for one.”

His room, his bed. Sex in his bed. She couldn’t pretend she didn’t want one wild night with this handsome stranger, but sex in a bed was so . . . so . . . normal. She’d done normal. And although normal sex was better than no sex, something told her that the man in front of her was offering good sex, and that was something that was long overdue.

Cassie blinked hard. She took a moment to gather her composure, but like her resistance it was currently scattered all over the bakery floor. Hmm, the floor would work just fine.

When she didn’t answer he pulled back, slipping a finger under her chin and lifting her eyes to his once again. “Shall I take that as a yes?”

“Why can’t we just stay here?” Her voice sounded as shaky as the rest of her. But it wasn’t from intimidation or nerves. On the contrary, for the first time in her life Cassie felt strong and fearless and brave. Still, something about this man made her tremble in the most delicious way.

His eyes glowed with a mixture of amusement and lust. “Believe me, luv, I’d like nothing better than to take you right here, against this door.”

Her heart hammered inside her chest. Did he really just say that? And in an accent that was nearly enough to finish her off? Who was this man who had come into her life as if a direct answer to Olivia’s outrageous suggestion? The images her friend had conjured two days prior flooded her senses. Oh yes, that was exactly what she wanted. Right then and there.

Lucky for her, Hank was a bit more aware of their surroundings. “But those windows don’t have any curtains,” he said, nodding over his shoulder. “And I would hate for some random pub-goer to get an eyeful of your beautiful curves as he stumbled home.”

Sex god and a gentleman? This guy was too good to be true.

A momentary frown drifted across his face until realization took hold. He leaned closer and whispered roughly against her ear. “Let’s go up to my room, so I can make you come all night.”

Holy hell, that he didn’t have to offer twice. 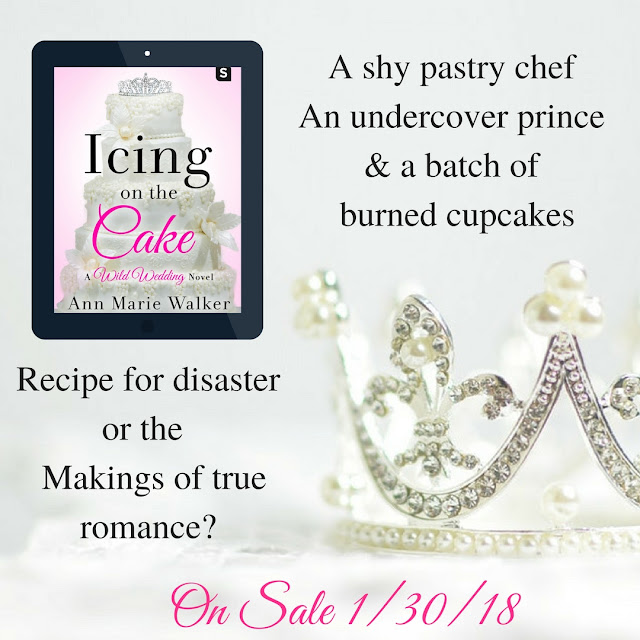 Ann Marie Walker writes steamy books about sexy boys. She’s a fan of fancy cocktails, anything chocolate, and 80s rom-coms. Her super power is connecting any situation to an episode of Friends and she thinks all coffee cups should be the size of a bowl. If it’s December she can be found watching Love Actually but the rest of the year you can find her at AnnMarieWalker.com where she would be happy to talk to you about alpha males, lemon drop martinis or supermodel David Gandy. Ann Marie attended the University of Notre Dame and currently lives in Chicago.