Happy Book Birthday To
Reality Ever After! 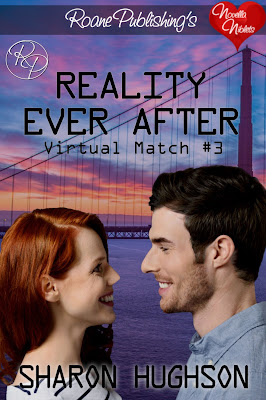 Happily ever after collides with reality to make or break their love.

Systems architect Marcus Jordan proclaims his love for career girl Veronica Shay, but life keeps hurling obstacles into their relationship. When Ronnie’s niece is born prematurely, Ronnie rushes to be the big sister Tony needs, knowing she is to blame for his fear of failing at fatherhood.

Marcus decides to help put their daddy issues to rest, but his discovery sends Ronnie into a tailspin. Ronnie already knows trusting men risks her heart and stability. Why would she want to meet the first man who rejected her?

An even bigger secret about Ronnie’s father convinces Ronnie to give him one chance to explain, never knowing it will bring her face to face with the true source of her trust issues.  Will the revelation come too late to restore the happiness she’d found with Marcus?

Marcus pulled Ronnie against his side, and she nestled under his arm like a kitten seeking warmth. His hand squeezed her waist while his chin tapped the top of her head.

“Thanks for coming.” Her voice was hushed, as if a normal tone might wake the babies.

“Stop thanking me. I wouldn’t have let you come alone.”

Movement beyond the second nursery caught her eye. A dark-haired man stood up, his face covered by a mask and body engulfed in a yellow paper gown: her brother. He spoke with a nurse before walking out of sight.

Ronnie scanned for an exit, shuffling toward the nurse’s station visible through the nursery’s glass wall. She drew slightly away from Marcus, preparing to be strong for Tony.

Her brother was discarding the paper robe and mask when she rounded the corner. He swiveled toward her with military precision and wrapped her in his arms.

“How is Jen?” Ronnie pulled away slightly and watched his face for tells. Dark circles smudged his eyes and wrinkles drew his mouth into a firm line.

“Stable. She lost a lot of blood, but they saved her uterus.”

Ronnie had been reading about placenta previa and the related side effects during the flight. About five percent of women needed a hysterectomy to staunch the blood flow associated with the misplaced placenta. As much as Tony wanted to father a son, it would have been heartbreaking for them if this was their only child.

“She’s plugged into a breathing machine and hooked to a dozen different monitors. Most of her vitals are good, but she didn’t breathe on her own at delivery.”

A girl. This tiny one didn’t know how lucky she was to have a loving, protective father watching over her. A tug in her chest distracted. Was she wishing for a father? The one who sired her had walked away, and the replacement her mother chose had done unspeakable things.

She shook her head, tucking a strand straying from her upswept hair behind her ear. That was old news. This was the future.

Ronnie squeezed her brother’s fingers. “What can I do for you?”

“Are you ready to sleep?” Ronnie peered into the tired lines of his drawn face. The adrenaline she imagined fueling him all day had run out, but behind the hazel eyes like hers, she saw anxiety, and she’d been reading those eyes for three decades. “How about a walk?” Ronnie wasn’t sure if it would help him, but anything had to be better than sitting in a hospital room.

Marcus squeezed her waist. Ronnie glanced up at him, breath catching at the tender look in his cobalt eyes.

“I’ll book a nearby hotel.” It was the one thing he hadn’t done in advance since they might have stayed at the hospital with her brother. Marcus wouldn’t expect to share a room with her and understood she wanted to pay her own way.

Ronnie rose on her toes and nearly touched his ear with her lips. His indrawn breath made her heart vault against her chest.

His eyes widened. She pressed her lips to his in a perfunctory kiss then turned to thread her arm through Tony’s.

“There’s a waiting room down that hall.” Tony gestured to the opposite side of the nurse’s station.

As he navigated the maze of halls to another bank of elevators, Ronnie fell into step with her brother. On the ground floor, he led her into a walled-in garden. Their shoes thumped against the paved path around the edge. Minutes passed in silence, and she drew a deep breath of temperate air, so different than the chill moist air near her apartment.

“Greg and Angie will be down tomorrow.”

“When’s Mom going to be here?”

“Dennis wanted to drive over and stay through the holidays.”

The holidays? It was nearly three weeks until Christmas. Ronnie shook her head and drew a breath to comment.

Tony continued. “She doesn’t want to fly in case she has an episode. It embarrasses her to lose control of her limbs.” He sighed. “While Dennis relayed their plans, she never stopped blathering about this being the only grandchild she’ll ever meet.”

Ronnie hugged his arm. The firm bicep bulged beneath her fingers, reminding her of Marcus’s very un-engineer-like arms. She pushed thoughts of him away. He was a distraction, and she needed to focus on her family. Hadn’t she told him as much on Sunday?

If she could shake her mother right now, Ronnie would do it. Couldn’t she see that Tony needed encouragement? Obviously, this terminal illness was going to exacerbate her mother’s self-centered tendencies.

“How can I help?” Please don’t say handle, Mom. But, she would do it if that’s what he needed.

Tony stopped walking and faced her. A desolate look stared back at her. “I don’t know how to be a good father. How could I? I never had one.”

Ronnie’s stomach nosedived into her feet. The truth was too much of a burden for her brother, which is why she had kept her secret for so long.

“Stop.” Her voice broke. She stiffened her spine and squinted at him. “You are three times the man of anyone who ever claimed to be your father.”

His ragged breaths did nothing to cool Ronnie’s flaming cheeks. If she could go back, she wouldn’t tell him anything.

Check out the other books in the series

Since adventuring in Narnia as a trouble youth, Sharon Hughson has embraced the magical portal of reading. As a child, she wrote her first story and discovered a passion for creating new worlds. These days, with help from three cats, Sharon pens romance, young adult fantasy, women’s fiction, and nonfiction (too many story ideas for a single genre).

When summer turns to autumn, she picks up her substitute teacher satchel and ventures into the real world for new inspiration. She and her high school sweetheart (and husband) live near the Columbia River in Oregon, not too far from their adult sons. When she isn’t writing or reading, Sharon enjoys walking, hiking, crocheting, playing the piano and scrapbooking family memories.

Sharon has multiple short stories and three novellas published with Roane. She gladly credits them for launching her fiction writing career. For more information about any of her books visit her website.