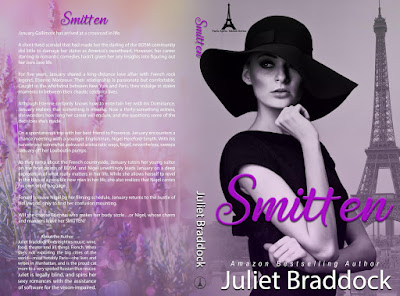 January Gallimore has arrived at a crossroad in life.

For five years, January shared a long-distance love affair with French rock legend, Etienne Marceaux. Their relationship is passionate but comfortable. Caught in the whirlwind between New York and Paris, they indulge in stolen moments in between their chaotic celebrity lives.

Although Etienne certainly knows how to entertain her with his Dominance, January realizes that something is missing. Now a thirty-something actress, she wonders how long her career will endure, and she questions some of the decisions she’s made.

On a spontaneous trip with her best friend to Provence, January encounters a chance meeting with a younger Englishman, Nigel Hereford-Smyth. With his naivete and somewhat awkward aristocratic ways, Nigel, nevertheless, sweeps January off her Louboutin pumps.

Forced to leave Nigel by her filming schedule, January returns to the hustle of Hollywood, only to find her confusion mounting.

Will she choose Etienne, who makes her body sizzle…or Nigel, whose charm and manners leave her Smitten? 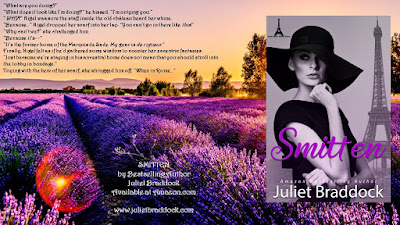 Amazon bestselling author Juliet Braddock’s first efforts in creative writing came long before she learned to put crayon to paper.  In fact, she began spinning stories in her head nearly as soon as she could form complete sentences.  As long as she can remember, she’d always created sagas about imaginary friends, family members and pop culture icons, and kept everyone around her entertained with her witty—but often very tall—tales.

Most of Juliet’s early attempts at writing romance focused on members of Duran Duran and Spandau Ballet or young leading men on Broadway.  However, as she matured as a writer, she decided that it was just as much fun to create her own romantic heroes and heroines.

At an early age, she also developed a love for big cities, and the tallest of skyscrapers were never high enough for her.  Juliet’s wanderlust would eventually lure her to New York, a city she often visited during her formative years, and her love affair with Manhattan began.  She’d promised herself that one day she would return for good.

Juliet’s passion for writing and for big cities converged, and after graduating with a degree in Journalism, she decided to set out on a journey to find her heart…just where she’d left it.

A week after her college graduation, Juliet made the big move from a small town to New York City, where she has made her home ever since.

In between building a career in communications and writing on the side, she’s indulged in international travel, theater and art.  A wine and food buff, she’s by no means a connoisseur, but she can give a few good restaurant recommendations if you’re in the city.

“There’s something so inspiring about living in a city like New York that’s so rich in culture and so very vibrant. Every neighborhood has its own story to tell,” Juliet says.  “I often do my best plotting on the subway, just observing the lives unfolding around me.  New York truly has a billion stories nestled between the skyscrapers.”

Since she initially started writing, Juliet developed a condition called Pseudotumor, and while she is legally blind, she continues to turn out her steamy, romantic stories with the help of magnifying software for the vision-impaired.

“Throughout my lifetime, I’ve been through a lot, but I never let anything stop me from doing what I love to do,” Juliet says. “Writing has been my passion since I was a child, and as long as I have stories to share with my readers, I will continue.”

A proud New Yorker, Juliet couldn’t live anywhere else—except for Paris, perhaps—and is a gushing cat-mom to a Russian Blue mix who was rescued as a kitten from the streets of Brooklyn, where they make their home.

Juliet is legally blind, and spins her sexy romances with the assistance of software for the vision-impaired. 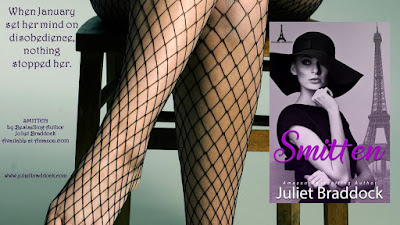