Albert Walsh the Third has spent over a decade running away from his past. With no job and nothing to lose, he goes on a spontaneous drive to visit his sister in the mountains of Colorado. The simple trip proves to be more than he bargained for.

Samantha Belmont is floating through life. She’s cast her dreams aside and now works on her papa’s ranch. One night, Sam is driving home in a snow storm after a hookup when she spots a car in a ditch and saves a man’s life. She doesn’t expect to develop feelings for the hot as hell stranger. Everything about him is wrong from his pointy shoes and fancy car to his age. Pushing him away would be the smart move.

Problem is Sam has secrets of her own. Secrets she doesn’t want Al to find out because if he did he’d run in the other direction. She pushes him away even though he melts her panties right off—literally. There is more than just her heart that needs protection. Al won’t give up fighting for the feisty cowgirl’s attention.

Tempers will flare and hearts will be broken.

And Sam’s plans to never settle down will be torched like the inferno of passion raging between them. 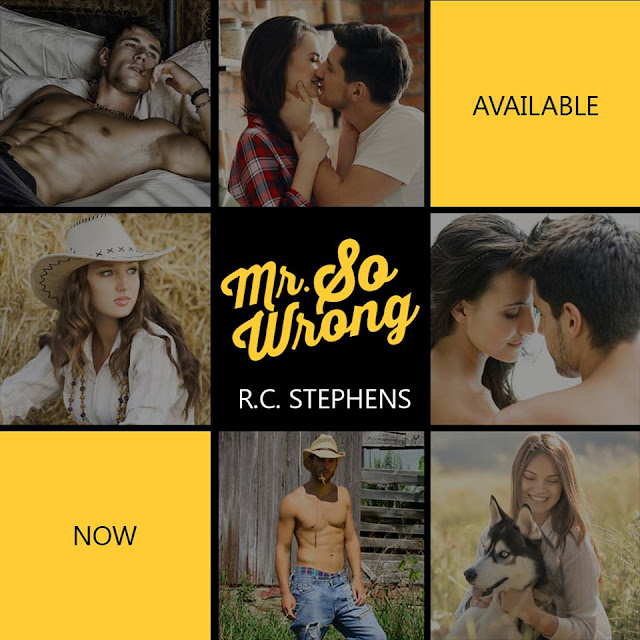 I’m getting my ingredients ready to fry up some eggs when there’s a loud rasp at the door. One of my best friends, Kelly, has her nose pressed to the glass window. Her nose looks bright red kind of like Rudolph. Snow blows in circles all around her. I rush to open the door. “Kell, what on earth are you doing out of your house in this weather?” I chide. Kelly married her high school sweetheart, Gage, straight out of high school and works at the local supermarket. They have an eighteen month old son, Theo. Kelly is my age. It seems everyone in this town marries young and has kids young. I’m the exception.

“I heard you found a strange man out on the highway last night and brought him home,” she says holding a pan of something in her hands. She places it on the kitchen table and rubs her hands together. “Heard he drives a nice car too.” She looks to me expectantly. It takes a lot of self-control not to roll my eyes at her and half the girls in this town, even though I love them all. Everyone is always looking for a way out of Holston; the population is minute, which means the economy sucks. If you’re not exporting out of state, you’re not surviving so well. Our ranch has always fared well, but with the lack of rain these last number of years, we’re struggling too. It’s hard enough to feed ourselves let alone a bunch of cows.

“He was passed out in his car, Kell.” I huff. “I couldn’t very well leave him out there to die.”

“Is he hot?” She looks at me wide eyed and a little too excited. My head moves from side to side as I ask myself if Al is hot. Hot would be an understatement. His body is rock solid and gorgeous, and he has the face of a model. Not a skinny fashion model either, but that rugged kind of model that cologne commercials like to use. Al was all man that was for sure.

“Fucking gorgeous.” My cheeks turn hot at the thought of him.

Kell claps her hands together, all excited. “I brought warm apple pie. I hope he likes apple pie,” she says as if apple pie is the solution to me having a hotter than hell man passed out in my bed.

“Let me remind you that you are a married woman.” I smirk, just playing with her. She and Gage are tight. She’s been trying to play matchmaker for me since at twenty-three I’m the equivalent to old maid around here. I return to beating my eggs in the bowl before plopping them into a fry pan.

“You don’t need to remind me. You know I got you in mind. What does he look like?” she waits expectantly.

“He looks like a movie star, thick muscles, gorgeous face, eyes that burn your skin when he looks at you,” I say, frying my eggs. When I turn to Kell, she looks flushed.

“Holy shit.” She waves a hand in front of her face.

“Hungry?” she repeats in a daze.

“Huh? Tell me more,” she insists, not answering my question.

“I think he has a massive cock,” I add, and she melts into the chair at the kitchen table.

“Why can’t that shit happen to me?” she says, waving a hand in her face like she’s fanning herself.

“How do you know he has a large cock?”

I walk toward her and whisper that I caught a glance at his morning erection when I was standing in the corner of the room.

“And you weren’t scared of him?” she asks.

I nod my head. “Trust me, if you see him, your first reaction won’t be fear.”

R.C. Stephens was born in Toronto, Canada. She graduated from York University with a Master’s Degree in Political Science.

R.C. is an avid reader, so when she isn’t cooking for her clan or on her laptop writing, she’s snuggled tight with her Kindle devouring any romance novel she can. Okay, with the exception of Thursday nights. She makes time for Scandal and Vampire Diaries. She’s a fan of drama and suspense but she’s also a sucker for a happy ending.

Her husband was her first teenage love. They live together with their three children in Toronto. Loving Canadian winters she could never think of living anywhere else.