Blog Tour ~ The Duke of Ruin, The Untouchables #8, by Darcy Burke 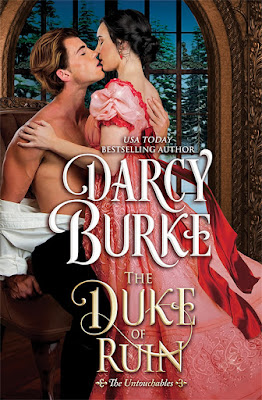 With her betrothal to a duke in tatters and scandal imminent, Diana Kingman has two choices: live in certain ignominy or flee into obscurity. Diana wants solitude. She never wished to wed in the first place. However, her father will stop at nothing to betroth her to one of the finest titles in the realm...no matter how loathsome the bearer. Escape is Diana’s only option, and she’ll pay any price to achieve freedom.

Universally blamed for the death of his wife and unborn child, Simon Hastings doesn’t dispute his guilt over an accident he cannot even remember. He hasn’t had a drink since, nor a moment’s peace. Determined to be a better man, Simon rescues a young woman in need—only to be accused of kidnapping. They must marry to save him from prison. But how can a man haunted by the love he lost and a woman afraid to get too close find happiness together? 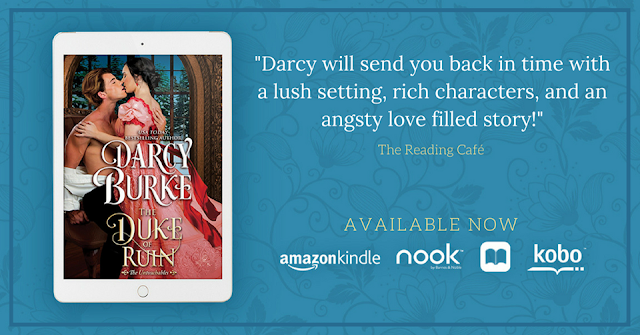 He turned from the fire and contemplated the bed. It was neither big nor small and would support a blanket between them. However, there was no dressing screen to allow for privacy.

He wasn’t entirely sure how to broach the sensitive topic of disrobing, but since they would be spending several nights together, it had to be done. He looked back at her over his shoulder. “You aren’t planning on sleeping in your clothes again, are you?”

She turned in front of the fire but didn’t come toward him. “I’d rather not. But I’m afraid I’m in need of assistance. Unfortunately, my wardrobe depends upon a maid.”

“I’d be happy to provide help. Just remember I’ve no experience as a ladies’ maid.”

“Did you never undress your wife?” She looked away, angling herself back toward the fire. “Forget I asked that.”

He went back toward her and spoke softly. “Don’t.” She turned her head, her blue eyes dark and vivid in the firelight. “We are going to get to know each other much better than we ought, and I don’t want you to regret things you might say. I assumed you would be curious about my wife. Yes, I undressed her. Many times. If I close my eyes, I can still feel her skin.” But he didn’t close his eyes. He couldn’t. She—Miss Diana Kingman—held him captive with her gaze.

Miss Kingman exhaled. “You must promise not to look. Aside from what you must do to unlace my gown.

“I promise.” He kept his voice and his gaze steady. “We must trust each other on this journey. Implicitly. That’s why I won’t shy away from your questions.”

She nodded, then presented her back. “Will you leave while I undress? I’ll need ten minutes or so. I’ll be in bed when you return and will close my eyes while you disrobe.”

It was a good plan, particularly since he thought a walk outside in the cold might do him some good. A beautiful woman’s back presented to him for the purpose of assistance with disrobing was too reminiscent of a time gone by and yet wholly new. Miss Kingman wasn’t Miriam, nor did he want her to be.

Simon quickly unlaced her gown and helped lift it over her head. He laid it across one of the chairs set at a small table and returned to help her remove her petticoat and unlace her corset. When he finished, he dropped his hands to his sides.

“I can finish,” she said, without looking back. “Thank you.”

He left without a word, closing the door firmly behind him. He inhaled sharply, taking perhaps the deepest breath he had in the last ten minutes.

Thankfully he didn’t encounter anyone on his walk. He wasn’t in the mood to made idle chatter. His thoughts were bad enough—railing at him for being attracted to someone who wasn’t his wife.

But how could he expect to go through life as he had the past two years? A self-hating, forlorn monk. Oh, he put on a good face for everyone else, but no one knew how acutely his pain cut.

Tomorrow, they would be on their way to Northampton, and hopefully, things would go as smoothly as they had so far. But first he had to spend the night in her bed. Again. Only with less clothing.

Thinking it had been well more than ten minutes, he made his way back upstairs. The lantern next to the bed had been extinguished, leaving just the light from the fire to illuminate the room.

Simon looked toward the bed. Miss Kingman lay near the edge of one side—as close as she could get without falling off, he noted—her back to the center of the bed, where it looked as though she’d rolled one of the blankets and placed it between them. He hoped there were enough coverings on the bed to keep them warm. Last night, they’d worn more clothing to bed.

Hell. He wore a nightshirt to sleep in or, most often, nothing at all. Tonight, he should probably keep his smallclothes on.

Shrugging out of his jacket, he hung it on a hook in the wall. He sat down to remove his boots, working as quietly and quickly as possible. When he’d removed everything but his shirt and smallclothes, he went to his side of the bed and crawled between the icy covers. He shuddered involuntarily and felt her jerk.

“Very,” she responded, her low, feminine voice rustling over him like a fine silk.

He considered making an offer to warm them both up—body heat would be most beneficial. But that was likely a bad idea. For so many reasons.

He turned to his side, away from her, but snuggled his back against the rolled-up blanket. That would help with the cold. And the warmer he got, the more easily he would fall asleep. And the sooner he fell asleep, the sooner he could put the proximity of Miss Kingman out of his mind.

Too bad none of that happened very quickly at all. 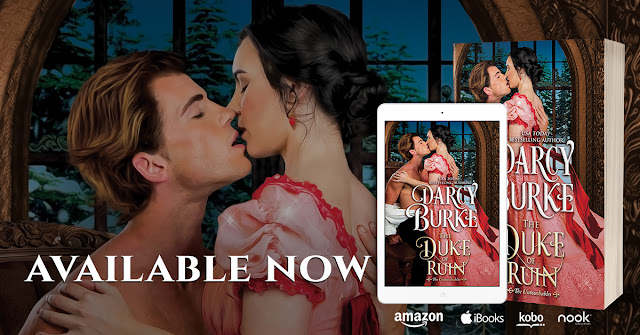 Buy The Duke of Ruin Today! 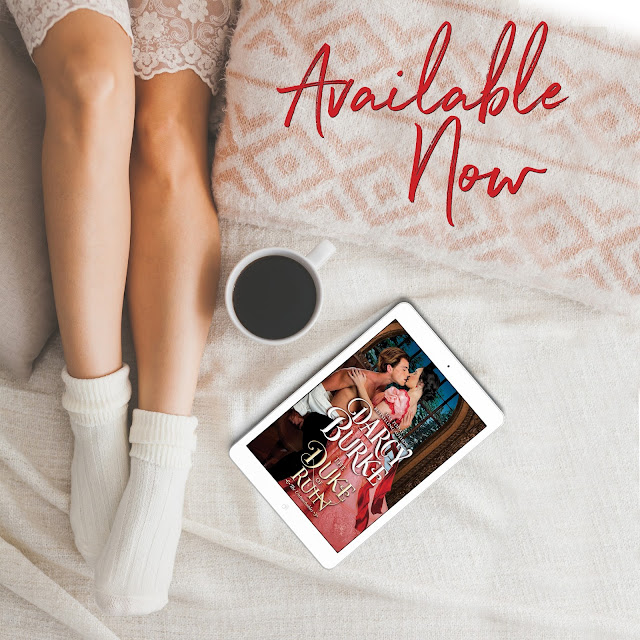 Darcy Burke is the USA Today Bestselling Author of sexy, emotional historical and contemporary romance. Darcy wrote her first book at age 11, a happily ever after about a swan addicted to magic and the female swan who loved him, with exceedingly poor illustrations.

Join her reader club at http://www.darcyburke.com/readerclub. A native Oregonian, Darcy lives on the edge of wine country with her guitar-strumming husband, their two hilarious kids who seem to have inherited the writing gene, two Bengal cats and a third cat named after a fruit.