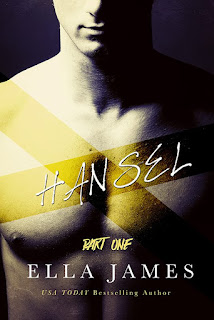 One boy. Mother calls him Hansel.
One girl. Mother named her Gretel.
Locked in little rooms, in the mountainside mansion of a crazy woman.
Until he saws a hole into the wall dividing them.
Then at least, they have each other’s hands.

It doesn’t end well at Mother’s house.
Everything gets…broken.

Ten years later, they meet again in an exclusive Vegas sex club.
Whips.
Chains.
And most of all, a mask.
What happens to love when it gets twisted? 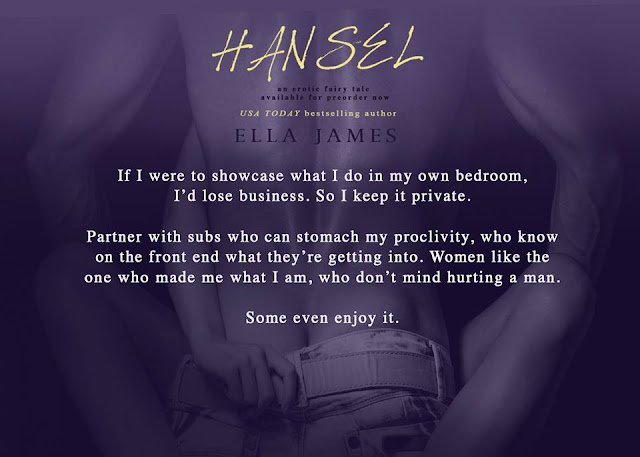 Hansel and Gretel spent several years together, having been kidnapped by Mother and help in the house with several other boys and girls. Their rooms were identical and shared a wall. Hansel, hearing Gretel cry, decides to cut a hole in the bottom of the wall so that he could hold her hand and comfort her.

One day, Mother comes to take Hansel away and he gone so much longer that his usual time. Gretel begins to worry. Where is he? What has happened to him? Will he return?

Then there is someone entering her room and at first she's scared, but she quickly learns it Hansel. But there is something wrong, something isn't as it should be. He's covered in something. It's blood and he tells her that Mother can't hurt them anymore.

Gretel attempts to clean him, he's a bit shell shock with his actions. She holds him and he holds her, but his desire for her requires more than holding. He takes her and becomes one with her. She's his.

But alas, the police arrive and tear them apart. And although Gretel attempts to looks for Hansel, but alas to no avail.

Ten years pass and a Leah (Gretel) is in Sin City with her sister. They are going to a club to see Edgar and his "show". Upon walking into the club, Leah quickly notices that the place is strangely familiar.

Why does it look this way? What is this place? How is this possible?


But the strangest part is when she see the stage. It's her room from Mother's house!

Leah has a bit of a panic attack but once she has gotten over it, she see Edgar and her heart stops!

It's him! It's Hansel. Edgar is Hansel!

Now that's found him, she has to get to him. See him. Talk to him. She is told of an audition that will be held for Edgar's new sub.

She decides to apply, although she missed the deadline. Luckily for her, she gets her foot in the door and he'll see her. The only problem is, she'll be in a mask. He won't know it's her!

The audition is in a word.... thrilling. Leah gives everything to Edgar and their chemistry is instant. He feels he knows her. She's scared to tell him the truth. But she pushes back and Edgar makes her leave. However, as she leaves, he catches something. Could she be the one he's longed for for so long? Can he get her back?

This was a very dark and seductive first book in this series. What happened all those year ago? How did they end up there? Why is Edgar the way he is now? So many questions.

These two characters have been through so much, but there is something they've been missing. Leah's PTSD left her broken but she's coping as best as possible. There is more to Edgar's story that made his into this dark persona.

Ella is giving us a dangerously seductive retelling of a fairy tale. I can't wait to see what twists and turns this story will tell. 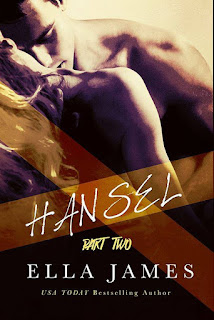 He was Hansel.
She was Gretel.
Once upon a time, they shared a prison wall inside a crazy woman's house.
When they meet again, he has a whip. She wears a mask. And fear runs high - for so many reasons.
What will happen when the mask comes off, the walls come down?


*This story is very dark, with many mature themes. If you don't like dark stories, you may not enjoy it.
*All four parts of Hansel are available now. 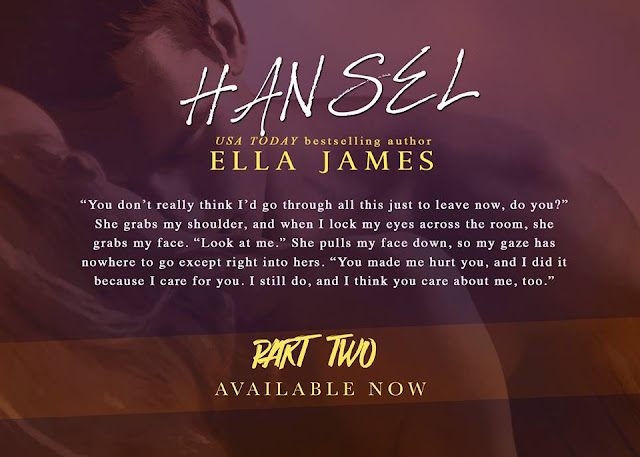 Leah knows that she should just leave, go home, start really living her life. But she can't. There is a connection with Lucas that she can't seem to break. She needs him like a fish needs water.

Yet another chance meetings brings these two together. It was defiantly not an ideal moment, but fate has a way of doing things it's way. But now that they've been brought together, what happens when the mask comes off and everything is out in the open. Will he still push her way or will she go running away freely? Or will they figure out a way to be together and work through their issues together?

This series is very captivating. Lucas is very dark and has underlying issues that he keeps buried. Leah wants him, but the man he is today is not the boy she once knew. On the same token, Leah is not the girl Lucas once knew. He wants her, but he's not sure that he is what she needs.

I love that Lucas is messed up but still cares enough for Leah to push her away. I love that Leah will stop at nothing to get what she wants, even if it means kicking and screaming. These two shared something all those years ago and that bond is not easily broken.

Getting to the bottom of Lucas' past is scary yet thrilling. Seeing his childhood and what lead him to Mother's house is very eerie. And Leah's memory about the day she was taken, so gut wrenching.

I'm loving this tale and can't wait to see what happens when they arrive at Mother's house! 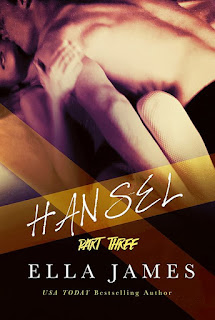 In part three of Hansel's story...


Limits are pushed, walls come down, and secrets are revealed. 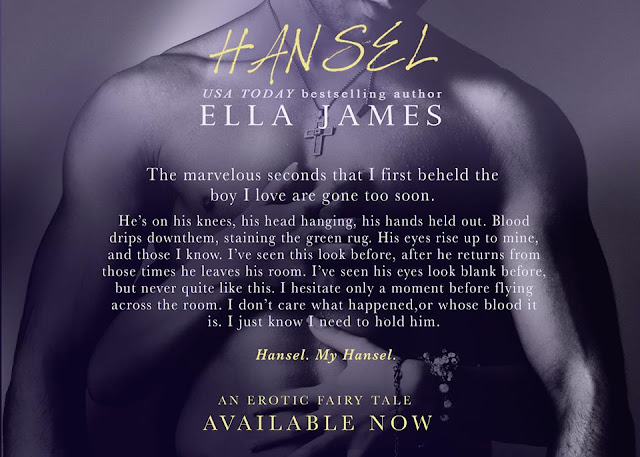 Review
They are on the road to Mother's house.

Lucas owns it now and Leah needs to see it.

Closure. She needs closure and she'll walk away.

Lucas wants to help but this could be too much for Leah. He wants to push her away, but he can't do it. He couldn't let her go then and can't let her go now.

We learn more about his past and touch on how these two come to cross paths. This installment was more for the backstory and what lead them here to this place once more. The pain that Lucas feels emotionally and physically are heart wrenching.

You want Lucas and Leah to have the happy ending, but at this point it's still up in the air.

Looking forward to the conclusion of this series! 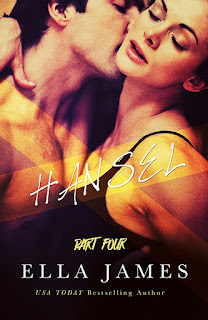 They were captives who shared a wall, and cut a hole in it so they could hold each other's hands. Until he killed their captor, Mother. Then he disappeared, and as the world swooped in to save the Children locked away in Mother's house, the girl called Gretel became...lost. No breadcrumbs.

Finding Hansel, years later, is the shock of Leah McKenzie's adult life. Finding out how far she'll go for him - that's no surprise.

Leah's given Hansel - Lucas, he says it is - every piece of herself. And he's been both cruel and kind.

What they share is dangerous.
What they feel is dark.
Their history is twisted.
Their hearts already broken.
And that's before the secrets are revealed.

They are at Mother's house and everything changes.

She panics, he wants to leave, she won't leave, he brings her to Mother's room.

They try to make a new memory, one that can erase the bad. The only problem is, Lucas freaks out. In a big way. Hurting himself... drastically.

But here's the thing, Lucas is kind of out of it but the things he is saying are adding up in Leah's mind. She's being to see what life was like for Lucas and how their paths intertwined.

Now that she is learning more and can see the real Lucas, can she stay with him and build a future?

Sweet Baby Jesus! This last part to the series is breath taking. Everything that has happened and brought them here is tremendous. The odds are against them, but their fighting spirit won't die.

I fell in love with these two, heart and soul. I followed their journey of self discovery and rejoiced in their never ending love. The path was hard and more than a few stumbling blocks along the way, but ending was worth it.

Ella James is full of surprises and I was not certain I would care for this series after Wolfe and Beast, but Hansel was worth the heartache. The story was dark but the ending was full of light!

Ella James is a USA Today bestselling author who writes teen and adult romance. She is happily married to a man who knows how to wield a red pen, and together they are raising a feisty two-year-old who will probably grow up believing everyone's parents go to war over the placement of a comma.

Ella's books have been listed on numerous Amazon bestseller lists, including the Movers & Shakers list and the Amazon Top 100; two were listed among Amazon's Top 100 Young Adult Ebooks of 2012.

To find out more about Ella's projects and get dates on upcoming releases, questions or comments? E-mail her at ella_f_james@ymail.com. 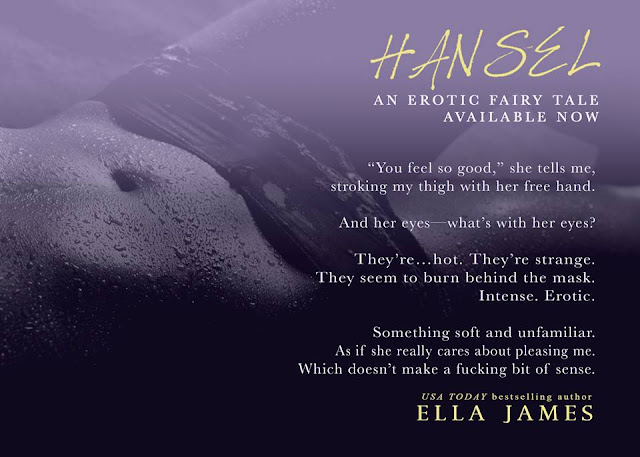