He grabbed her waist and slammed her close. Her breath caught. He nipped her earlobe.

“Admit it,” he growled. “Admit I am masterful at darts. Then, and only then, will I accept your rematch offer.”

She shook her head and made a move to reach for the dart in his hand. Like she was trying to subtly snatch it away. He clamped his palm around it and raised an eyebrow.

“You trying to pickpocket me?”

“If pickpocketing from your hand counts, then yes. I was.”

“You need a lesson in proper pickpocketing then, woman. You’re too obvious. Like you were in the alley earlier today.”

“You’re telling me you know how to pick pockets, too?” She narrowed her eyes, skepticism in her tone as she grabbed her iced tea from the nearby counter and took a drink.

She put down the glass, then parked her hands on her hips, hiking up her purse on her shoulder. “Teach me.”

“Can’t really teach you everything in one night, but it’s all about the art of deception,” he said as he led her back to the dartboard. Grabbing a dart from the green felt, he raised it and took aim at the bull’s-eye. Her gaze followed the dart. “That means you need to get the person to look elsewhere, like at the dartboard.”

She nodded and stared at the dartboard. For one second. Two seconds. Three. Then it dawned on her. When she snapped her focus back to him, he brandished her wallet.

“You got that from my purse,” she said, stomping a foot.

“I sure did. But that was the point. To show you how it’s done.”

He taught her a few basic distraction tricks, and she practiced on him, dipping her hands in his pockets and trying to pilfer his watch. She was no pro, and he was aware of her moves every time. But her technique improved with the brief lesson. However, the constant gliding of her hands into his pockets zapped his focus away from teaching and onto the next phase of tonight.

“That’s all for today’s lesson,” he said, since he had no more interest in being out with her. “Need to get you alone now.”

Her eyes told him she wanted that, too. “Let’s say good night to Marie.”

She’d been busy all evening pulling the tap and pouring drinks, so he drummed his fingertips against the bar, tipped an imaginary hat to her, and waved good-bye. But she beckoned them over. “Hey. You found your sexy fisherman,” Marie said to Steph, flicking her long braid off her shoulder so it hung down her back. She turned to Jake. “And you found my favorite mermaid.”

“We did find each other,” Steph said in a sweet voice that nailed him right in the heart. We found each other.Those words. They pulsed with double meaning.

The Sapphire Affair & The Sapphire Heist are being released by Montlake, which is an Amazon publishing company, and will only be available for sale at Amazon. You can download a free Kindle reading app for any smartphone or tablet.

Keep your lover close and your enemy closer…

After giving in to a fiery night of passion, island adventurer Steph Anderson and bounty hunter Jake Harlowe are back to square one. With millions in stolen jewels at stake, it’s hard for Steph not to question her new partner’s true motives—no matter how sexy he might be. Jake is hungry for more of Steph, but he can sense her growing mistrust, which only fuels his own doubts. Worse, there’s undeniable evidence that someone else is now after the jewels—and that they are both in real danger.

Fighting against their magnetic attraction is a distraction these two can’t afford. In order to survive, they’ll have to pull off one more heist—and trust each other with something even more precious than jewels: their hearts. 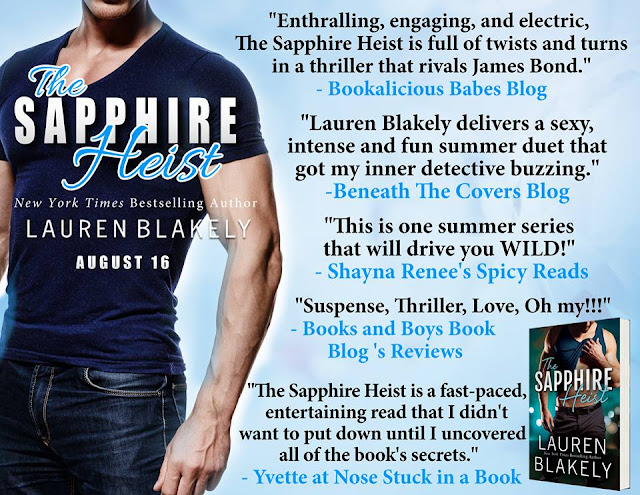 Lauren Blakely’s books always deliver and the Sapphire Heist is like a sparkling gem in the treasure chest of romance books. It has everything you could want in a book, love, romance, mystery, deception, and adventure.

Steph and Jake’s relationship started off hot and heavy, and the more time they spend together the deeper their feelings grow. They have had some ups and downs along the way, but they can’t seem to stay away from each other for long. Jake sure can make making up can be so much fun.

This story is a captivating escapade that will take you on a quest you never knew you wanted to take. The did he or didn’t he, will they or won’t they will keep you glue to every page. I would highly recommend this remarkable series to anyone looking for a little fun in the sun with a tall, dark and sexy recovery specialist. 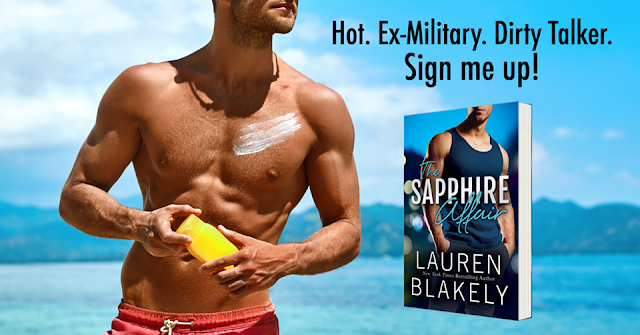 Since self-publishing her debut romance novel Caught Up In Us three years ago, Lauren Blakely has sold more than 1 million books. She is known for her sexy contemporary romance style that’s full of heat, heart and humor. A devout fan of cake and canines, Lauren has plotted entire novels while walking her four-legged friends. She lives in California with her family. With ten New York Times bestsellers, her titles have appeared on the New York Times, USA Today, and Wall Street Journal Bestseller Lists more than fifty times. Her bestselling series include Sinful Nights, Seductive Nights, No Regrets, Caught Up in Love, and Fighting Fire as well as standalone romantic comedies like Big Rock and Mister O, which were both instant New York Times Bestsellers. In the fall she’ll release Well Hung, another romantic comedy. To receive an email when Lauren releases a new book, sign up for her newsletter.