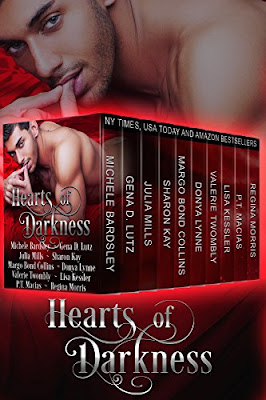 Ten delicious tales of paranormal romance just in time for Halloween. Get your calorie-free tricks or treats before this boxed set disappears. Those who dare the darkness will find the true heart of supernatural love.

Your Lycan Or Mine?
Michele Bardsley

Ash the Destroyer, the only soul shifter in existence, walked away from the Convocation and never looked back. Jarod Dante, the world’s last therianthrope, works for the new Convocation. When the Vedere psychics predict the end of mankind if Ash doesn’t defeat the demon queen Lilith, Jarod must convince the fearsome beauty to forget the past and save the future.

Anika Webb finds herself battling a volatile spell, where all bets are off, and magic will fly.

As part of the elite Watcher fighting force, Raul relishes taking down enemies and restoring peace to the realm. When summoned for a rescue op, he encounters a most unexpected woman among the captives. Imprisoned on a desolate mountaintop, Daphne has no hope of escape. Until surprise freedom comes in the form of a Watcher team…and the boy who’d left her home village years ago. Grown up and lethal, Raul is more handsome than Daphne remembered. Never-forgotten memories of their first kiss rekindle into searing passion. But is there room in her quiet life for a warrior who thrives on danger?

Under Her Skin
Margo Bond Collins

Lindi Parker works hard at being human, not an easy task for a snake shifter. She has no desire to search for other weresnakes—until she realizes she might be next on a killer's list. In order to save herself and the abused children she works with, must team up with Dr. Kade Nevala, a member of the shifter tribe responsible for eradicating weresnakes—and the most attractive man Lindi's ever met.

Rise Of The Fallen
Donya Lynne

Micah Black has lost his second mate and is on a fast track to destruction. When he seeks an end to his life by offering himself up to his enemies, the last thing he expects is exotic dancer and former Army medic Samantha Garrett thwarting his death wish and becoming his reason to live—and love—again. Now his enemies have Sam in their sights, and he’ll do anything to protect her, even if it means defying the king’s law.

A warrior angel is stripped of his wings, until he learns compassion for humanity. He fails, until he meets a beautiful woman hiding from life, and carrying a secret within her that only he recognizes. Together, they will be a pair capable of reckoning even with Lucifer himself.

Colin Flynn, the immortal Night Walker, is not the protector he had once been.
Juliana is a survivor, but her prophetic dreams warn her of coming death. As an ancient enemy emerges and threatens her safety, Colin will need to learn Juliana's secret to overcome his wounds, but falling for a mortal could be the greatest risk of all.

A spoiled, sexy and wild young wolf loves the chase. She loves to stir it up and watch the fireworks. She comes to a complete stop when she meets a vhampier that rocks her world. The mature Vhampier, the royal assassin, falls under her spell. He goes against the supernatural council, family, and royal decree. The unexpected threat to their lives bring them together, exposing their love.

Vampire Raymond Metcalf's life is spinning out of control. As if working with a team of vamps to protect the President isn’t enough, he must deal with his rebellious half-breed son, save the President from crazed vampires, and break in his team's new director.

Award winning and bestselling author Valerie Twombly grew up watching Dark Shadows over her mother’s shoulder, and from there her love of the fanged creatures blossomed. Today, Valerie has decided to take her darker, sensual side and put it to paper. When she is not busy creating a world full of steamy, hot men and strong, seductive women, she juggles her time between a full-time job, hubby and her two German shepherd dogs, in Northern IL. Valerie is a member of Romance Writers of America and Fantasy, Futuristic and Paranormal Romance Writers. She is also the founder of the Sexy Scribblers. A group of romance writers who get together and write free stories for their fans.

Sign up for Valerie’s Newsletter and be the first to hear about new releases, receive special excerpts and exclusive contests.