Beverley is giving away a $10 Amazon Gift Certificate to a randomly drawn winner via rafflecopter during the tour. Please use the RaffleCopter below to enter. Remember you may increase your chances of winning by visiting the other tour stops. You may find those locations here. 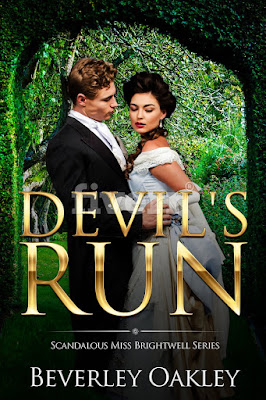 A rigged horse race - and a marriage offer riding on the outcome. When Miss Eliza Montrose unexpectedly becomes legal owner of the horse tipped to win the East Anglia Cup, her future is finally in her hands – but at what cost?


George Bramley, nephew to the Earl of Quamby, will wager anything. Even his future bride.


Miss Eliza Montrose will accept any wager to be reunited with the child she was forced to relinquish after an indiscretion — even if it means marrying a man she does not love.


But when the handsome and charming Rufus Patmore buys a horse from her betrothed, George Bramley, whose household her son visits from the foundling home, her heart is captured and the outcome of the wager is suddenly fraught with peril.


**This is book 3 in the Scandalous Miss Brightwell series, though it can be read as a stand-alone.


Amazon | All other retailers

This excerpt begins after Eliza has just plunged into the lake to rescue three drowning children and their nanny. Having dragged them – and herself – to shore, she makes a shocking discovery.


Eliza had forgotten what it felt like to enjoy a man’s attention. He’d started to dry her in a vigorous attempt to warm her but then his touch gentled and he simply stared down at her.

The wonder in his eye as he murmured words of praise was a rare sensation. Embarrassed, she turned away. Yes, turned away because she could not afford to be so obviously disquieted by another man when she was affianced to George Bramley who stood a few feet away from her. He was also staring but there was no softness in his countenance.

Hoping to avoid any more gestures of admiration or kindness from Mr Patmore, Eliza politely extricated herself and put out her hand to arrest the progress of the Foundling Home lad whom Nanny Brown was pursuing with a piece of dry linen.

His impish grin reminded her of young Miss Katherine’s, Lady Fenton’s daughter. Clearly the two had had a great adventure unlike Young George who was lying on his stomach upon the grass, shaking with sobs.

“Did you drink a lot of water, Young George?” Eliza asked, looking down at the crying boy but he ignored her. “I said we shouldn’t go out! I said!” He pounded his fists. “No one ever listens to what I say!”

Eliza shared a wry smile with the rather lovely Mr Patmore whom she found still staring at her but, as he looked about to approach her again, she turned her back on him and instead brought the Foundling Home boy to stand in front of her now that she’d succeeded in catching him. Eliza would not have Mr Bramley – or anyone else – accuse her of encouraging the attentions of a man not her betrothed.

“Jack – that’s your name, isn’t it? Well, you’ll have something to tell them back at the Foundling Home.” She’d seen him only from a distance and now, mud bespattered and with his hair matted over his forehead it was difficult to make out his features though she knew from various anecdotes that young Jack distinguished himself for keeping Miss Katherine’s wilfulness in check and peace between Katherine and her cousin, Young George.

Jack stood obediently before her as he started to wring out his threadbare shirt. “Nah, I’m fine, m’lady,” he said, glancing up to reveal a pair of small white teeth in a freckled face. “But thanks for savin’ me, an’ all.”

Eliza was about to let him go. Releasing her grip a second later might have changed the course of her life, she thought later that evening, and perhaps it would have been better if she had. Why repeat the trauma she’d already experienced?

But for now she was acting on instinct and instead of letting him go when it would have seemed natural, her grip on his wrist tightened while the air in her lungs disappeared, and she had to open and close her eyes three times before she was ready to believe what she saw.

“Gideon?” There seemed still no air to say his name. A great pressure was building in her head. Finally she was able to gasp in a breath, forcing herself to resist the urge to draw him into her embrace and wail her joy.

How many other boys of seven years sported a tiny extra claw on their left hand? Or had been thrust into the cold, unloving world of the Foundling Home, she thought bitterly.

He stopped what he was doing to look at her uncomprehendingly and she added faintly, “Though that’s not what they call you, of course.”

An amused look crossed his face, making him look older and wiser than his seven years. Nearby, the weeping and wailing George was a puling infant. Smiling at her was a little man.

He pushed out his chest and said in a tone that was neither boastful nor self pitying, “There’s some ‘at call me Devil’s Cub, or bastard, but at the manor here they call me Jack.”

Devil’s Cub? The sixth finger accounted for the nickname, of course.

“Miss Montrose?” In the distance, Lady Fenton was calling her. Eliza was suddenly shaking like one suffering the ague. “Jack,” she repeated in a whisper, still staring at him as she clenched her own fists. Was the child tormented by his deformity? It looked as if not much troubled him though Eliza couldn’t remember how many times Eliza had been told the sixth finger was God’s punishment upon her bastard babe.

“Miss Montrose! Come away! Susan is waiting in the house with a warm bath and blankets. You must be chilled to the bone!”

Vaguely, she could hear the sounds of concern all around her but all Eliza could focus on was the impish face before her: that of her lost child.

Beverley Oakley was seventeen when she bundled up her first her 500+ page romance and sent it to a publisher. Unfortunately drowning her heroine on the last page was apparently not in line with the expectations of romance readers so Beverley became a journalist.

Twenty-six years later Beverley was delighted to receive her first publishing contract from Robert Hale (UK) for a romance in which she ensured her heroine was saved from drowning in the icy North Sea.

Since 2009 Beverley has written more than thirteen historical romances, mostly set in England during the early nineteenth century. Mystery, intrigue and adventure spill from their pages and if she can pull off a thrilling race to save someone’s honour – or a worthy damsel from the noose – it’s time to celebrate with a good single malt Scotch.