She might be the one fire he can’t put out…


Caitlin Tyler doesn’t do bridges—she just doesn’t know it until she lands her dream job and freezes halfway across her new town’s towering death span. Cue the cocky, infuriating fireman who goads her off the bridge. He’s hot, but he’s also exactly the kind of guy she wants to avoid…which she manages to do for a whole four hours.

Lt. Shane Hendricks is only two weeks away from leaving Dry Rock. He sure as hell doesn’t need to get involved with a woman he has to rescue twice in one day. The fact that she’s clearly annoyed by him doesn’t deter him from throwing down a challenge—one that proves hard to resist for all the wrong reasons.

They’re moving in different directions. Leaving should be easy, but falling for Caitlin might be the one fire he can’t put out…

On her porch, Caitlin fumbled with the key but managed to get the door unlocked. “Thanks for the ride,” she said. “It didn’t suck.”

“Good,” Shane said. “Because I don’t think it sucked, either.”

His agreement caught her off guard, and she looked at him in surprise. She’d known how close he stood, so she shouldn’t have been startled to find his face inches away. He’d done that in the parking lot, completely out of nowhere, his lips grazing her ear. It still burned from his touch, and if that crackling of lust didn’t calm itself, she’d willingly become the next Van Gogh in her effort to escape it. Tangling anything of hers with anything of his was on her nope list, so for her gaze to once again drift to his mouth meant nothing.

Until his lips touched hers.

Honest-to-God sparks lit the sky. She went numb, all except the party happening on her lips. Every bit of her hard won resistance shattered, and the stark reality that her bed was the only thing she’d wholly unpacked went screaming through her head. It was the longest brushing-of-lips in the history of human copulation, and she’d have wallowed naked in it if she could.

Walking away would have been a much better idea, but she hadn’t exactly batted a thousand on those lately. The only thing she’d managed consistently since she arrived in Dry Rock was to stumble into one awkward moment after the next, each and every one witnessed by the fire lieutenant. And now here she stood, wanting him, and there was no way it wasn’t obvious. Seriously, what the hell?

It had just been a simple kiss.

They parted by millimeters, and she whimpered, the moment hanging heavily between them for a split, indecisive moment.

With a groan, he grabbed the back of her head and captured her, pulling her mouth to his, tasting and teasing, driving a spike of need through her that left her falling deeper, drowning in something that made paddling a class five rapid seem sane. She clung to him as he pulled her close, voicing a quiet verse of profanity that made her want to beg him to come inside.

Again and again he drove the kiss while she clutched uselessly at his shirt, drawing him deeper, burning for more. 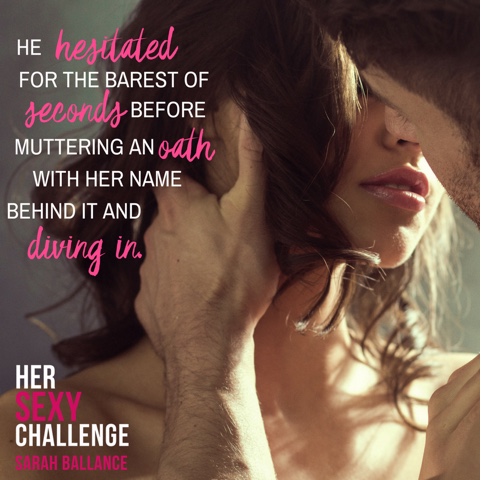 Sarah Ballance is a USA Today bestselling author of contemporary, historical, and supernatural romance and romantic suspense. She’s been married to her own romantic hero for what he calls a “long, long time” (and no, he’ll never hear the end of saying that). Together they have six children … and clearly too much time on their hands. She currently writes for Entangled Publishing.