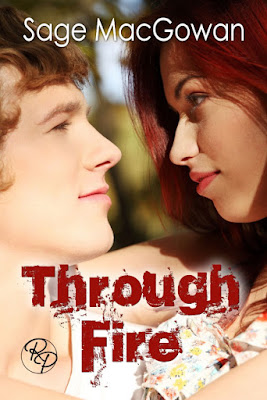 All her life Cass has been the wallflower, quietly content to make her mark from behind the scenes. As a cognitive psychologist in the research field she will use her intellect and tenacity to heal the “broken” brain. Because she learned long ago she isn’t capable of fixing broken minds, maybe not even broken hearts.

Bryan doesn’t even want to think about his present. To escape his past, he had always looked to the future. As a materials engineer he will use his ingenuity and talent to develop state-of-the-art products. But now an accident has drastically broad-sided his life…and the hits keep coming.

Force of will. Daring. Absolution.

They give each other the motive to step beyond self-consciousness, to reach outside themselves to touch the other. They discover the courage to pull one another close. To love. To be loved. From one another they draw the power and fortitude to move beyond mistakes.


Growing up, and for quite some time after, Sage was a reader and a dreamer, but didn’t often put pen to paper. After becoming addicted to romance novels, she would often rewrite the stories in her head. Then late one night, while listening to music, with story ideas dancing in her mind, she was overcome with an undeniable urge to actually write.

Sage is a nature-worshiper and spends a fair amount of time hiking and camping (real camping, not the wussy RV kind) with her family. She also rides horses as often as she can (which isn’t often) and gets her horse fix by volunteering at the local therapeutic riding center. Her other volunteer gig is a non-profit group that helps military veterans train dogs as support animals and service dogs. In her previous life (former career) she was a veterinary nurse for over 20 years, and has always had a passion for medicine, which is behind the presence of “medicalese” in her stories.