Book Blitz ~ His To Ride by Ava Sinclair 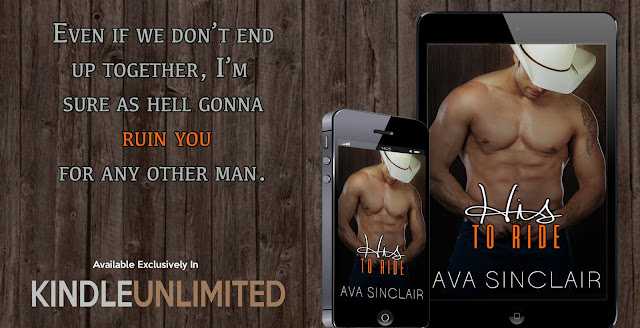 His to Ride
Author: Ava Sinclair 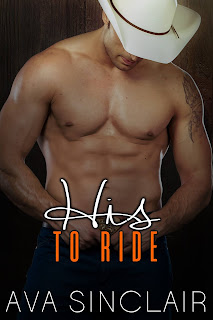 He's arrogant, rich, and now that he's turned pro as a bronc rider, the locals think he's a god. He's built like one, too, and the one night stand we had was hot as hell. But I dumped him, because I've got a long list of reasons why I can't be with Cole.

Only he's not taking no for an answer.

He's back in town, and pestering me for a second chance. When he taunts me into playing Texas Hold Em, I expect to win. I"m lucky at cards, and Cole promises to leave me alone if I win. But if I lose, he gets another ride.

I didn't expect him to win. But he does, and now I know I'm screwed. Literally. Cole aims to break me in his way, and if he can't have me, he's going to ruin me for any other man.

What the hell have I done? 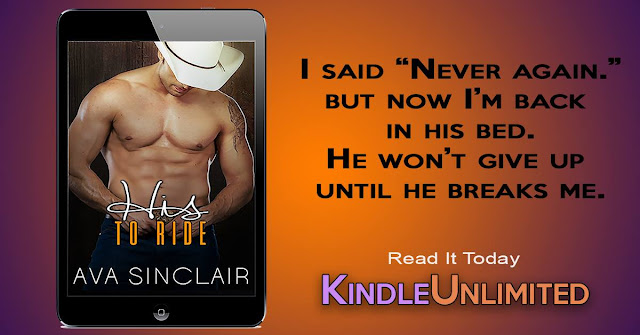 “Look, Cole,” I say with a sigh. “I know it hurt your male ego when I told you I wasn’t interested after our first time. But we don’t have to do this. If this is a matter of reputation, I’ll go back and tell everybody how good it was, how much I loved it. Hell, I’ll even tell them that you dumped me this time. That way we both get what we want.”

“You don’t know a thing about what I want.” Cole walks over from where he’s just put the chain in the door lock. He removes his cowboy hat, revealing a shock of unruly sandy hair that I know is softer than it looks. His eyes, light grey in his tanned face, are intense. “And this doesn’t have a goddamn thing to do with my reputation. This is about me. And you.”

“Based on what?” I take a step back. “Teenage flirtation? A one-night stand?”

“Yeah,” I reply. “And you had me, remember? And you found out that I was right all along when I said it wouldn’t work.” I swallow a lump forming in my throat. “Our first night here just proved it.”

“Bullshit. It confirmed that it can,” he said. “We were perfect together. You just got scared and bolted.”

“I’m not having this conversation,” I say, and move to push past him, but he catches my upper arm. “Let me go, Cole,” I hiss. “Another night together won’t prove a thing.”

“I know,” he says. “That’s why I’m raising the stakes of our little wager. Wanna go all or nothing?”

Another chance? My heart quickens. There’s no way Cole could get a lucky hand twice. I can’t suppress a smile at my good fortune.

“No. Not cards.” He steps forward and pulls me to him. Then, without asking, he starts to unbutton my shirt and I’m so shocked I don’t even stop him. His eyes are locked on mine as he continues. “That card game was for a ride,” he said. “And I’m getting one.”

The shirt is off now and he reaches back and unclasps my bra. My breasts tumble free and leads me to the bed, then spins me around so that the backs of my legs are to the mattress. He reaches for the button of my jeans. My hands go to his, but he’s not stopping. The jeans and panties are jerked down and he pushes me backwards. I fall back in shock, staring up at him as he leans down to pull off my left boot, then the right. My jeans follow and here I am, buck naked in the Silver Spur Hotel.

“How is that a wager?” I finally find my voice as he flips me over. Behind me I hear the jangle of his buckle as he undoes his belt. The blanket underneath me is scratchy against my hardening nipples, and I feel the stirrings of a persistent, soft throb of want in my disloyal pussy.

I glance back. He’s pulled his jeans and briefs down to mid-thigh. His cock, smooth and long and mapped with raised veins, is rock-hard and ram-rod straight. He grabs my hips and pulls me to all fours.

Variety is the spice of life and Ava Sinclair writes a little something for everyone, from dark romance to menage to kinky AF age play. But the one thing that is consistent in her books are strong storylines storylines, alpha males, and strong women whose hearts and bodies aren't given up without a fight.