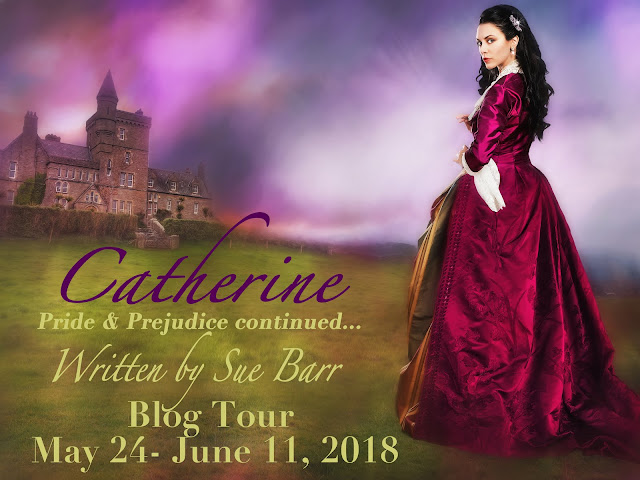 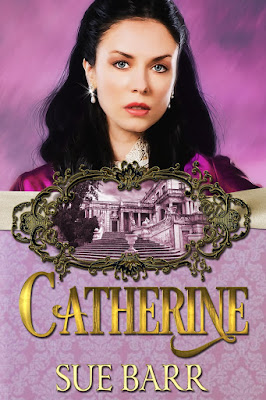 Some secrets are not meant to be shared.

Catherine Bennet, known as Kitty to close friends and family, knows this better than anyone. She also knows that she will never marry and it never bothered her before she met Lord George Kerr at Elizabeth and Darcy’s wedding. He’s determined to breach the walls of defense she’d carefully constructed around her heart, and she’s just as determined to stay the course.

Some secrets cannot be shared

Lord George Kerr knows this better than anyone. For five years, as a spy for His Majesty the King, he played the part of a Rake, concealing his espionage activities beneath a blanket of brothels, drink and loose women. Even though he’s forced to resume his regular life within London’s finest society, he still must keep some things hidden.

One thing he does not hide is his attraction to Miss Catherine Bennet of Longbourn. Enraptured by her beauty and warmth of character, he plunges headlong into winning her heart, only to find it carefully guarded and she’s unwilling to give him even a small pinch of hope.

Some things are beyond your control

When circumstances bring Kitty’s secret into the open, she fears the tenuous bonds of friendship she’s forged with Lord George will be lost forever along with whatever love he proclaims to have for her. With the very lives of England’s vast network of spies working undercover in Bonaparte’s France hanging in the balance, she’s forced to face her worst nightmare.

Her secret is laid bare, can he love her enough to overcome what he learns?

Catherine Bennet isn't the same silly girl she used to be now that three of her sisters have left and married. While she dreams of finding a love match as Lizzy and Jane, she's been keeping a secret that she feels will prevent that from ever happening.

Lord George Kerr has a reputation of being something he's not, but if that is what it takes to keep is true motives hidden than so be it. And the last thing he wishes to deal with are the mamas looking for an advantageous marriage for their daughters. He plans to marry for love and not for status.

Through a simple twist of fate these two are brought together. While their first introduction was short, the interaction was profound. Luckily for them, fate will step in and bring them back to together in a rather intriguing manner.

Their connection is strong and feelings grow the more they are in each other's company, but secrets have a way of coming out.

Lord George wants Catherine and Catherine wants Lord George, but once their secrets are laid bare, will this be the end of their possible courtship? Or will these secrets only bring them closer together?

Catherine is a rather riveting read that captivates the reader with intrigue, romance, and witty banter.

I love how Kitty is still the silly girl we love, but there is more to her now that she's been given the opportunity to grow in a mature young woman. I especially love how she made an effort to get to know Mary and strengthen their sisterly bond. And given her secret, she could have gone down the same path as Lydia but instead she bore it well and tried to live a life on her own terms.

Lord George is everything you want in a gentleman suitor. He's kind, caring, loyal, smart, witty, and cuts a fine figure on a horse. He also goes above and beyond for his family and his King and country. I especially love how attentive he is towards his Catherine. Even when she refuses him, he doesn't give up because he knows she's the one for him. And when he learns her secret, it doesn't change his feelings for her. I really loved him.

This was my first book from Sue and I look forward to what comes next and also going back and reading Caroline. Catherine has a thrilling storyline, a charming and beguiling hero, a strong and compassionate heroine, and a swoon worthy romance.

If you love Jane Austen and Pride and Prejudice, than you'll adore Catherine. So do yourself a favor and pick up this enchanting continuation today. 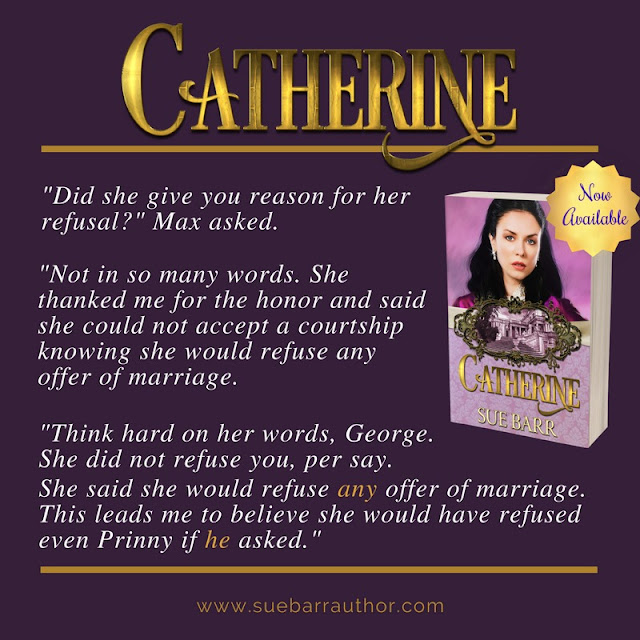 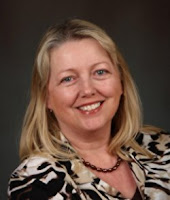 When Sue retired in 2015 from the London Police Service, she re-discovered #JAFF. Prior to that she’d read Pamela Aiden’s trilogy and, like all of us here, watched every movie ever made of Jane Austen’s books, as well as the spin-offs. Her favorite is Lost in Austen.

About that time, her childhood friend (Suzan Lauder) introduced her to A Happy Assembly. It wasn’t too long before the plot bunnies escaped and Sue began to wonder ‘whatever happened to Caroline Bingley after Charles and Mr. Darcy became engaged to the Bennet sisters?’ From that, Caroline was born, followed by Catherine which we are talking about today. In the works is Georgiana and who knows what else will follow…. 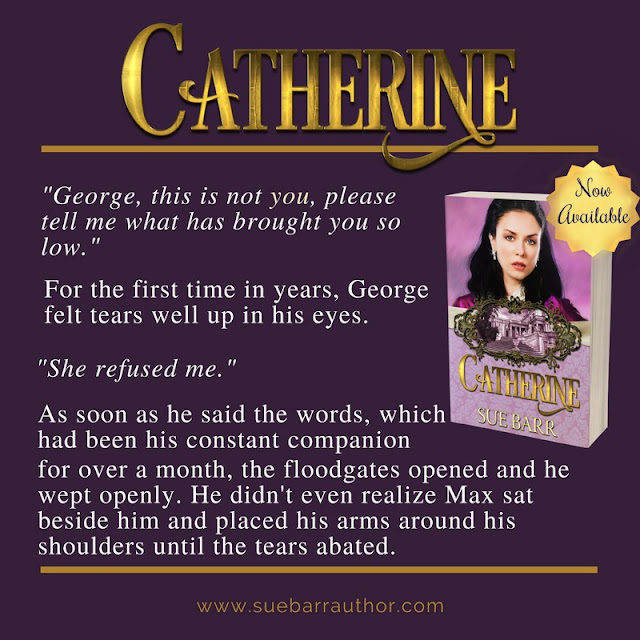 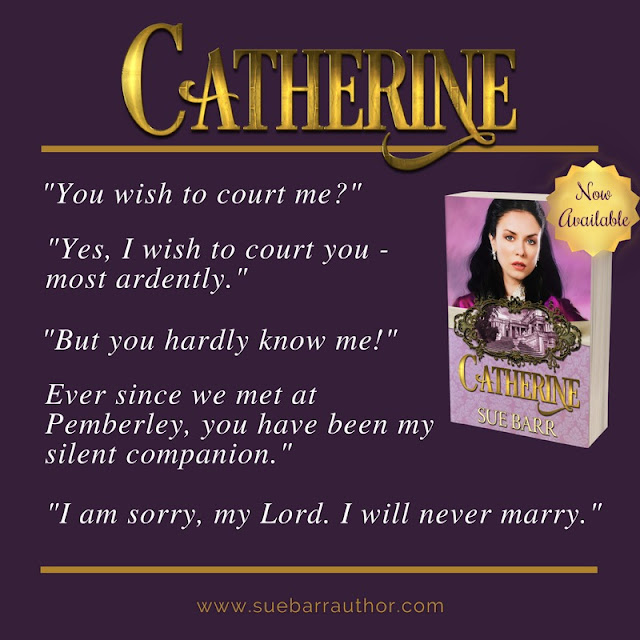