She was named most appropriately.

Cozen Taylor has more than earned her place as one of North America’s most successful thieves. Her name is whispered amongst criminal elite as the go-to thief when someone needs a heist.

She has never failed.

A call from the Miami-based Astor family could change all that with a job that seems almost impossible to complete. The mark should be simple—a stolen family heirloom, the man who has kept it hidden for over twenty years, and six months to return the piece to its rightful owners.

Nothing is ever that easy.

Three-hundred million for a successful heist. No smart thief would turn the offer down. Cozen didn’t expect a complication like him to put a kink in her plans, though. Sargon Makri—tall, dark, gorgeous, and entirely dangerous. For her life, her heart, and for the success of the heist.

The last thing Cozen needs to be thinking about is Sargon, and how she can get him into her bed … especially when he just happens to be her mark’s bodyguard. The thrill of the job has never been more addicting to Cozen, and she will risk everything to make the heist a success.

But at what cost?

From author Bethany-Kris comes a whole new world. A North American network full of criminals battling to stay on top, and painting the streets red in war as they dabble in the game of betrayal. Malicious, cunning, forbidden, and violent—welcome to The Empires and Badlands.


The old woman had not looked away from Cozen yet. Her gaze would probably be unsettling to some, but Cozen was accustomed to people trying to figure her out. Like she was some kind of prize to be unwrapped if they could manage to get through her many layers.

“Tell me, girl,” the woman said, her wrinkles being all the more prominent as her gaze narrowed on Cozen. “Do you genuinely believe you are the best thief on this continent?”

Cozen didn’t even think about it. “I think I am one of the best, ma’am.”

“I was taught by the best. It would be incredibly rude of me to be so arrogant as to say I am better than them because they taught me. Isn’t that how it should work?”

“Grandmamma, be nice,” Remington told the woman as he slipped the cat from her lap, and put it to the ground. But not before the ball of white hell hissed and tried to bite the man on his arm. “There is a reason Ace suggested he take this job to Cozen.”

“She’ll get it done for you, Pearl,” Ace agreed. “Cozen is golden. Never had a failed job, yet.”

This old woman was the one who called her for the job?

It really did take all kinds of people to make the fucking world go around.

Fourth’s gaze slipped in Cozen’s direction, and with the narrowing of his eyes, she felt his disbelief about her presence make itself known once more. Although this time, he chose to keep it silent and not open his mouth.

Pearl peered up at Cozen with a slow smile. It was as though she could read Cozen’s mind, or maybe it was just the woman’s age who gave her insight to the people around her. Who knew what it was?

It was still unsettling.

“How old do you think I am, girl?” Pearl asked.

Cozen pressed her lips together. It was not nice to guess a woman’s age, and certainly not a woman whose face looked like weathered, pale leather. “I would say you have lived long enough to know it wouldn’t be appropriate for me to answer that question, Mrs. Astor.”

Pearl smiled. “You would be right. I am ninety-five. I have outlived my husband, three of my children, and six dogs. I am on my fourth Persian cat at the moment—you saw her. I call her Sweetness.”

“She did not look very sweet.”

“You’re older than the Queen of England.”

Pearl nodded. “And richer than the bitch, too, darling.”

Cozen smiled widely, unable to stop herself. Laughter lit up the estate from the men. None of them seemed particularly surprised by Pearl’s quick wit.

She learned something in that moment.

“Shoo,” Pearl said to the gathered men. She flicked a jewel-covered hand. “Leave us alone for a while.”

Fourth and Ace were already pushing out of their chairs without needed to be told. Pearl and Remington the Third passed another look between one another before the man followed behind his son, and the broker he called in for this deal.

Or rather, the broker Pearl called in.

“Sit,” the old woman said, gesturing at the seat across from hers.

Cozen sat. “I hear you need a thief.” 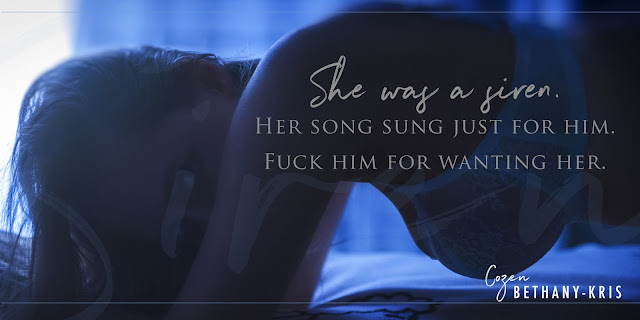 To keep up-to-date with new releases from Bethany-Kris, sign up to her New Release Newsletter.