Are you ready to go deep and feel the burn?

From USA Today bestselling author Kimberly Kincaid comes Down Deep, the next standalone title in the Station Seventeen series, releasing June 18th! Check out the excerpt below and grab you copy today! 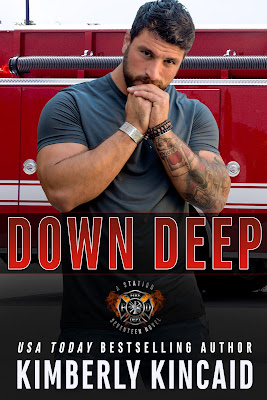 Ian Gamble has a past he’d rather forget—which is exactly what he’s doing at The Crooked Angel Bar and Grill when the place catches fire. Between his active duty in the Marines and his experience as a firefighter, his instincts get him and hot, headstrong bar manager, Kennedy Matthews, to safety. But those same instincts kick into high gear when the fire is ruled an arson, and he discovers Kennedy’s got secrets of her own.

The only thing that matters more to Kennedy than her bar is her brother. When she finds out he’s in over his head with a dangerous arsonist, she’ll do anything to keep him safe—even if it means teaming up with Gamble, who’s too sharp-eyed and hard-bodied for his own good. With every step, their attraction flares hotter and the risks grow more dangerous. Can Gamble and Kennedy face their fears—and their secrets—to catch a terrifying enemy? Or will they go down in flames?

Order a digital or print edition of Down Deep by Kimberly Kincaid and get an exclusive Epilogue from Kimberly! Each entry will also be entered for the chance to win a Grand Prize!

The Grand Prize for 1 winner consists of
~A 30-minute Google Hangout for the winner and one friend with Kimberly Kincaid and BT Urruela!

Fill Out The Form Here!

Kennedy paused. She wasn’t in the habit of being bossed around; hell, she wasn’t even really in the habit of accepting help, mostly because she never needed it. But her shoulders really did hurt like a sonofabitch, and anyway, letting him manage the sore spot on her back would only take a couple of seconds. How hard could it be?

She turned to face the shelving unit, pulling her hair over one shoulder. Gamble stepped in behind her, his hands finding the middle of her back a second later. His touch was surprisingly soft, so unlike his work-hardened body and dark stare and gruff demeanor, and Kennedy relaxed against the contact without meaning to.

“I usually do this with a tennis ball,” he said, his fingers traveling over either side of her spine as if he were trying to read her through the cotton of her shirt. “You just put it against a wall, press your back against it to keep it from falling, then roll it around a little to get it in the right place.”

“Sounds easy enough.” He slid his fingers higher, resting them just above her shoulder blades, and ah, her muscles squeezed in a burst of pleasure/pain.

“The trick is finding exactly the right spot and applying enough pressure to get everything to let go,” Gamble said. His hands kept moving, seeming to take stock of everything they touched, and with each pass of his fingers, Kennedy felt the tension in her body unwind. Her frazzled nerves, her fatigue, all of it fell away, and the pure goodness left in its wake made her mouth act independently from her brain.

“For the record, I do have a college degree.”

“Sorry?” His voice rumbled from behind her, and she turned her chin toward her shoulder to look at him—at least, as much as she could—as she answered.

“Before, you said”—his fingers found a spot, deep in her musculature, that made her pause for an exhale—“that you didn’t think they taught hammerlocks like that at Remington University. But I do have a degree. In business management.”

“Ah.” He rubbed slow circles over her shoulders, his hands wide and strong on her back until they zeroed in on a bundle of muscles at the juncture of her shoulder blade and spine. He applied just enough pressure to make the last of her tension release in a rush, and Kennedy swallowed the moan drifting up from her chest.

“Good to know,” Gamble said. He’d shifted toward her, just enough to return the half-look she’d sent over her shoulder, and enough for her to catch the scent of him on her inhale. He smelled clean—not like soap or laundry detergent, and definitely not like cologne, but of something sexy and intoxicating all the same, and, suddenly, the pantry seemed to have all the square footage of a postage stamp.

Kennedy’s heart slammed in her rib cage, her nipples going traitorously tight beneath her bra. This was impulsive at best, and insane at worst, but right now, she didn’t care.

Right now, she wanted him.

She lifted her chin to look up at Gamble through the shadows. At five foot ten, she didn’t usually feel small around people, but between the seven inches he had on her in height and the wide expanse of his well-muscled chest so close behind her, he came as close to eclipsing her as anyone ever had. His hands were still on her shoulders, and although it was the only place their bodies touched, she felt the heat of him everywhere.

“Kennedy.” The glint in his already-dangerous stare told her he wanted exactly what she did. Kennedy nodded, just the briefest signal of consent, and in less than a breath, he moved. Skimming his hands to the tops of her arms, Gamble cupped her shoulders to turn her around. His fingers pressed against her bare skin below the cap sleeves of her top, and her sex clenched with greedy want.

But then he froze, every part of him going still except for his heart, which she felt beating swiftly against her chest. “Do you smell that?”

She blinked, trying—and failing—to make sense of the question. “I…what?”

He took a step back, his entire body coiling as he sent a calculating gaze over the pantry, then the kitchen beyond. “Your cook turned off all the ovens and the flat-top grill before he left, right?”

“Of course.” Marco had never once skipped such an important step in breaking down his station. “Why?”

Gamble paused, but only long enough to grab her hand before he said, “Because your bar is on fire.”

And don’t miss the first books in the Station Seventeen series! Skin Deep is free for a limited time only, and Deep Check is just $.99!

Grab your copies of the Station Seventeen series today!

Kimberly Kincaid writes contemporary romance that splits the difference between sexy and sweet. When she’s not sitting cross-legged in an ancient desk chair known as “The Pleather Bomber”, she can be found practicing obscene amounts of yoga, whipping up anything from enchiladas to éclairs in her kitchen, or curled up with her nose in a book. Kimberly is a USA Today best-selling author and a 2015 RWA RITA® finalist who lives (and writes!) by the mantra that food is love. Kimberly resides in Virginia with her wildly patient husband and their three daughters.