Happy Book Birthday To Must Have Faith! 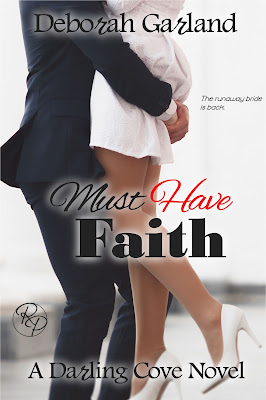 It’s easy to think the jilted groom is probably a jerk. But what if he’s not? What if he’s the good guy?

Faith Copeland has moved back home to the North Fork, where she has to live with stares and whispers behind her back. In Darling Cove, she’ll only ever be Greg Mallory’s runaway bride.

Darling Cove Police Officer, Gregory Mallory has been living with the scars and shame of being left at the altar. Since Faith took off, he’s not wanted to settle down, putting the Mallory name in jeopardy.

When his runaway bride returns, Greg’s tough façade begins to wear away.

Can Greg and Faith deny the attraction still burning inside them after so long? Will they survive this time around if it doesn’t work out? 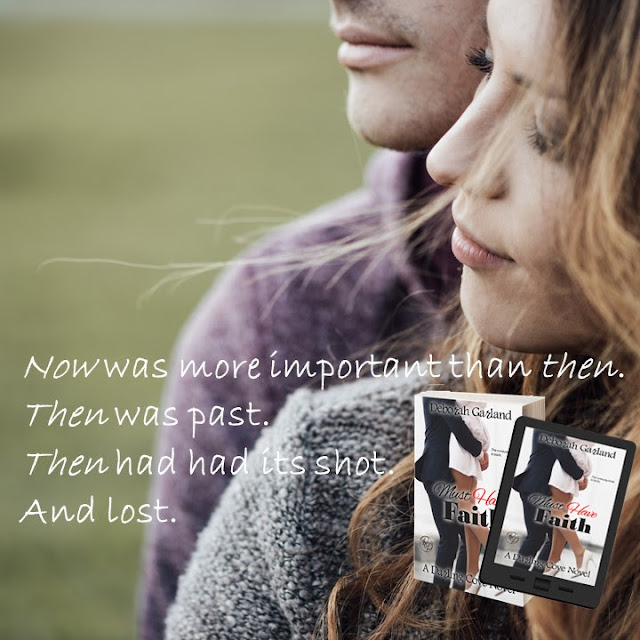 Greg mentally inventoried everything he felt against his skin. His bare skin. It’d taken several seconds to process that he was standing in his underwear. With Faith’s body pressed into his chest, his arms around her shoulders prevented her from falling. His Faith. Her fingers twisted around the camera to secure it, causing long fingernails to scrape against his stomach.

“I have it,” Faith whispered as the pressure of her body against his began to wane.

His fingers settled under her elbows holding her in place. The bottom of his chin brushed against the top of her head. All these years of imagining what he would say if they were in same room was lost to him at that moment.

Her head tipped back to meet his gaze. Months of distant glances all crashed down into a full-on eye locking stare. Smokey colored eye shadow swept across the beautiful blue eyes he’d gazed at for so many years. Pink lips she’d sunk her teeth into while watching him walk around his house as a young man had driven him to distraction. Her mouth…what he’d done with that mouth. Before…and after he took her virginity.

But one day, uncontrollable tears fell from those eyes. The astonishing words that had tumbled from her lips and mouth still burned in his memory after all these years: Greg, I can’t marry you.

He’d been too proud to beg and was brought up that a gentleman doesn’t raise his voice to a lady. There were so many restless nights he’d lie in bed speculating if Faith’s strange behavior a few weeks before the wedding shouldn’t have been dismissed as jitters.

The white-hot anger had melted away years ago, and even the mild taste of bitterness diminished. All he was left with was burning curiosity. He knew why she left. It was how she could leave that left him bewildered. An assignment in Iraq had come up. It’d been scheduled to leave two days before the wedding. She had sheepishly asked if they could postpone. Although he was quite annoyed, he’d been polite enough to hear her out. Until she dropped the bomb that it was a three-year assignment!

That topic however didn’t seem appropriate at the moment as he held her in that small office.

Greg was ready to speak, but Skye stood in the doorway with wide eyes and an open mouth.

“I’ll be out in a minute,” he repeated, but this time over Faith’s shoulder.

It forced her to spin around. “Oh my God.” She broke away to pull the camera strap over her head and took a giant step towards the door. “I just came in here for water.”

“A big tall glass of it I see.” Skye smirked with her arms crossed.

“What’s taking so long? Son of a—” Gwen rushed into the room as well.

It was enough to have a breakdown over! He was standing in tight boxer briefs in front of his two sisters and the woman he almost married. He dropped his hands to cover the nervous erection that liked to pop up at such inopportune times.

“My father’s getting too many calls, we have to get this moving.” Andrew came up behind Gwen and glanced at Greg. The panic he felt must have been all over his face. Andrew took immediate charge of the situation. “Ladies, let the man get dressed. Come on. Out. You too,” he said to his wife tapping her on the behind.

Andrew closed the door but stayed inside the room. He walked to the garment bag hanging on the coat rack. “I’ll give you a hand.” The man ran fashion shows and was used to seeing both men and women in all stages of undress.

Still, it was a little unnerving to have him there while Greg was battling his emotions. “I know how to put a suit on.”

“Prada suits can feel awkward at first. I wish you would have given me your exact measurements. I could have had it altered for you.”

“That’s not necessary. I doubt I’ll wear it again,” he said quickly, then inwardly choked, realizing that may have been an insult to the man’s livelihood.

While Greg had been quietly admiring Andrew’s sleek sophisticated look, he preferred jeans, flannel shirts and work boots. And a Glock tucked into his waistband. But he suspected Gwen didn’t want him packing heat in her engagement photos.

“Gwen filled me in on what happened with uh…that woman.” Andrew handed him a tan dress shirt, breaking the awkward silence. “I’m sorry. That must have been difficult.”

Greg had been ready to respond with a touch of sarcasm. Except Andrew had been widowed before he met Gwen. “Yeah. Well. Shit happens.” He tugged the dress pants to get them to fit over his thighs.

Andrew smirked touching his chin. “I have the same problem with Prada’s slacks.”

Greg turned toward the mirror. The fabric stretched tight across his butt. But the waist fit nicely, and the length was perfect. He buttoned up the shirt and stuffed it into the pants. His eyes rolled at the tie. “Purple?”

Andrew opened his arms. “Your sister made me wear a lavender shirt. You’re lucky you only have to wear the tie.” He smoothed his own, bright sapphire blue to match Gwen’s eyes.

A knock pounded on the door and it opened. “Seriously we have to… Oh my God!” Gwen squealed as her hands flew up to her face. “Greg! You look so handsome.”

Considering a former model was standing next to him, Greg took that as a huge compliment.

Faith Copeland knew coming home would be hard but knew it was the right thing to do for her family. What she never expected was the hope of a second chance at the love she walked away from so long ago.

Greg Mallory has spent the last ten years trying to get over Faith, but that proved to be harder said than done. Now that she's back, those old feelings surface stronger than ever.

Although years have passed, they come back together like it was just yesterday. Their connection grows even more intense and this time neither want to let their second chance get away.

In order to have a future Faith knows she must reveal the secret that she's been keeping. And when Greg learns why she really called off their wedding, will he be able to accept it as a mistake and embrace the future? Or will this be what finally breaks their connection and have Greg walking away this time?

Must Have Faith is a captivating, heartstring pulling read that you won't want to put down.

The love and passion that flows between Faith and Greg flies off the pages and straight into the reader's heart. Even though so many years have passed, the love they share has never waned. I adore how much they understand each other and are always there for the other in the good times and bad.

Faith is a strong, independent woman that isn't afraid to stand up for herself and speak her mind. In a man's world she a woman that doesn't let anything stand in her way.

Greg is everything you could want in a hero. He's strong, loyal, kind, and mouthwatering in a uniform as well as a suit. He's a man of his word. I love how he goes all in with Faith and vowing not to let her get away again. Even when he knows she plans to leave again, he doesn't let that stop him. How can you not swoon over him?

While they try to fight their pull to each other a love like theirs can't be denied for long. And when it does... hot damn does it hot! Each and every time was hotter than the last, but just like in everyday life sometimes you get caught. (And when they do... I laughed so hard!!)

I really enjoyed Must Have Faith with it sensational storyline, the sexy and charming hero, the beguiling and endearing heroine, and the off the charts romance.

I highly recommend you pick up Must Have Faith, a bottle of wine, and settle into your favorite reading spot today. 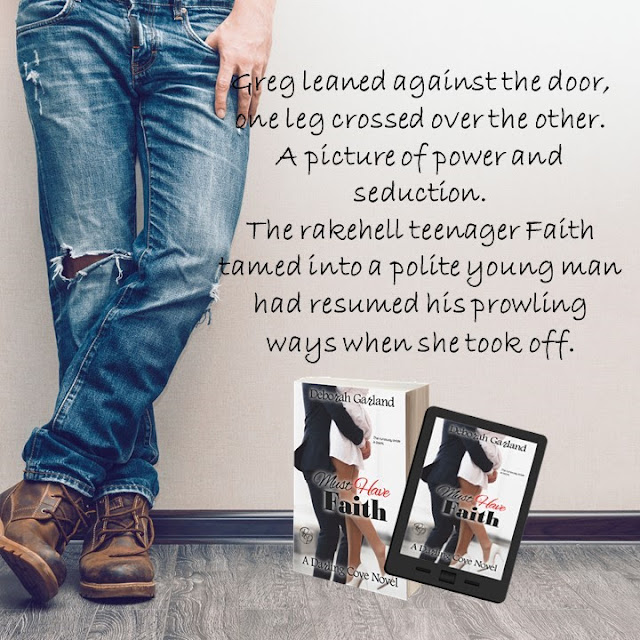 Deborah Garland is a former computer and sports journalist, turned romance and women’s fiction author. She likes to write about love and the struggles of complicated relationships. Her heroines are strong, and the heroes fall hard for them. She lives on the North Shore of Long Island with her husband and when she’s not writing, she’s either in the gym, or reading, cuddled up with their two pugs, Zoe and Harley.