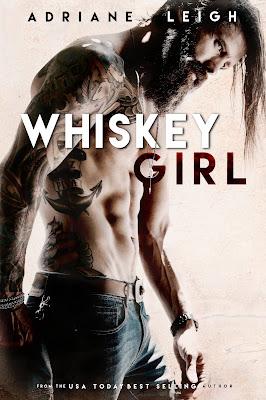 She was the one thing holding him together. Until she was gone.
And then there was whiskey.

Fallon Gentry has spent the last decade reliving one dark night in his head. The moment he lost the woman he loved when a single blink cascaded into a series of events that stole both of their lives. Now his nights are spent playing music in southern honky-tonks and nursing the memory of her the only way he knows how–at the bottom of a whiskey bottle.

A brief stint in Nashville, a hit song, and a brush with Hollywood couldn't bring him closer to God, but when the ghost of Augusta Belle Branson appears in his corner of another lonely dive bar late after dark, he's forced to confront everything he thought he knew about that fateful night, and a few things he didn't.

He’s her contradiction, she’s his salvation.

A firestorm of emotion consumes them when they come together after ten lost years, every moment more revealing, more unpredictable, more intoxicating than the next until the only reckoning left for Fallon is the one he must make with himself. But this time, fate may have left an after-burn too bitter to swallow. This time, he may lose his whiskey girl for good.

An unforgettable, epic love story about two lost souls who, against all odds, find themselves through their passion and music. Filled with raw emotion, this lyrical, all-the-feels masterpiece may catapult Adriane Leigh into the league of Colleen Hoover, Brittainy Cherry, and L.J. Shen. — Nelle L'Amour, New York Times Bestselling author of That Man 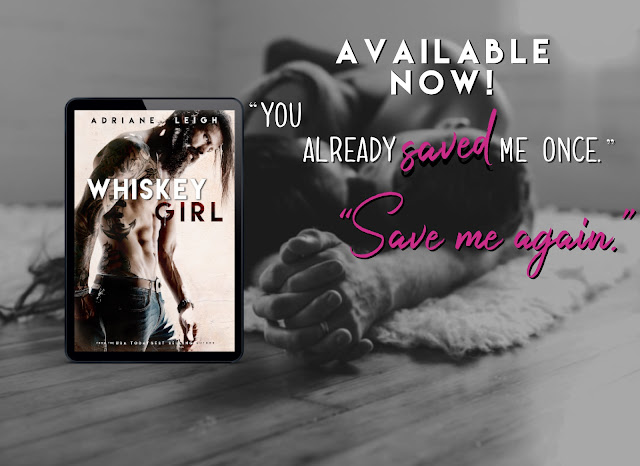 The first time I met Augusta Belle Branson, she was fixin’ on killin’ herself.

Said the minute I’d walked up, she was tryin’ to decide if jumpin’ off the bridge in the center—where the water was deep and the current stronger—would be a swifter end, or if she should jump near the edge, where jagged limestone slabs anchored the slow-moving current.

Certain death for sure.

I replayed the split second when the Indian summer sun burst through the orange oak leaves, a halo of warmth enveloping her.

Like an angel. Stardust sparkling straight from heaven, ploppin’ her in my path.

And then she turned, the most startling shade of liquid amber eyes breathing something real and alive, like fire, into my soul.

That same something I’d been runnin’ from—or chasin’, dependin’ on how you looked at it—just about every day since.

I settled myself on the lone wooden stool that awaited at center stage, my thoughts drawing back to the present. My head swam, but the old familiar chords floated on through the current of whiskey in my blood, and I strummed the first few notes of a song I wrote a lot of nights ago by an act of sheer muscle memory.

Old acoustic guitar resting on my knee, my first and third fingers in position on the strings, the opening chords of “Whiskey Girl” bled from my fingers.

Every chord, another dagger.

Every whispered lyric, my undoing.

I still didn’t know what the fuck had overtaken me the night I’d written this song in a fevered rush.

Well, the booze might have played a part, but I happened to think my best shit came out of uninhibited states.

I’d just had a fuckton of uninhibited states recently.

And the harder the liquor, the more she haunted me.

The crowd of a few hundred erupted into a standing ovation when I ended with the final, emotion-charged words.

The irony of this song was it was the one that’d launched my career. The first single to hit radio waves and then the top spot on the Billboard charts, and brought reporters, music executives, long-lost family members I wasn’t even really sure I was related to, and too much other scum with an end game that carried dollar signs to my front doorstep.

I’d moved to Nashville a rising star and left two years later, middle finger in the air as I tossed my once-promising music career out with last night’s liquor bottles in favor of the open road.

Not finding the one thing I needed.

Playing local honky-tonks for a fraction of the money I could have made.

But the truth was, the road was the only place I could find my happy.

A familiar ball of pain formed in my throat as I stood, pushing my guitar over one shoulder and bowing deeply. I couldn’t see a single face behind the glaring stage lights, but still, some part of me pretended she could be out there, that I was singing to her.

That she would hear her song and find her way back to me.

After hundreds of faceless crowds and too many bottles of Tennessee whiskey to bother counting, I still felt the pull inside me to travel to every town in America if that’s what it took to find her.

Hell, maybe she was happily married with a few kids, a dog, and a fucking minivan by now.

I nodded my head, giving one last wave to the crowd in the dark beyond, then left the stage, taking the steps two at a time and angling past the curtains to head for the tiny-ass dressing room this dive bar provided. Heading for another chug of amber gold before packing my shit into my truck and hitting the road.

I pushed a hand through my hair, thinking maybe a shower would be in order before I bailed, when a curvy little thing backed right up into me.

My palms landed on her shoulders, warm blond waves falling in a cascade over one side. The heady scent of peaches and honey filled my nostrils. My eyes slammed closed and brought me back to summer nights under a giant oak, fireflies melding together with the stars above like a painting.

“Sorry, I just dropped my phone.” The sweet-scented creature spun, brilliant smile falling from her face when our eyes made contact for the first time.

Every coldhearted memory slammed into my chest like a pallet of bricks.

I narrowed my eyes, gaze tracing the familiar yet unfamiliar angles of her porcelain face.

She was thinner now, cheeks sharp slashes of bone that highlighted her always-devastating round eyes and full lips. It was her, all right. I’d know this woman anywhere.

“Hi, Fallon.” I’d been dreamin’ of this moment for the better part of a decade, and still, my heart wasn’t prepared for those two words. My name on her lips left me with a toxic reaction.

My damnation and my salvation.

“I need a fucking minute.” I dropped my hands from her shoulders, her skin still haunting my fingertips, and walked straight down the narrow hallway, pushing the rusted back door open so hard the hinges protested.

“Fallon…” Hell, she’d followed me out.

And hell if wanted her to, but I didn’t not want her to either.

The emotions bombarding my mind were just a-fucking-bout unbearable.

“I said I need a fucking minute.” The sentence came out as more of a growl than I intended. Before she could reply, I stomped across the potholed parking lot, aiming for my heavy-duty Ford.

I yanked the door open, digging behind the driver’s seat for a fresh bottle of my favorite recipe.

I couldn’t be bothered to retrieve the half-full bottle I’d left in my dressing room. I had to get as far the fuck away from her just to clear my head and process what her being here even meant.

My hands circled the neck of the bottle, and I opened it in a flash, chugging back the first warm bite of pleasure I’d been craving.

I tossed the cap on my dash and fished the keys out of my pocket, about to climb into the cab and make hay, when fingertips painted a dark navy filtered into my vision and back out again, my goddamn truck keys hanging from one finger.

“Fuck,” I bit out, crawling out of the cab and swiping for the keys.

My reactions were a helluva lot slower than I thought they were. How much of that bottle had I drunk before the show? I shook the thought from my head, realizing this was probably about close to my average state of play on any given day. Runnin’ away from the life Augusta Belle and I’d had took something out of me. Something only whiskey could fill.

“I don’t care what your stupid ass does on your own time, but you’re not dying on mine, Fallon Gentry.”

My head pounded then. A whole fucking sentence out of her pretty pink lips, and my body’s old dependable reaction to her infuriating every cell of me.

I’d never been in control when it came to Augusta. Shouldn’t have been surprised it was no different now.

“As irritating as ever, I see,” I said, swiping for my keys one more time and missing before I stumbled off around her, whiskey bottle clutched in my hand and hell on my mind.

Augusta was back, and there wasn’t enough whiskey in the state of Tennessee to help me deal. 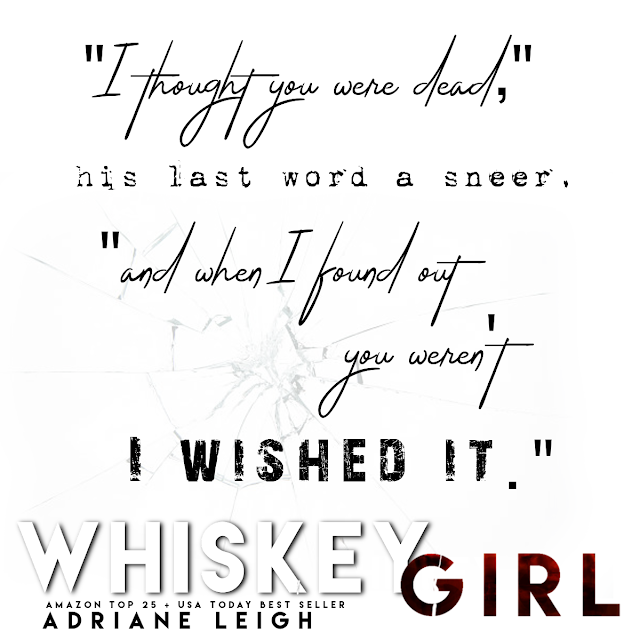 Married to her own Prince Charming, she now lives among the sand dunes of Lake Michigan, and plays mama to two sweet baby girls. She's a romantic rebel and word junkie that believes wanderlust is life, is part of the #goodvibetribe, and wishes she had more time to read and knit scarves to keep her cozy during the arctic Michigan winters. Yoga pants, puppies, and mac and cheese also help. Never miss a release! Get an alert at: http://www.adrianeleigh.com

“Sizzling chemistry, a glamorous world, plot twists…a perfect combination held together with Adriane Leigh’s addictive writing. I dove into this world, and didn’t want to come up for air. I can’t wait for more!” ~ Alessandra Torre, Hollywood Dirt

“Adriane Leigh never dissapoints with equal amounts of heat and heart with all the sex, suspense and scandal…Leigh’s newest mysterious hero will have you anxiously flipping pages well into the night trying to uncover his secrets.” ~ Jay Crownover, Marked Men 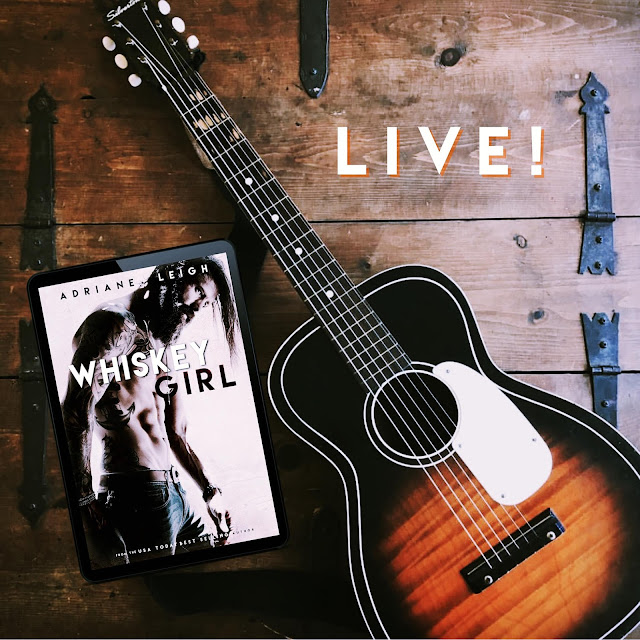