The only thing worse than the annual office Christmas party is attending the stinkin’ thing alone. Refusing to consign herself to that fate yet again, Marissa Wagner throws her normally sensible self aside and does what any newly adventurous—okay, desperate—woman in her shoes would do—she hires a male escort. But when he arrives for their pre-party introduction her situation goes from problem solved, to one holy whopper of a complication. Her paid-for dream man...is also her best friend’s brother.


Trig Campbell has been in the escorting biz long enough to realize there’s a risk of being set up with someone he knows. Never in a million years did he count on that person being Marissa. Out of all of Jane’s friends, Rissa’s always been the less wild of the bunch. Now that fate’s in his corner, he’s more than game to help her explore her bad girl side and play out every kinky fantasy they can. Getting past her doubts is no easy feat. Fortunately he knows a thing or two about cranking up the carnal heat, and soon he and Marissa embark on a week-long intensely erotic journey that leaves them both shaken and craving more.


As their time together draws closer to an end, Trig is haunted by a question he’d never expected to face. What possible future can a gigolo offer a woman like Marissa? And can he let her go when the time comes?


Warning: This book contains a player well-versed in the fine art of sin, a good girl who’s about to find out how delicious it is to be bad, enough kinky uses for a candy cane to make an elf blush, and verifiable proof that Santa does indeed come more than once a year.
Goodreads | Amazon 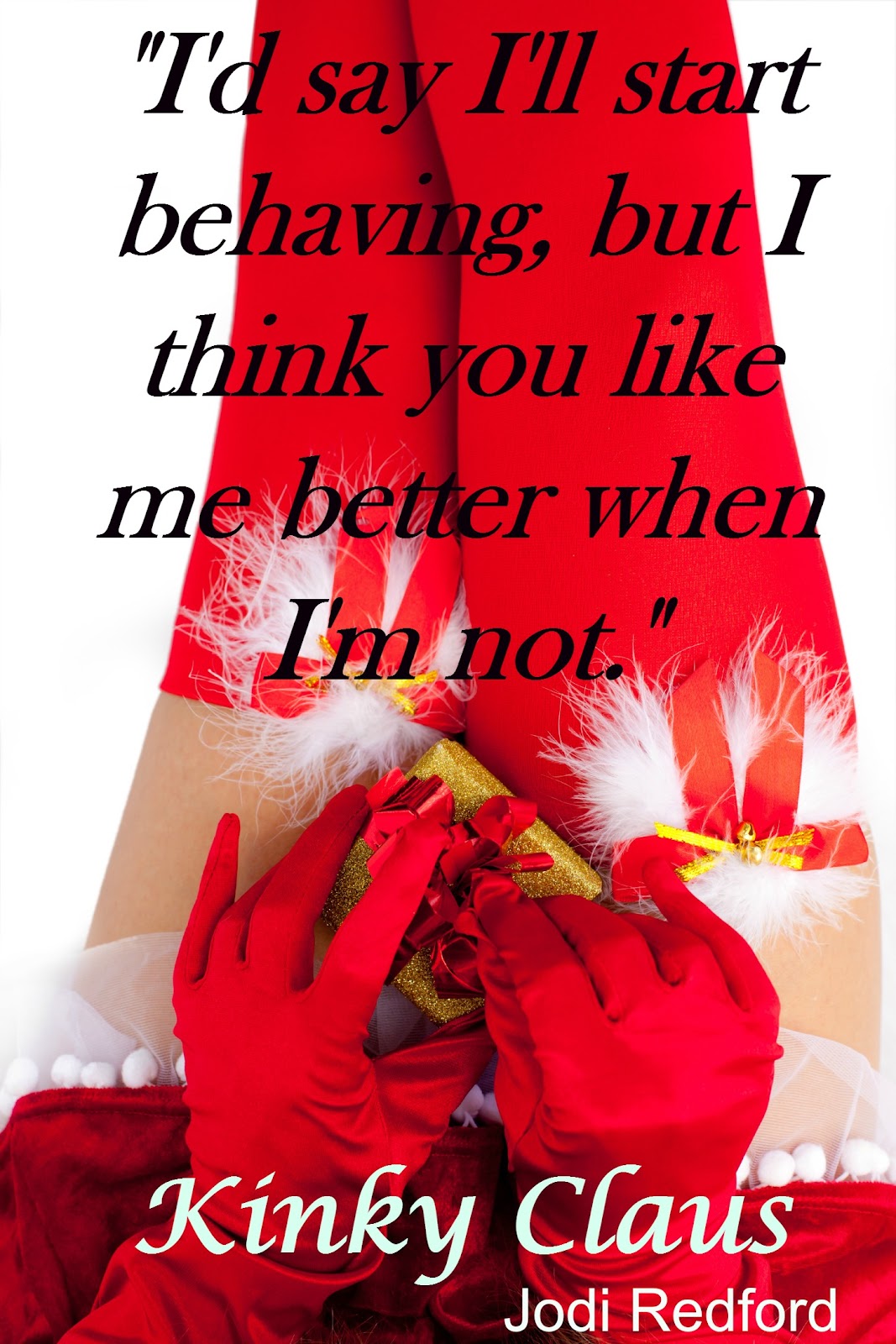 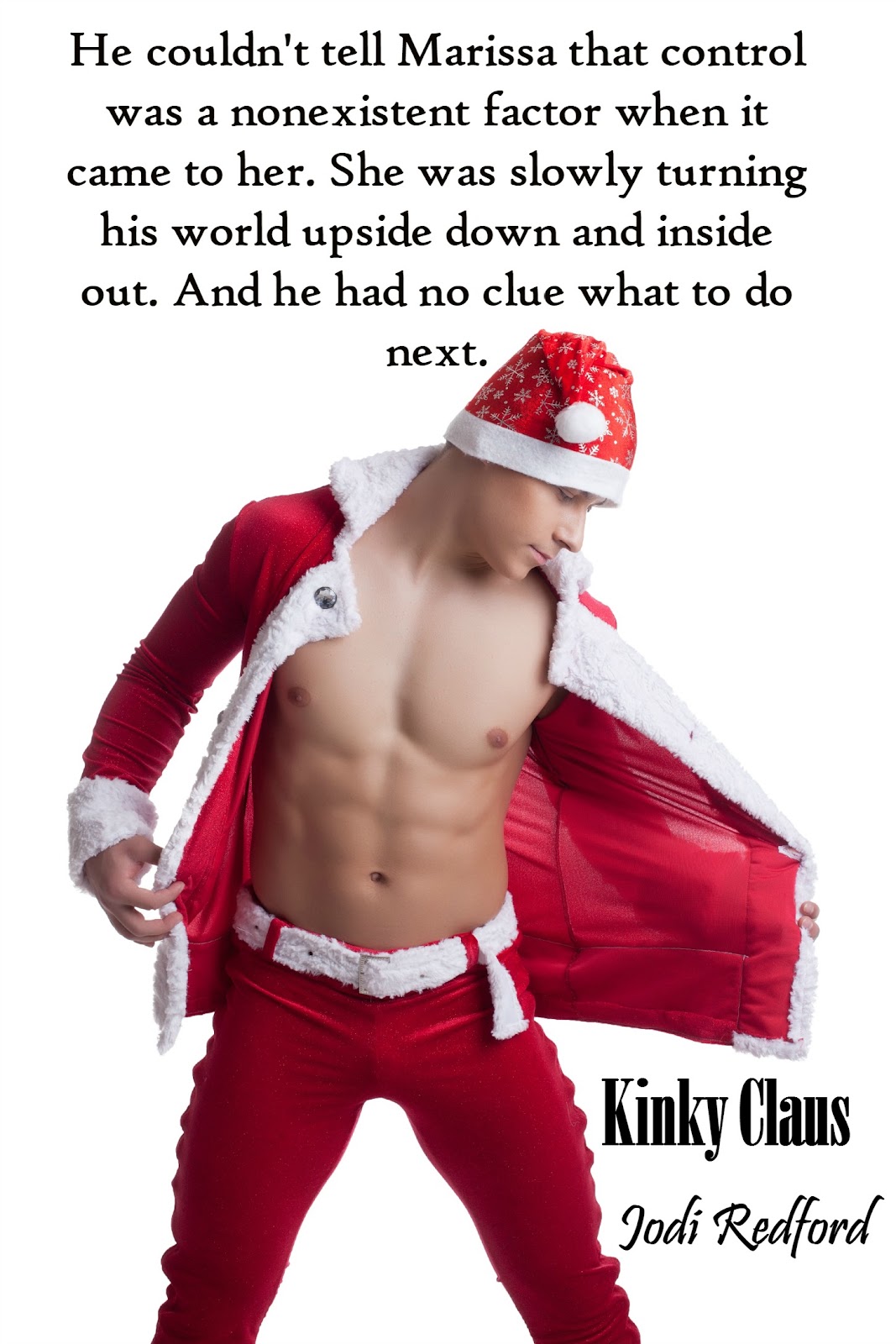 
Jane herded them to the escalator and they rode it to the second floor where they braved the cosmetic counter ladies and their arsenal of noxious perfume spritzes.

Doing her best to contain her coughs, Marissa ducked into the women’s evening wear section and bee-lined for the sales rack. She spotted a zebra-print number that resembled a bandage rather than something a sane woman should be seen wearing in public. Quickly hiding the ensemble behind an oversized sweater before Jane could pounce on it, Marissa continued appraising her choices. A respectably understated emerald green velvet sheath caught her eye and she freed it from its place of honor between a pair of leather skinny jeans and a powder blue cashmere cardigan.

Situating the dress against her front, she pivoted sideways. “What do you think of this?”

“Simple and sexy. I like it.”
She jerked her head up and gaped at Trig’s grinning mug. Before she could get her mouth to function she was interrupted by Jane’s perfectly timed appearance. Spearing her brother with a fierce look, Jane sidled next to Marissa. “What? Your bromance already on the rocks? Guess you shouldn’t have kept him waiting while consorting with us peons.”

“No, Jack texted me that he had an emergency pop up.” Trig propped his elbow on top of the clothes rack and flashed a smile that made Marissa squirm. “Looks like I’m all yours.”

“Lucky us.” Snorting, Jane turned her attention to the dress Marissa was clutching. She clucked her tongue. “Not enough cleavage. Or leg.”

Her expression pained, Jane glanced at Trig. “On second thought, you might come in useful. Clearly I need all the help I can convincing Polly the Prude here to wear something that wasn’t designed for Bingo Night at the convalescent home.”

“Occasion?” Trig inquired. Judging from the wicked twinkle in his irises he knew damn well what the dress was for.

“My office work party,” she gritted between her teeth.

“The game plan is to get her laid while she’s there.”
Marissa was torn between the desire to throttle Jane for that comment or crawl into the security of the nearest clothes rack to hide. That last option sounded like the wiser choice when Trig’s mouth tipped upward at one corner.

Marissa shook her head adamantly. “Don’t listen to her. She doesn’t know what she’s talking about.”
“Bullshit.” Jane flicked her wrist. “Everyone knows office parties are for faxing photo copies of your ass to your ex and/or freaky sex with that questionable guy from the mailroom. Preferably you’ll kill two birds with one stone by getting it on atop of said copier.”

“I really worry about you sometimes.” Marissa risked another peek in Trig’s direction. He was still eyeing her with blazing interest. Fairly certain he was mentally calculating the proper alignment required for Xeroxing her naked fanny, she hugged the dress tighter to her chest and inched toward the fitting rooms. “I’m going to, uh, try this on.”

Jane grumbled under her breath and stalked to a display of designer evening gowns on the opposite side of the walkway. Her credit card already cringing in anticipation of what her friend would attempt to foist on her, Marissa scooted around Trig. He surprised her by falling in step next to her, and she slid him a questioning glance.

“Thought you might require some assistance getting out of your bra.” Crooking his arm around her shoulder, he flashed his teeth in a wolfish grin.

She smothered a laugh. “I’m sure you have plenty of experience in that department, but fortunately mine unhooks in the front.” Oh Lord, why did she tell him that? Discussing her undergarments sure as hell didn’t help her situation.

“I’d never live with myself if you broke a nail fiddling with the hook.”

“Your concern for my manicure is touching. Truly.”

“Oh, there will be plenty of touching involved. Most likely some licking and sucking too.”

Her nipples tightened at his teasing promise. She really shouldn’t be enjoying this flirty seduction as much as she was. Clearing her throat, she gave a pointed look to the arm he’d draped around her.
Sighing in exaggerated dejection, he dropped his arm. “You know where to find me when that stubborn clasp gives you problems.”

She stepped forward—and killed her squeak when he delivered a light smack to her ass. Flustered, she slashed a look over her shoulder to ensure that Jane hadn’t caught the gesture. Her best friend was still absorbed with the task of scrutinizing the overpriced dresses in the adjacent department. Gusting a relieved breath, Marissa pointed her finger at Trig. “Stop being so naughty.”

“You haven’t seen anything yet.”

Wow, this was better than I expected. When I first read the synopsis I was entirely intrigued and I am so glad I did. Trig is unbelievably handsome and Marissa is definitely one lucky girl. Okay I admit it, I am jealous of her. I just can't get enough of these two; they are perfectly matched. I was a bit sad to have this enthralling sexy story end.

Jodi captures the reader from the word go. I am definitely going back to read Perfectly Christmas!