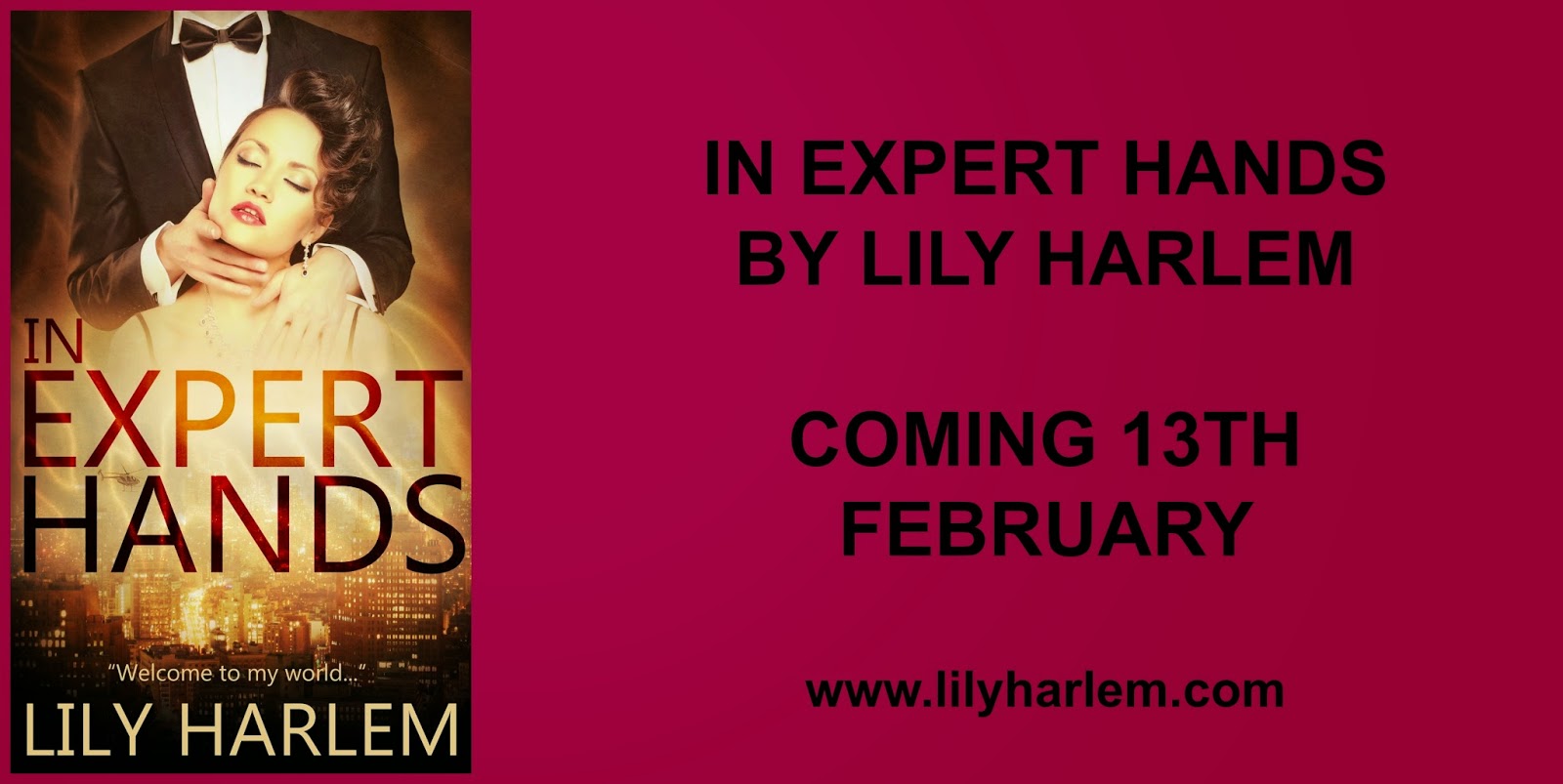 IN EXPERT HANDS
BY LILY HARLEM 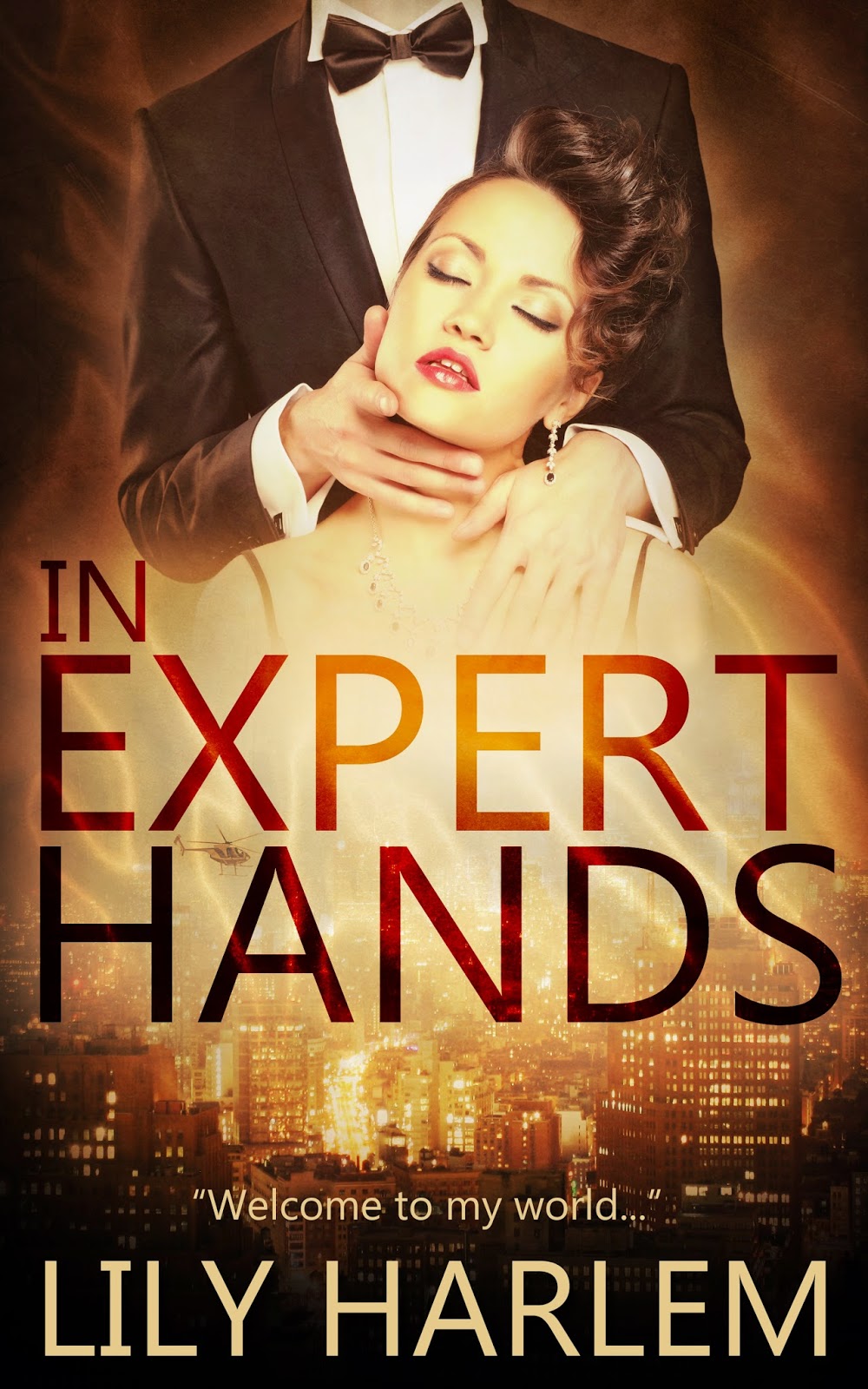 Imogen White has it all—a high-flying career, a prestigious London home and friends she knows will fight her corner. She’s going up, and she’s in control, she’s also got the hots for one very important, very sexy client.

Kane Ward is a self-made billionaire whose determination to be the best of the best has left him alone. He has everything money can buy, yachts, jets, and villas in all four corners of the globe, but even he can’t buy time to suit his needs.

And his needs are very specific, his desires a particular shade of kink and his tastes anything but vanilla. So when he sets his sights on Imogen it’s a given that things are going to get dark, that pleasure will be laced with pain and determining his success will be measured by her blushes and gasps and cries of delight. But Imogen doesn’t need to worry, she’s in expert hands and her every fantasy is about to come true—and then some she’d never imagined in her wildest dreams.

Excerpt from IN EXPERT HANDS 18+

“Would you like a drink?” he asked over the sound of the music.

“No. I drank water after my workout.” He urged her forward. “So shall we go straight into a playroom?”

He glanced at his watch. “There should be something going on to satisfy our voyeur plans for the evening.”

They stepped toward the bar.

Kane indicated another doorway at the opposite end that had a chain mail curtain hanging from its frame. “It’s through there.”

“Ah, K. Long time no see.” A man wearing a similar jacket to Kane’s but with only two stars over the breast pocket extended his hand.

He didn’t wear a mask and Imogen could see that his smile was genuine.

“Nate, how have you been?” Kane took his hand and they shook.

“Great, been in the City for a few weeks on business. Making the most of my free time by coming here most nights.” Nate turned to Imogen and raised his eyebrows. “You have company.”

“I am. You don’t usually bring guests. Special occasion?”

Imogen felt Kane tense. She sensed he wasn’t enjoying having his break from the ordinary commented on. “

No occasion,” Kane said. “Good to see you, Nate, perhaps we’ll get chance to catch up later.”

“Yep. That would be cool.” Nate held up what appeared to be a glass of fizzy water and nodded. He kept his attention on Imogen. “Enjoy your evening here at Sup Space. I’m sure Master K will address your every need.”

“Thank you.” Imogen smiled then felt her cheeks heat as Nate swept his gaze down her body—starting at the collar, then lingering on her breasts and finally on her boots.

Kane stepped forward, tugging her with him. “This way.”

After several paces she touched the collar. “This, around my neck,” she said quietly. “What would happen if I wasn’t wearing it?”

“It would make you fair bait for men like Nate, who are just out to play in a scene, find someone to hook up with.” He glanced at her. “He had no right to look at you like that.”

“Well, the outfit kind of screams look at me.”

“No. You’re with me. I’ve claimed you with a collar. What’s more, I outrank him. He should show more respect.”

“Of course.” He pulled back the chain curtain and opened a door. He ushered Imogen into the new room.

Imogen opened her mouth and stared around, thoughts of Nate vanishing.

Kane moved her from the doorway and into the shadows. He stepped behind her and wrapped his arms around her waist.

“What are your first impressions?” he asked by her ear, his lips brushing her lobe and his breath heating a trail down her neck.

She leant back into him, loving being so close, held by him. But she couldn’t concentrate fully on his embrace because of what was before her. “It’s…sexy.”

“Mmm, I’m glad you think so,” he said, the soft material of his mask rubbing against her temple. “What else?”

She looked around. The room was sectioned into six large cubicles, each one decorated in dark tones and with a combination of low lights and spotlights. Each three-walled area held a bed or a table or some other piece of equipment in the center. Three spaces were occupied.

There was an audience, too, couples, singles, threesomes sitting on more large sofas. Imogen could only see the backs of their heads. Some appeared enraptured, others holding quiet conversations.

“Tell me,” Kane urged, slipping his hand over the smooth material covering her waist. “What do you think about that, over there, to your left.”

Imogen was already staring in that direction. It had been the main thing that had captured her attention.

A naked woman was bent double, tied to a skinny padded table with her ankles fastened to the legs and her arms stretched out on two platforms, crucifix-like. Her skin was pale except for her behind, which was scarlet.

Beside her stood a man—dressed like Kane in black trousers and a velvet jacket—wielding a flogger. He walked around the woman as if surveying the marks on her ass then cracked down the many strands over her skin.

Imogen jerked and a tingle traveled over her buttocks, as though her nerves were empathetic with what the woman on the table was going through.

The woman groaned and moved her head, her face coming into Imogen’s view. She had her eyes screwed up tight and her lips were parted. There was a flush of red on her cheeks that matched the rosy blush on her backside.

“Talk to me,” Kane said softly.

“Is she enjoying it?” Imogen asked, although she was pretty sure she knew the answer. The woman appeared to be in ecstasy, as though she’d folded in on herself and only her body and sensation existed.

“Very much so,” Kane said. “Master Zen is very capable of working his sub towards orgasm just through striking her.”

“Are they just…playing a scene or are they…?”

“Lovers, committed to each other? Yes, actually those two are. They’re regulars here and live the lifestyle.”

“Yes.” He slid his hand to her collar and spanned it with his thumb and fingers. “They live full time as Dom and sub. He commands and she obeys.”

“It sounds…old-fashioned.” Imogen wasn’t sure about the obeying thing. She’d known friends who’d purposely had that removed from their wedding vows.

“It’s a symbiotic relationship,” Kane went on, smoothing his fingers around her collar and brushing her skin.

The woman was struck again—several times in fast succession.

Imogen stared at the spectacle.

“You see,” Kane said. “She needs to be adored, cared for, taken through life by the man she loves. He needs to protect her, satisfy her, ensure that everything is perfect for her at all times. That is what makes him feel complete.”

“And that includes this. Beating?”

“Beating, spanking, flogging, whatever you want to call it, yes, it includes this, because that’s what they both enjoy, it’s their thing. It’s their kink.”

Kane went quiet and Imogen watched as Master Zen stood directly behind his sub. He appeared to fiddle at his groin then his pants loosened around his hips. He pushed forward.

The woman arched her back and her cry echoed around the room.

He reached for her shoulders, dragged her onto him.

“Yes. He’s clearly very pleased with her. She’d getting exactly what she wants tonight.” Kane’s voice was low and husky, as though the sight was turning him on.

Imogen watched, fascinated as the Dom began to fuck his woman with urgency. The sub couldn’t move, she was strapped down, but he was moving for them. Thrusting in and out, hard, frantic, gripping her shoulders, her hair, her hips. His hands were all over her.

Imogen’s knickers dampened and she shifted within Kane’s arms.

Imogen half turned to him, his words a shock, despite where they were and what they were watching.

“Tell me,” he said, cupping her cheek and her holding face. “Tell me what you’re thinking?”

“I…” Imogen was breathing heavily. Fuck. What was she thinking? That she wanted to get fucked like that? She wanted to feel the flogger?

“Would you like to be her, on that table, with Master Zen taking you to the exquisite high she is rocketing towards right now?” Kane asked. “Red and sore, filled to the max? Nothing else in your mind except claiming that pleasure?”

She did, but it wasn’t Master Zen she wanted behind her, yanking her hair, scratching and marking her skin. Sinking deep, so deep. Filling her to bursting point.

It was Kane, or K as he was known here. It was him she wanted.

“Imogen,” Kane murmured, his mouth almost touching hers. “Talk to me.”

“Yes.” The word scratched from her throat. “But—”

He pressed his thumb over her lips, flattening them against her teeth. “No buts. Or if there are, tell me later.” He gave a brief smile. “Yes is enough.”

Before turning her hand to writing Lily Harlem worked as a trauma nurse and her latest HarperCollins release, Confessions of a Naughty Night Nurse, draws on her many experiences while nursing in London. Lily also self-publishes and The Silk Tie, The Glass Knot and Scored have been blessed with many 5* reviews since their release.

Lily also co-authors with Natalie Dae and publishes under the name Harlem Dae - check out the Sexy as Hell Box Set available exclusively on Amazon - The Novice, The Player and The Vixen - and That Filthy Book which has been hailed as a novel 'every woman should read'.

One thing you can be sure of, whatever book you pick up by Ms Harlem, is it will be wildly romantic and down-and-dirty sexy. Enjoy! 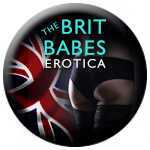