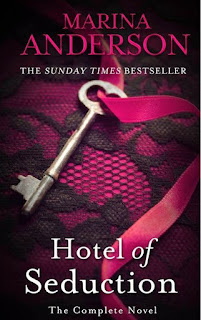 Are you ready for a weekend away at the Hotel of Seduction?

Grace has won the man of her dreams - and her fantasies. Brooding, sensual, wealthy and handsome, their days and nights are filled with pleasure. But can this enigmatic man truly love her?

Together they have set up a secret, exclusive hotel for adventurous couples, designed to open their guests' eyes to the darker, deeper side of desire. But one of the visitors has an agenda, and David is becoming distracted by a new arrival.

As they explore the delights on offer, Grace realizes this is a test: if she fails, she will lose David to his next passing fancy. If she succeeds, she will secure his love for ever, and he will finally invite her into his world . . .

Take some time away and allow yourself to be seduced by The Hotel of Seduction. 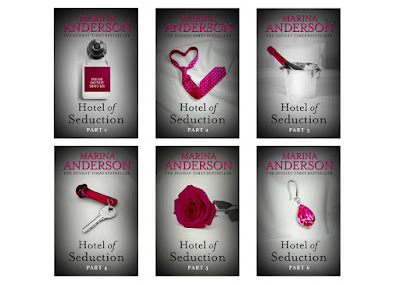 Grace had only just got into bed when David came into their bedroom, and she knew by the expression on his face that he’d enjoyed his evening.  She was almost overwhelmed with jealousy, her mind conjuring up various scenarios that the three of them might have played out in the Victorian suite, but she knew that she mustn’t let him know she was jealous, or it would ruin the whole concept of the hotel, a concept that had been hers in the first place.

‘I must get out of these Victorian clothes and have a shower,’ he said. ‘I was afraid you might be asleep.’

‘No, there was a lot to arrange for tomorrow for all the guests, and some of them had decided to use lounge tonight.’

‘Rather than continue with their fantasy break?’

Grace nodded. ‘I hadn’t expected that either, but it was a nice atmosphere in there.’

‘I’m not sure it’s a good idea for the guests to meet. Personally, I’d want privacy.’

‘If they wanted privacy,’ said Grace, ‘then they wouldn’t have gone into the lounge so that’s clearly not a problem for everyone. It was the Country Suite people and a nice couple from the Pleasure Suite. I think that Andrew had made their day very memorable!’

‘An unqualified success for them then. I won’t be long in the shower,’ responded David, but he didn’t sound as delighted as Grace had hoped. While she waited for him to finish, she tried not to think about what he might be going to tell her. She knew him too well to think that he wouldn’t be totally honest, but she wasn’t certain that she was going to cope with it in the way he’d expect.

When she’d first come up with the idea of a small, exclusive hotel where couples could play out their fantasies in an authentic setting she’d been excited by the prospect of setting it all up and had also felt that it was a way of keeping David’s interest. Although he’d told her that he loved her, she was well aware that love was never necessarily eternal, and in his case might well be very short-lived if he became bored or she started to be too needy.

She wondered why it was that at work she was always decisive, firm and unwilling to tolerate difficult people and yet she’d fallen in love with a man who required totally different qualities from the woman in his life. David loved her for being vulnerable and obedient to his will in the context of their sexual relationship, but now that their private life was overlapping into a professional relationship as well, it was more difficult for her to be what he wanted in private. To make matters worse, she knew that with the arrival of Emily, jealousy was starting to eat away at her.

‘How was your evening?’ she asked lightly, as he came into the bedroom towelling his light brown hair.

‘Fascinating!’ he exclaimed. ‘I think Emily is finally beginning to understand how young women in Victorian times lived and behaved, and that makes the games so much more fun.’

‘It’s a pity she didn’t manage that during rehearsals for the play,’ retorted Grace.

‘Perhaps this will help her acting then!’ said David with a smile.

‘I very much hope she’s going to drop out of Mrs Warren’s Profession. I couldn’t possibly –‘

‘I know you don’t want to face her after this, but in all seriousness I doubt if you’ll have to. Lucien has booked them in for each experience, so she’ll need three weekdays off every month. Now, let’s not talk about your play.’ And sliding beneath the duvet he put his arms around her and moved her close to him.

She could feel his erection nudging against her hip, but knowing that this was the result of what had happened in the Victorian Suite, rather than because he wanted, she drew away.

‘What’s the matter?’ he asked in surprise.

Pushing her back against the pillows, David leant over her and looked directly into her large, brown eyes. ‘No you’re not. You’re annoyed because I’ve been turned on by my evening with Lucien and Emily.’

Staring up at him and seeing the once-familiar shuttered look in his eyes, Grace knew that she had to tell him the truth, and decided to do it in a way that would hopefully give him something to think about too. ‘Yes, that’s true,’ she confessed, ‘but I’m also upset that I wasn’t invited to take part. I like Lucien, and I wanted to spend more time with the two of them. I was disappointed they only wanted you there. I suppose I felt frustrated.’

For one brief moment, before he turned his head away, she saw a flicker of surprise cross his face. ‘Unfortunately we can’t choose what the guests want to do. You’ll be pleased to hear that Lucien wants both of us there in the morning, and the lady’s maid. Hopefully that will satisfy you.’ 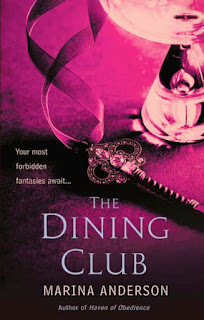 You are invited to the Dining Club.

If you pass the challenges we set, a world of pleasure awaits you.

He is everything she never wanted: brooding, secretive, rich - and far-removed from her care-free artistic lifestyle. Yet David has a power over Grace that she cannot resist, a power that comes from his darker, passionate side.

And now he is ready to truly reveal himself. Inviting Grace to a weekend at the Dining Club, David offers her the opportunity to discover his deepest desires and to find pleasures far beyond her wildest imagination - but only if she if willing to play a series of sensual games.

Grace faces a choice: give in to her doubts and retreat to her quiet life, or truly embrace happiness with David and win over her mesmerizing lover forever.

Marina Anderson is the pseudonym of British author Margaret Bingley, whose novels have been published all over the world. Margaret uses this pseudonym for her series of erotica novels. She also publishes erotica for women under the pseudonym Fredrica Alleyn.