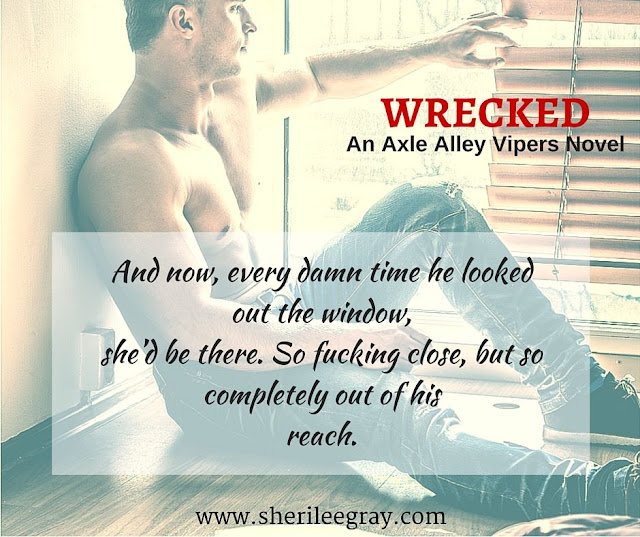 Piper West is finally on her own, and it’s time to get crazy. Except that her overprotective big bro has enlisted his ex-cop best friend to keep an eye on his baby sister. With every move monitored and reported back, Piper’s life has gone from “going crazy” to “being driven crazy.” But a searing-hot kiss with her sexy and scarred watchdog is just the game-changer she needs…

Cole Black owes Piper’s brother big-time, but there’s nothing easy about his new assignment. Piper is all feisty sexiness and curves meant to tempt a man beyond reason, and Cole can’t stop himself. Now he’s caught up in a hunger like nothing he’s ever known, and he can’t get enough…

Even if Piper’s the one girl he’s not allowed to have. 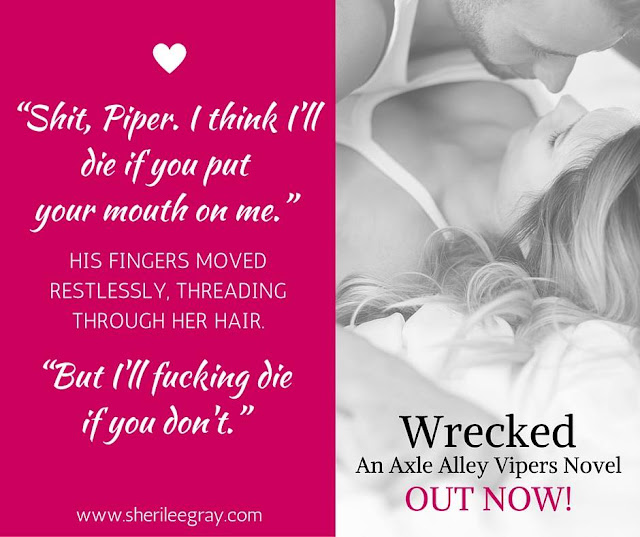 Jesus. He tilted his hips back.

The last thing she wanted was some sad cripple getting hard again while she was pressed up against him.

“You’re drawing a crowd. Maybe you should cover yourself up, yeah?” The words were out of his mouth before he could stop them. She shoved at his chest, but he couldn’t bring himself to let her go.

Her cheeks turned pink, eyes flashing. “Hardly a crowd. It was one car, Cole. And I can’t see how the way I dress would affect you.” She scowled.

“Besides, I thought you’d still be asleep.”

“I was asleep, until you started blasting music loud enough to rattle the windows.” What was he doing? Let her go. Walk away. “Shouldn’t you be working in the garage?”

Where you’re mostly covered up and your delectable body isn’t on display for any asshole to see.

She shrugged, which smooshed her tits harder againsthis chest. “We decided to have a weekend off.” She clung to his shoulders, and it felt good, too damn good. It would be so easy to wrap her legs around his waist and press her against the side of the house. Take that pouty mouth and fucking devour it.

He reluctantly let her go. It was either that or come across as even more of a pervert than he already was where Piper was concerned. Of course that only made things worse. The sudden movement caused her nipples to drag down his chest. The soft heat of her body lingering, as though she’d branded him. He watched her, fighting an internal battle to keep his hands to himself. Her taste, her smell had been etched into his senses, and he wanted more. Jesus, he was hard, and so wound up he was on the verge of splintering apart.

She stumbled back a step and lifted a hand to her blond hair, which she’d piled on her head in a messy bun, and brushed the loose strands back from her face. She stared at his chest for a few beats, no doubt horrified by the scars marking his body.

He waited for her to look up, waited to see the disgust, the pity on her face, stiffening when she lifted her heart-shaped face to his, bracing for what was coming. But there was no pity, no disgust when she looked at him. No, there was something else entirely. Her cheeks were flushed, lips a darker shade of pink than usual. And when she bit down on the lower one, forcing the top one to puff out in a way that was extremely sexy—he wanted desperately to pull her back into his arms and suck on it. But it was her eyes that got to him most, they were bright and…fuck…hungry.

He struggled to breathe, so far gone that raw lust pounded into him, had him close to the edge, close to insanity. “In the future, keep the music down. And put some fucking clothes on when you’re outside.” And as it turned out, jealous as hell. He didn’t want anyone else to see her like this. In his mind Piper was his. He’d claimed her as his when she was seventeen years old—he just hadn’t gotten around to telling her. 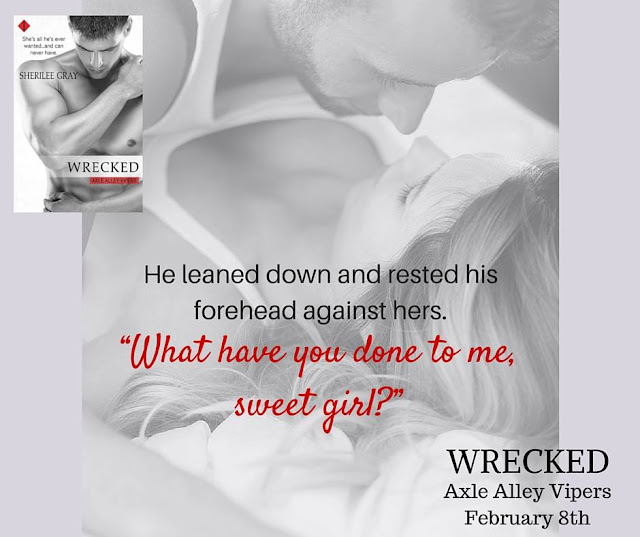 Don't Miss The Other Books In The Axle Valley Vipers Series!

She swore never to trust him again...

Fiery mechanic Alexandra Franco should have known better. Years ago, her best friends' older brother took her virginity and broke her heart-or rather, doused it with gasoline, lit a match, and then walked away. And Alex definitely should not have indulged in another hot night with him after the fact. He's not the same boy she fell for, and she sure as hell doesn't want anything to do with the wealthy, ruthless man he's become.

Walking away from Alex was the biggest mistake of Deacon West's life. She belongs with him, and if getting her back means playing dirty, so be it. If she'll grant him a three-month, no-strings affair, he won't sell the building Alex and his sisters use for their auto repair business. Hell, he'll even sign it over to them. But will Alex ever entrust her heart to him again, or are they destined to crash and burn?

He'll rev her up and drive her to the edge...

Rusty West swore she was done with men. Instead, she channeled her passion into West Restoration, the car shop she runs with her sisters. But Rusty's aloof composure fades when the owner of the competition comes striding into her shop, over six feet of sexy, rough-edged confidence…hot enough to send Rusty's motor into overdrive.

Reid Parker worked his ass off to get what he wants—and what he wants is West Restoration and its crew. He never expected to find a shop of all-female mechanics…or the stunning redhead who ignites a lust that threatens his cool. But Reid plays carefully. He never, ever gets involved with a woman beyond one night.

And no matter how hot the sparks, Rusty will never compromise her business for a man…

Sherilee Gray writes sexy, edgy contemporary and paranormal romance. Stories full of heat and high emotion, following stubborn characters as they fight against the odds… and their happily ever after.

She’s a kiwi girl and lives in beautiful NZ with her husband and their two children.

When not writing or fueling her voracious book addiction, she can be found dreaming of far off places with a mug of tea in one hand and a bar of Cadburys Rocky Road chocolate in the other.