Review ~ Betting On Bailey, A Playing For Love Novel, by Tara Crescent 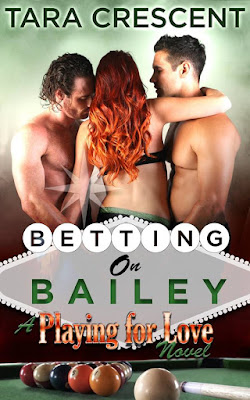 Bailey Moore is not in the mood for love…

She just needs to learn to play pool in a hurry. Out of spite, her loser ex-boyfriend has saddled her with a rent bill she cannot afford, and Bailey’s not going to take it lying down. She’s going to hit him where it hurts, by beating him at his favorite game, in front of all his friends.

Now, she needs to join a pool league, find someone to coach her and get really good in a hurry. Perhaps her hot new teammates Daniel and Sebastian could be persuaded to help…

Sebastian Ardalan is too busy for love…

His restaurant has earned a prestigious award, and the offers are pouring in - cookbooks, TV shows, franchise deals and more. His focus should be on his career, but Sebastian can’t stop thinking about the curvy redhead who has just joined his pool team...

He’s shared women with Sebastian before, but there’s something special about Bailey. Before he knows it, he’s rashly bet fifty thousand dollars that Bailey will win a crucial pool game…

However, Daniel is negotiating a deal that’s vital to his company. If the sexy ménage becomes public news, all hell will break loose…

When the stakes have never been higher, can the three of them bet on each other and take a chance on true love?

Note: Betting on Bailey is a stand-alone ménage novel (mfm) and part of the Playing For Love series. It is full of steamy scenes featuring a billionaire businessman, a bad-boy chef and a curvy redhead. Intended for mature audiences only. 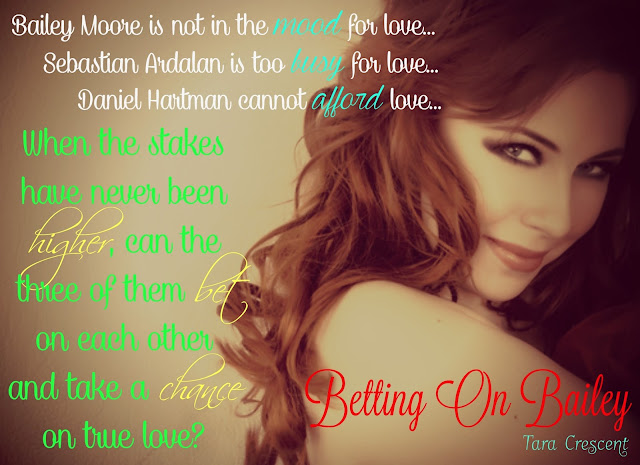 We walk away from Clark. “Thanks for the rescue,”I tell him. “Was it that obvious I wanted to hit him?”

“Not to everyone. What was Clark being a dick about tonight?”

“Some woman who’s joining our team.”I grimace in distaste. “He’s hoping she is, and I’m using his words, a hot piece of ass.”

Sebastian shakes his head. “Classy guy, Clark. Still, punching him isn’t going to do either of us any favors.”

“Sad but true.”I turn around to look at Ellis, who is shaking the hand of some young guy, his chest thrown out. No doubt he’s now introducing himself as the team captain. Good for him.

The bartender brings us a couple of bottles of beer without being prompted. We take a seat at the bar as Juliette steps forward to play the first match. “I'm glad you came out tonight,”Sebastian says. “For the last three weeks, I've just had Clark and Juliette for company. It’s been rough.”

I laugh. Sebastian has a very conflicted relationship with his business adviser. She’s relentless about making sure he’s in the public eye, and at heart, Sebastian’s a low-key guy. “Juliette's not that bad.”

“She's really gung-ho about this franchise idea,”he says. “What about you? How's the takeover going?”

I frown. “If they weren’t strategically important to us, I’d be tempted to just walk away. They’ve been consuming all my time in the last month. Each conference call produces some bullshit objection. Now, it looks like their board is going to fight.”I pour half the bottle of beer down my throat. “And do you know why? Because they don’t want to be exposed to New York values. Those were their actual words.”

“What are New York values? Paying too much money for real estate? Ordering takeout more than five times a week?”Sebastian asks dryly. “Is Cyrus riding your ass, then? Telling you to stay out of the tabloids?”

Sebastian knows my family dynamics well. I’m about to confirm his guess when I’m distracted by the sight of a woman walking toward Clark.

She’s not Clark’s type, that’s for sure. Her figure’s more generous that Clark typically prefers, and her black dress wouldn’t be out of place at a nunnery. She’s wearing sensible flats and her red hair is pulled back into a ponytail.

Though she’s sending out absolutely no signals, there’s something about her. I can’t tear my eyes away. The primness of her dress can’t hide her body’s curves. Her breasts are round and lush, and I can’t wait to see her ass as she bends over a table.

At that image, my cock stirs. Pavlov would have been proud of me. Bend a woman over a table, and I either want to spank her or fuck her, or both.

“That’s the woman Clark was talking about?”Sebastian’s eyes are glued on her as well. “She is a hot piece of ass. Let’s go over and say hello.”

When we reach them, Sebastian sticks out his hand. “Hi,”he says smoothly. “I’m Sebastian.”

“This is our newest teammate,”Clark interjects. “Bailey Moore, meet Sebastian and Daniel.”

“Thank you, but it’s probably not a good idea before I play.”Her voice is soft. Pretty. She makes a face. “I’m already terrible at pool.”She looks at Clark. “Gabby warned you, right? But I’d really like to learn.”

The sincere, fervent need in her voice startles me. She wants this. Though she’s doing a good job hiding it, she’s nervous. I can feel the tension emanate in waves from her, and I wonder why. It’s just a stupid pool game.

Clark nods ungraciously. “Juliette’s almost done,”he says. “Why don’t you go up next so I can see what you can do?”

“Okay.”She bites her lip, and desire clenches through my groin as I see her straight white teeth indent her tender pink flesh. A sideways look at Sebastian reveals that she’s having the same effect on him. Clark’s the only one who is immune. Fool. 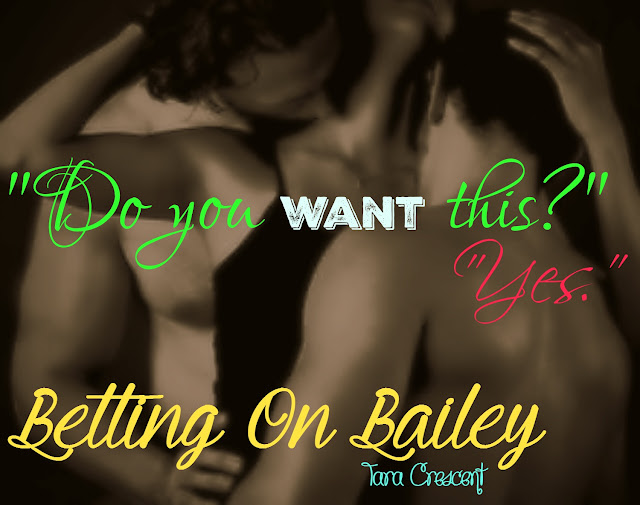 Bailey Moore is the type of girl you want to be friends with. She's funny, feisty, all heart, and sexy. She'll be the shoulder to cry on in times of trouble, and be there to support you in your times of triumph. So when her ex serves her with a rent bill, she decides to take matter into her own hands and beat him at his own game. Literally!

She needs to learn to how to play pool and in a hurry, so she's joined a team in the hope that she can learn enough to win. She's not the best player, so even though she's committed to learning, she's not positive she'll ever be good enough.

The minute she walks into the club, Daniel and Sebastian stand up and take notice. They notice that she's not the typical woman expect them to be with, but there is something about her that they find completely alluring. So, they will coach her on the game while pursuing an unconventional relationship that will bring these three closer together in more ways than one. However the three are all at a critical juncture in their careers, that one misstep could cause a world of trouble for them.

I really enjoyed this fast paced, sexually charged book that was I couldn't put down. I loved Bailey's attitude and her gunhoe attitude to beat her ex and show him up on his own turf. Daniel and Sebastian are handsome and willing to fight for what they want no matter the cost. I love that in the end, they would do anything and everything to make the women they love happy. The three give as good as they get and don't take their relationship for granted.

And Bailey's group of friend make this story even more enjoyable with their side comments and antics. They add just the right about of sassy to even out Bailey and always there for each other. I can't wait to read more about these ladies!

Tara is brilliant author and her writing is superb. I look forward to reading more from her.

In my spare time, I write of course. I also read, garden, travel, cook, and almost never clean. I just started watching Walking Dead on Netflix (zombie erotica, anyone?), and I’m impatiently awaiting the next episode of Doctor Who. (I would kill for a TARDIS.)

I’ve scribbled bits and pieces all my life, chiefly inspired by what I’m reading, which tends to be mainly science-fiction and fantasy, with a healthy sprinkling of romance and erotica thrown in.

I’m a huge believer in happily-ever-after, but tempered by real life, where happily-ever-after is possible, but takes work. My favorite kind of romance stories are ones that are somewhat believable; I like strong men and women who know what they want out of life, and are driven to get it.

From time to time, I blog about what I’m writing at http://www.taracrescent.com. The blog is also where I post book excerpts; highlight information about upcoming promotions, and so on and so forth. Follow me there to keep up with all the fun! 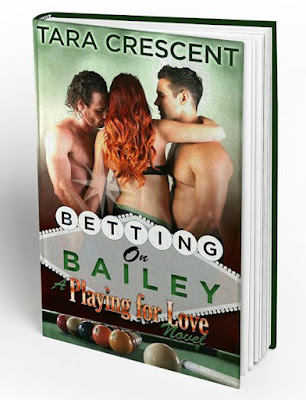