Angelica Rose's mom always told her that desperate times called for desperate measures. Walking into a strip club and asking for an audition certainly qualifies as desperate, but when her mom's battle with cancer ends months before Angelica is due to start college, she doesn't feel like she has much choice.


The moment Morgan Cadwell sees her on his stage, he knows she's the one woman who could make him break all the rules. There's no way he's going to let Angelica dance for other men, so he hires her as his live-in personal assistant instead.


Morgan's offer lets Angelica keep her clothes on...but little does she know that, in the end, he'll make her bare her soul instead.


Warning: This book is about an alpha caveman and a sweet but fierce virgin heroine who fall ridiculously fast in insta-love. If you're okay with that, then enjoy! 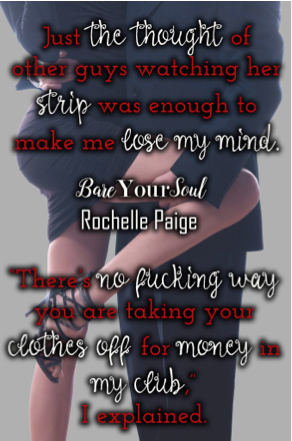 
“Hey, I thought there was no touching in lap dances?” I tried to protest.


“There will always be touching between you and me,” he answered.


I knew it shouldn’t get to me. I didn’t know this guy and I was acting a part to try to get a job. But holy hell his words and his touch were turning me on and confusing me. If I was honest with myself, I’d admit that there was crazy chemistry between us and maybe—just maybe—I was using this situation to my advantage to see what happened.


“There is no you and me,” I retorted as I tilted my body away from him.


“There will be,” he insisted.


Some of my uncertainty must have shown on my face because his hands gentled and he ran them from my hips to my back and stroked softly. He lightly tugged on the material but it didn’t fall any further. “Show me more.”


I could feel his cock hard underneath me, my pussy resting over it and driving me more than a little wild. I’d never been in a situation like this before. His dark eyes burned into mine and I threw all caution to the wind as I undid the rest of the buttons on my dress. It fell, the material gathering around my waist. Morgan held my eyes as his hands moved away from me to grasp my dress and toss it to the ground.


He practically growled as his gaze roamed over my body. I’d chosen my lingerie carefully this morning, choosing the nicest set I owned. It was white lace, so I was worried it made me look too innocent when I’d picked it out, but I didn’t have a lot of choices. Now I was thrilled with my selection because it fit the role I was playing to perfection.


“Maybe if you’re very good for me I’ll forgive you for being naughty,” he said as he trailed a finger down my chest and snapped the front clasp of my bra open.


His action surprised me, and I moved my hands to cover my chest without realizing what I’d done. He quirked an eyebrow at me in a subtle challenge, like he’d known all along that I wouldn’t be able to stay in character. Taking a deep breath, I remembered the role I needed to play if I wanted this job and forced my arms back down.


“What if I want to be bad for once?” I asked as he slid my bra straps down my arms.


It was like he’d woven a seductive spell around me, making me forget why I was here and all of my troubles. I’d never felt anything like this before. My skin was on fire, goosebumps running along my flesh. My panties were damp and I couldn’t stop myself from rubbing lightly over his length. My body was tightening in anticipation of what would come next.


“As long as you’re with me, you can be as bad as you want to be, Angel,” he whispered before closing his mouth over one of my nipples. Each hand held one of my breasts, squeezing lightly. He plucked at the other one with his finger and thumb, making it pucker with need.


“Ohmigod,” I gasped at the sensation, closing my eyes so I could pretend this wasn’t actually happening.
“Look at me,” he ordered, and my eyes popped back open to find him staring up at me. “You keep your eyes on me, Angel. I want to see every single thought that runs through your head. No hiding.” 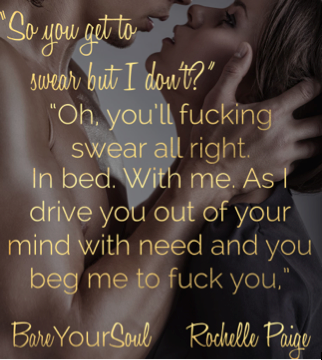