Hartstrings, Jaded Regret, #3
by L.L. Collins
Get it for Free from Kindle Unlimited
Amazon US | UK | AU | CA

Tanner Hart, the All-American bad boy bass guitarist of Jaded Regret, has one motto— play women’s bodies like he does the strings of his guitar— hard, in tune, and giving it his all until the show is over. The only strings he wants attached to him are the ones he plays on the stage.

He has quite the reputation, even with his own band, and he likes it that way. It keeps the truth of who he really is locked deep inside. But there's so much more to him than anyone really knows…

Now that he’s successful, he can afford to find out what really happened to the only girl who’s ever held his heart. The only thing is…will he really want to know the truth?

When Mackenzie ‘Mac’ Shepard finds herself in a situation she’s been in too many times before, she expects to do what she’s always done— cover it up, accept the apologies, and move on. She knows trying to get out is futile. What she doesn’t expect is for the world famous Tanner Hart to burst into her life like a knight in sexy armor.

When their lives collide and hearts get involved, can Tanner keep his hartstrings from being tangled up in his past, or can he make a new kind of music... with his heart?

“You’re safe.” I put the key card in the door and pushed it open, allowing her to go ahead of me.

She dropped her purse on the table by the door and wrapped her arms around herself. It was then that I noticed her shaking again, her body trembling from head to toe.

“Mackenzie.” I rubbed my hands on her arms as her cerulean pools of pain stared right through me. I felt her knees give way, and I knelt with her to the floor. Her hands covered her face, muffling her sobs. “You can do this.”

She shook her head. “You don’t understand. He’ll never let me go, Tanner. Now he’ll be after you. I-I’m sorry. You should let me go back to him. It’ll be fine. He loves me, in his own way.”

“You aren’t going back there. You’ve let him hit you for the last time. He doesn’t love you, not if he can hurt you like this. And he can try all he wants to come after me. You don’t need to worry about that. Come on, let’s get you cleaned up.”

I lifted her off the floor, and she allowed me to guide her to the bathroom. I wrapped a towel around her shoulders and started the bathtub. I could feel her gaze on me, but she didn’t say a word as I gathered some shampoo and soap from the shower. Something deep within me wanted to get every trace of blood off her body so that she could start fresh.

I tested the bath water and then turned to her. “Do you want to get in? I thought I’d help you get the bl—get clean.”

She worked her lip between her teeth again. Her hands shook as she gripped the edges of the robe she still wore. Dark circles under her eyes highlighted her face, but I still found her breathtakingly beautiful.

“I can leave the room.” I didn’t want to, but not for the reason I’d normally want to be in a bathtub with a woman.

Mackenzie gripped my shirt so fast, I jumped. “Don’t leave. Please.” Her voice wavered with unshed tears, and I nodded. 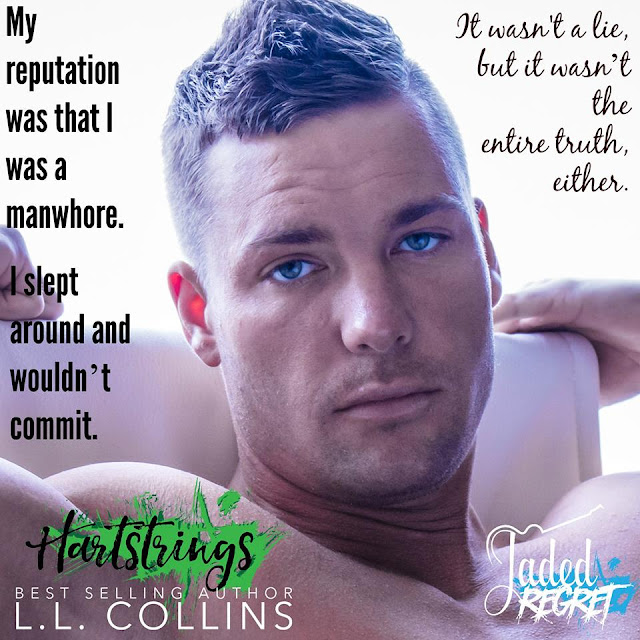 L.L. Collins loves spending her days in the Florida sun with her husband and two boys. LL has been writing since she was old enough to write. Always a story in her head, she finally decided to let the characters out made her lifelong dream of becoming an author come true in the self-publishing world. She's the author of the Living Again Series and the Twisted Series, plus standalones, Back to the Drawing Board, Sentenced, and Snared: A Jaded Regret Novel. Visit LL on her website, www.llcollinsauthor.com and on all social media. Look for more of her emotionally charged novels soon!