Book Tour & Giveaway ~ A Family No More by Amy Quonce 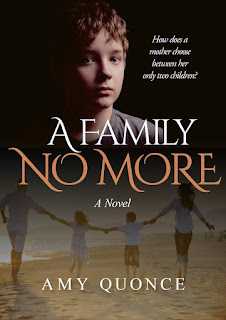 How does a mother choose between her only two children?

Twelve-year-old Andrew Preston was highly intelligent and extremely cunning; typical or any other sociopath such as himself. While he loved to see how much he could get away with without being caught, he took his greatest pleasure in harming his autistic little sister, Megan.

The Children’s mother, Kate Rose, always went to great lengths to protect her kids, but things changed after Andrew confesses to the crime against his sister. Now she must try to figure out how to protect them both from the different sides of the courtroom. Suddenly plunged into a twisted justice system as the criminal case unfolds, Kate must choose between her daughter’s safety and the law.

After spending many years working in the education system in Upstate, New York, Amy Quonce moved across the map with her daughter and one very spoiled dog. She now spends her days writing from a hammock nestled between two palm trees and works as a Licensed Massage Therapist.

As Joe pulled into the crowded school parking lot, he could sense the nervousness in his wife. He kissed her cheek and told her how proud he was at her bravery. Kate wasn't sure if it was valor or cowardice, but more of a force that guided her inside the building alone. Her legs shook so much she could barely get out of the car to make the short walk into the school. Through the disorientation, she found the main office and managed to tell the secretaries she needed to sign her child out for an appointment. Doing so made her realize how hard it was to say those words…her child.

It couldn’t be her child who had done such vile things against her daughter. It certainly wasn't her child who was about to be taken down to the police station to be interrogated by detectives. Kate’s body shivered thinking about it. Was he her child anymore?