Clay Maxwell is a smart, quick witted, sex-driven, manwhore with the good looks to match. Plenty of women have shared his bed, but only one has ever been constant, Andrea.

Their rules were simple. When they’re together, it’s just the two of them. When they’re apart, anything is fair game. And it worked. For ten years.

But one of them has changed the game…

Clay must decide if his player ways are worth losing the one girl who has always been there.

“Yet another awesome read from K.A. Linde! Clay is HOT and BAD in the best way possible, you won’t be able to put it down! I literally was begging for more!” -A.L. Jackson, NYT Bestselling Author

Liz plopped into the chair next to Andrea. “It is a madhouse! Be glad that Clay is already with you,” she said, brushing her long blonde hair out of her face. “Brady got all caveman on me when I said I had to find my own seat! He didn’t want me to leave his side, but it’s not like I can sit with all the congressmen!”

“He just likes having you with him,” Andrea said sensibly.

Liz brightened at the words. “Yeah. He’s a little protective.”

“A lot,” she admitted. “But he had to be during all the election chaos we had to deal with.”

Andrea tapped Liz on the hand. “Honey, that runs in the Maxwell blood.”

“You’re lucky though,” Andrea said. “Brady is a great guy. A respectable man. It was nice to see him settle down and with someone who could keep up with him.”

That sounded strangely like a compliment. Clay had never really been sure what Andrea thought of Liz. Their first meeting, in which Andrea had called Liz boring and promptly told him not to fuck her, had been pretty memorable. Since then, the two hadn’t exactly gotten off on the right foot, but it seemed that they both were becoming more accommodating to the other. He didn’t even know when that had happened. He seemed to be missing a lot lately.

Liz shot Andrea a surprised look, and then her gaze moved down to her engagement ring. “I’m glad to see him settle down, especially with everything we’ve been through.”

“This is good for you two.”

“Thanks, Andrea,” Liz said with a warm smile.

Clay pretended not to be paying attention when Liz leaned over and whispered to Andrea, “And what about you and your Maxwell brother? Can you get the black-sheep bad boy to settle down? Can you tame his ways?”

Andrea laughed. “I don’t want to tame him. I like him the way he is—wild and mine.”

In all, Struck from the Record was an entertaining read. I loved the ending, and adored the epilogue. It was a bit of a bumpy ride for me, but I'm so happy to have gotten Clay's story and, best of all, his happily ever after. ~ Give Me Books

I really liked the Clay and Andrea dynamics and what makes it so fun to read are the games they play with each other. There’s this beautiful tug of war between the two characters that really sucked me into the story. I never knew how a character was going to react and I was on the edge of my seat. It’s never a dull moment in the K.A. Linde world right? ~ Jacqueline's Reads

As far as KA Linde books go, this is one of my favorites. This story is solid. Polished. Messy. Evocative. Sexy. Angsty. Everything from the cover, to the seriously smart writing, to these characters that I hate to love and love to hate at times is simply spectacular. My favorite thing about this author is her ability to take characters we've vilified, characters that do and say all the wrong things, characters rife with flaws, and demand we fall in love with them. ~ Jessica (Angie & Jessica's Dreamy Reads)

I have read just about every K.A. Linde book out there. I have loved her Record series since book 1. The Maxwell family is the Kennedy's of our day. Ok, I might be going a little crazy, but you get the point. The Record series has been one of those series that has stayed in my heart since I met Brady Maxwell in Off the Record. ~ My Girlfriend's Couch Blog

This book had me hooked from top to bottom, left to right, beginning to end! I absolutely fell hard for Clay because he had such a flirtatious attitude and the things he can say to women can absolutely make you melt in your panties!! ~ Lorena Garcia -- Brittany's Book Blog 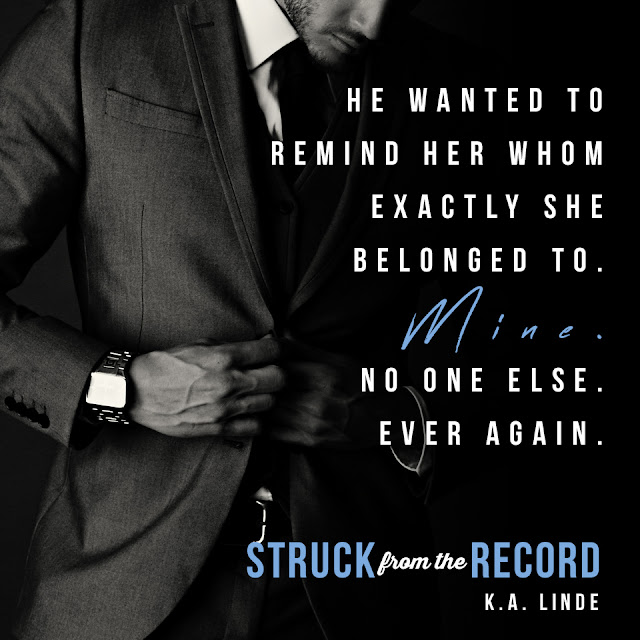 K.A. Linda is the USA Today bestselling author of the Avoiding series and the All That Glitters series as well as seven additional novels. She get up as a military brat traveling the United States and even landing for a brief stint in Australia. She has a Masters degree in political science from the University of Georgia and is the current head coach of the Duke University dance team. 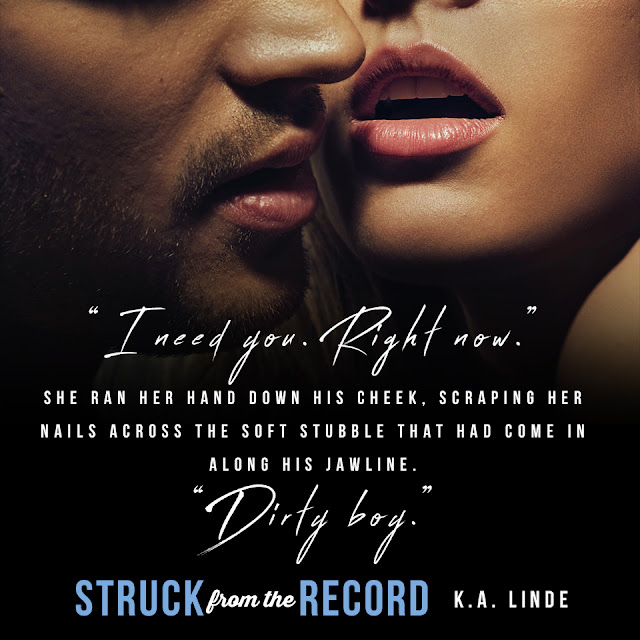