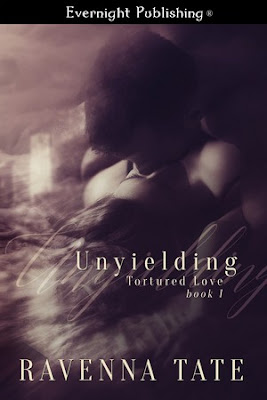 Graphic designer Lynda Shelton has agreed to marry Mergers and Acquisitions legend Merrick Dalton for one reason only—to save her family’s company. She’s warned this is a marriage in name only. Merrick will never love her. That’s fine with Lynda because she has sworn off men.

Merrick Dalton has wanted Shelton Energy for a long time, so when he’s asked to save the company, he jumps at the chance. He has vowed never to love another woman, but Merrick can give Lynda what he’s been assured she wants—material comfort and social standing.

The one place where Merrick and Lynda connect is in bed. She has a penchant for his kinky tastes, and he stirs desire in her like she’s never known. But when their secrets surface, the reason they married turns into a dangerous game of illusions and lies. 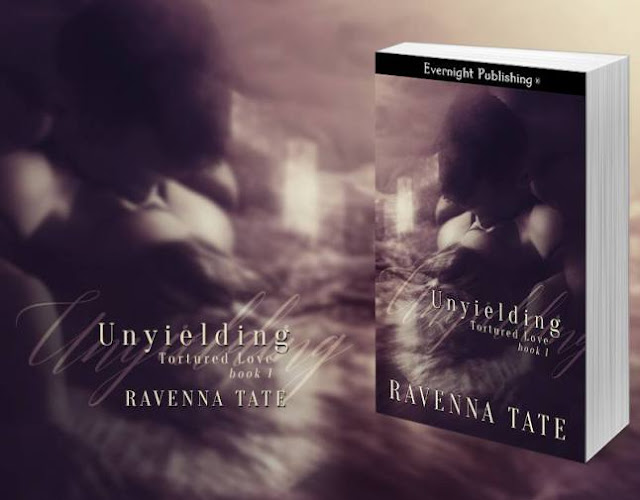 Lynda knew Merrick was going to kiss her before he reached for her, cupping her face with a hard grip. She felt powerless in his presence, but not frightened. Not by a long shot. Her pussy was wet and her clit throbbed. The aura surrounding this man was possessive and determined, not cruel.

Merrick captured her mouth in a kiss so hot she was sure the bed would catch on fire. Lynda moaned into his open mouth, her body alive with sensations it hadn’t experienced in too long. A tiny voice screamed in her mind to stop, but she ignored it. She wanted this. She wanted her husband to take her, claim her, make her his own.

His tongue pushed inside her mouth and assaulted hers, sending shockwaves of arousal coursing through her limbs, and then into her groin. He cupped her left breast, squeezing it hard, but even that pain turned into desire as she moaned again.

“You’re my wife.” His voice was gruff and smoky. “And I am going to fuck you.” 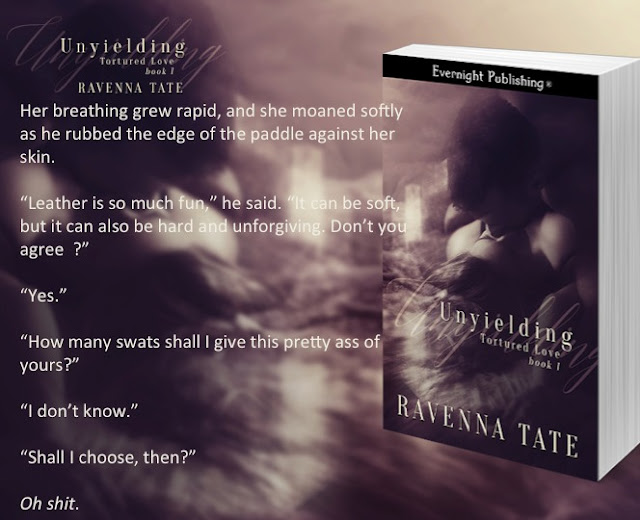 Merrick Dalton is a man that has seen the devastating effects greed can cause. Because of that, he's built walls around his heart to protect himself from the hurt that has made him the man he is today.

Lynda Shelton is a woman that as been betrayed by those she has loved, people that she thought would protect her and love her as she loved them. Because of her past, she been a bit of a loner and distanced herself from the lifestyle she was born into.

Circumstances arise that bring these two lonely souls together. So can a real relationship grow between the two that started out as just a business arrangement? Can they bring down the walls that they built around their hearts enough to let each other in? And how will their relationship be effected when the secrets each have kept come to light, will they be able to move past the lies to learn to trust each other?

Unyielding is a captivating story about two people that never thought a business deal would lead to a love that would heal their broken hearts. Merrick and Lynda went into their marriage believing lies about each other, but as they got to know each other they began to uncover the truths.

What I loved most about these two was their connection, and not just in bed. I loved how they were able to move past the reasons they got together to really get to know each other, the heart of each other. Neither had a stellar past, but they worked through issues together, leaning on each other. You are able to watch them fall in love even as they both fought their feelings.

Merrick is just as demanding in the boardroom as he is in the bedroom. The things to says and does will have you panting and wishing you were Lynda. That man is truly on sexy beast. I adore how he protects Lynda, the way he fights for her, the way he stands up for her. That makes him extremely swoon worthy.

Lynda is a simple person not needing all the materials things others would desire, she's a down to Earth kind of woman. I love how she stays true to herself no matter what. Where others would have falling, she is strong enough to keep standing and holding her head high.

This was an enchanting book that captivated me from the start until the very end. It kept me guessing on what was going to happen next. So many questions to answer... how is Merrick and Lynda going handle the next obstacle thrown in their path; would those that betrayed them be brought to justice; would this end up being a cold marriage or something deep and profound?

Unyielding is a remarkable beginning to this series and I can't wait to see what the next book will bring. 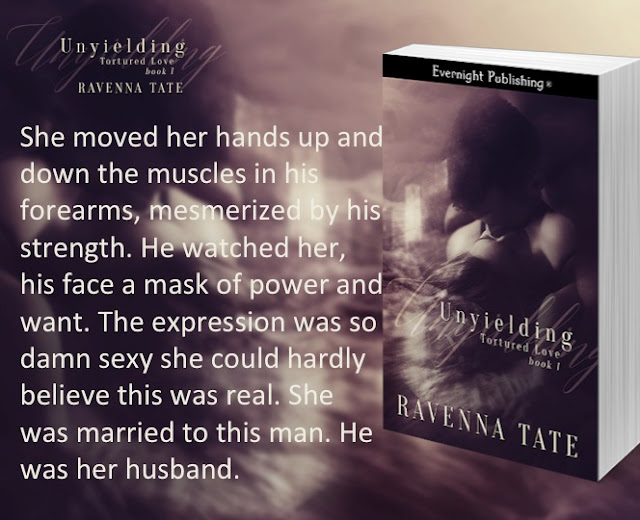 He kissed her rough and hard, shoving his tongue into her mouth. Lynda melted against him, powerless to do anything except enjoy it. Her hands circled his waist, then moved to his firm ass. He moaned deep in his throat, so she pushed his sweatpants down and reached between their bodies to grasp his cock.

“Oh, baby…” He trailed his tongue across her cheek then down to her neck, where he planted tiny bites along her jaw and collarbone. Lynda stroked him, moving her hand up and down over the entire length of his dick. “That feels so fucking nice!”

He was rock hard and slick, and she was sure she’d go out of her mind with need. Merrick moved his hand off her face and slid it between her legs, massaging her clit with one thumb while his fingers probed her wetness. “You’re ready for me, aren’t you, Lynda?”

He let go of her and stepped back, then removed his sweats and tossed them across the room. When he embraced her again, he eased them both down to the floor. He covered her body with his and kissed her again, taking his time and torturing her with desire.

She moaned into his mouth and writhed against him, running her hands up and down his back and ass. He had such a beautiful body, and the way his muscles flexed under her touch left her breathless. The power emanating from this man was intoxicating. She couldn’t get enough.

Merrick released her mouth and trailed his tongue and hands over her breasts again, then spread her legs and dove between them. “I can smell how fucking ready you are for me.”

She cried out as he clamped his mouth on her pussy, sucking hard. It took mere seconds for her to come, and when he realized what was happening, he pushed two fingers into her wetness. Lynda was nothing at that moment except a body filled with lust. Her mind couldn’t process anything except Merrick and what he did to her.

Merrick moved his fingers in and out, prolonging her contractions until she could hardly breathe, and then he slid a finger into her ass. This time, it didn’t burn. It only served to make her want more inside there. She wanted him to fill her up and fuck her raw. She’d never felt this way about sex. Not even close. This man had put a spell on her and she was powerless under it, but that’s exactly where she wanted to be.

Merrick brushed a hand across her hair in a tender gesture that left her speechless, and then he sat back on his heels, lifted her hips from underneath, and plunged his dick into her pussy. She groaned loudly as the sweet sensations from his thrusting washed over her. Her back hurt from lying on the floor, but she didn’t give a shit. She never wanted this to stop.

He pulled her into a sitting position so she was on top of him, and then kissed her again, cupping her face with both hands. When he released it, he grasped her hips and moved her up and down. “That’s it, baby. Fuck me good.”

With his cock pushing all the way inside like this, Lynda gasped at the combination of pain and pleasure coursing through her body. He was so damn big! But it felt fucking incredible. She clung to his arms and shivered as the muscles in them flexed with each movement.

“Look at me.” Their eyes met, and Lynda’s heart fluttered at the expression on his face. It was a combination of pure lust and awe. “You’re my wife. You’re mine. I’m not letting you go.” 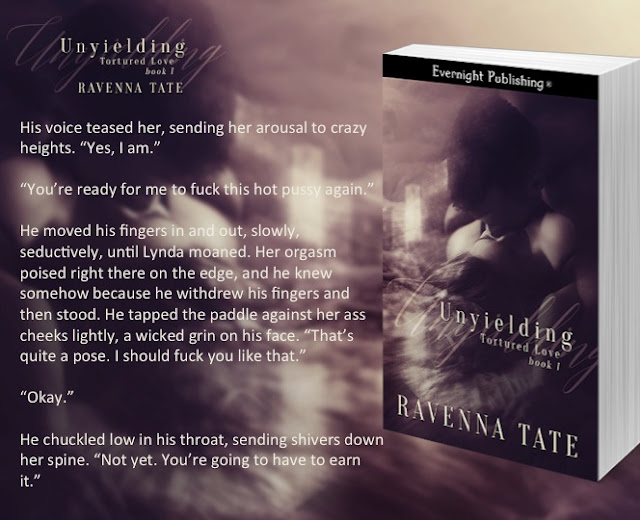