Blog Tour & Review ~ Do It Yourself by Nikky Kaye

Sarah began her DIY education by ditching the biggest tool in her garage—her husband. Now she’s realizing that not just her marriage was boring, beige and transitional, and she’s in over her head.
Luckily, Chris the hot young handyman is teaching her how to screw, drill, and hammer—and also how to use her power tools.
Together they’re updating her wiring and unclogging her pipes. But when Sarah worries that she’s treating Chris like her own personal power tool, what will she do? Will she pull the plug?
This sexy 25,000-word novella features adults in adult situations and using adult language.

A low growl built in his throat, his chest heaving as he struggled with his anger toward my ex-husband. I shrugged, looking pointedly at his hands clamped on my upper arms.
“Chris, you’re scaring me a little. You’ve gotta breathe.”
My hands went to his forearms, stroking up and down the golden dusting of hair to try to calm him. But it was like rubbing a cat’s fur the wrong way. His jaw clenched, relaxed, then he tensed all over.
“Sarah… I’m not a violent man.” Huh. Could have fooled me right then. He screwed his eyes shut and pressed his lips tightly together. I started smoothing my hands down his chest. It wasn’t working. In fact, it might have been making things worse. “I’m not a violent man,” he repeated.
“I know.”
“But I want to kill him,” he ground out.
“I know.”
“And I want to fuck you.”
“I—“ Oh. My hands stilled on his pecs. Other parts of my body responded differently. His fingers loosened over me, sweeping down to my waist, and he tugged me flush against him. Every inch of him was taut against me. There was some kind of intrinsic chemistry between us, connecting us like fishing wire—translucent, almost invisible, but dangerously sharp if stretched too tightly.
With care and precision, and almost in slow motion, I went up on my tippy toes and pressed a soft kiss to the underside of his jaw. He dipped his chin, his lips parting.
“Tell me no,” he pleaded hoarsely. He searched my face, something primal and ancient in his flashing eyes.
I swallowed. Hard. “I c-c-can’t.”
His broad shoulders slumped, his eyes closing.
“I can’t say no,” I said in a small voice.
The look on his face didn’t even have a chance to register in my brain before his mouth fastened on mine. Every hair on my arms rose, my nipples chafed under my sundress, and wicked heat carved through my core that had nothing to do with the temperature outside.
We took his t-shirt off together, our hands trembling against each other. He toed the runners off his bare feet while my shaking hands struggled with his zipper. With an airy swish, he swooped the cotton dress over my head and dropped it to the floor unceremoniously.
His mouth traveled over my throat and down to my shoulder, where his tongue traced a line that the strap of my dress had left there.
“You weren’t wearing a bra.” It was a statement, not a question. I hummed in response, needing more of his kisses on my skin. Everywhere he touched me made an invisible impression, like fingerprints under a UV light.
Something bubbled in my chest. “Look closer.”
“I can’t get much closer,” he mumbled against my neck.
“Get back and look closer.”
He raised his head and leaned back a little, his lips quirking. “You weren’t wearing panties either?”

This was my first Nikky Kaye book and I was pleasantly surprised with my delight with this story.

I love how Sarah didn't let her situation get her down, she taught herself things she never imaged she'd ever do. I love her attitude and confidence. The chemistry between her and Chris is electric and I really loved all their banter while fixing her powder room remodel. The sparks that fly between the two soar off the pages.

I would have loved to have had a little more to the story to see how these two fare in the future, but otherwise I rather enjoyed it and look forward to reading more from Nikky, 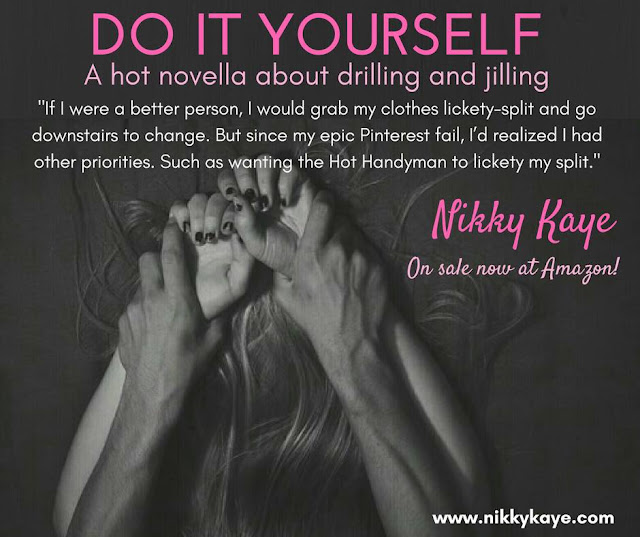