Cover Reveal ~ Secret of the Souls, Pool of Souls #2, by Terri Rochenski 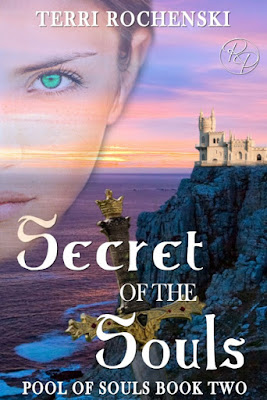 Thrust out of their homes by a human High Priest on a vengeful mission, the Natives of Derlund no longer have a place to call their own. One escaped capture, however, and now she, Hyla, is the only one who can save her people.

For, Hyla, though, saving her nation isn’t her ultimate goal—returning to the Pool of Souls is. Becoming its Guardian and preserving their faith is her heart’s desire. The perils of her current journey, though, could leave her unable to fulfill that dream.

To find her way back to the Pool, Hyla must live among dangerous, powerful humans willing to defend the Natives, and must submit herself—her Talents—to them. While her protection is paramount, plots to end Hyla’s life will push her to her physical and emotional limits.On the edge of sanity, her courage tested, and convictions nearly broken, Hyla’s final test of loyalty to her faith comes with the death of one she could have loved.

Terri started writing stories in the 8th grade when a little gnome whispered in her brain. Gundi’s Great Adventure never hit the best seller list, but it started a long love affair with storytelling.

Today she enjoys an escape to Middle Earth during the rare ‘me’ moments her three young children allow. When not playing toys, picking them back up, or kissing boo-boos, she can be found sprawled on the couch with a book or pencil in hand, and toothpicks propping her eyelids open.