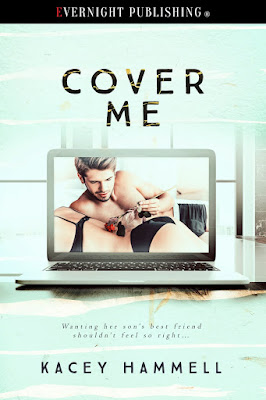 Jay Savage is one of the most sought after models in the business who seems to have it all. He’s the face of romance novel covers from coast to coast, and has expanded his brand to an executive role. Despite the endless possibilities in his life, Jay doesn’t have the one woman he wants most. She is everything he needs, and everything he can’t have. Their age difference isn’t the only obstacle standing in the way of convincing her they were made for one another. Leanne is also his best friend’s mom.
On Nita Lake to celebrate the marriage of her son, Leanne Hogan is faced with the most delicious temptation she’s ever encountered. Their smoldering heat burns down her defenses, and Leanne finds herself giving in to the only man who tempts her banked desires. They shouldn’t work. Can’t work. So why does it feel so right when she’s in his arms?

Evernight Publishing -- 25% off as a new release!
Amazon US | CA | UK
ARe | Bookstrand | Kacey's Website 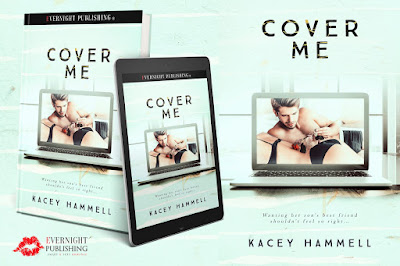 It’s not often that I play music when writing. I sometimes find it too distracting but with Cover Me, it worked well. Reba McEntire is my favorite female artist, as you can probably tell from the playlist. 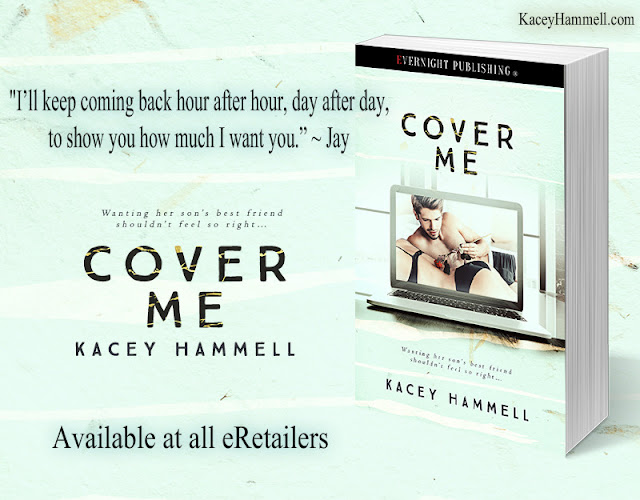 Leanne finished tying the strap of her bikini top, stomach rioting with butterflies, a permanent grin on her face.

Oh, you besotted fool. Chill the fuck out.

In the bathroom mirror, she scrutinized the red bikini and the small stretch marks across her tummy that she still loved because they reminded her of Beau. She cringed at the darker and more prevalent marks across her hips and over her ass. Not the perfect markings a man might want his lover to have.

What the hell. Jay hadn’t minded them last night, and she didn’t want to dwell on them now. He’d promised lighthearted fun and having a good time. Those were two things she needed in her life right now. Thoughts of tomorrow, a week away or six months down the road, weren’t to be discussed or pondered. The here and now was what mattered.

And what woman in their right mind wouldn’t love to have one of the hottest and sexiest models on her arm wherever she went? Leanne laughed, a foreign sound to her, but happiness bloomed inside her.

After admiring herself once more, she turned the doorknob and strode into the living room. Jay’s eyes lit up seeing her. Her breath caught in her throat as his gaze darkened and heat arced its way through the air, surrounding her. Body tingling, she lifted the sundress in her hands and drew it over her head. While she didn’t mind his eyes following her, or lounging on a beach, there was no way she’d stroll through the hotel on full display for everyone to see.

“Damn, had to cover that glorious skin, didn’t you?” Jay wrapped his arms around her waist and kissed her lips.

“The hotel guests won’t want to see me half-naked, thank you very much.” She grinned up at him, her fingers brushing his chin. “As much as I love you looking at me, I’m not that adventurous.”

“Hm.” He hauled her in tight. So tight, the hardness in his shorts poked against her. She smiled, thrilled she had such an effect on him. “Yes. Good idea. But my reasons are selfish. I don’t want other men setting eyes on your hot bod.” He slid his hands down her spine and cupped her ass. “I claim it as all mine.”

She kissed his chin, loving the fun and his sexy words, then stepped back. “Well, a man has never claimed me like that. I kinda love it.” She winked, grabbed her shoulder bag off the hook, and strode to the door.

Jay followed close behind. He slung an arm over her shoulder as they walked to the elevator and kissed her cheek. “I need to stop in my room, change, and grab beach stuff.”

Leanne pressed the down button and nodded. “Why don’t I meet you in the lobby? I’d like to grab water and snacks, unless you need a huge breakfast? Or a few snacks from the kitchen?”

He led her into the elevator when the doors opened and pressed the button for the third floor. “Sounds great. I shouldn’t be long. Just make sure you’re waiting for me, woman.”

Leanne snickered as he backed her into the wall and crowded against her. Her nipples tightened behind her bathing suit, and it almost hurt to breathe. It was as if her body were on fire, stoked and raring to go, and his touch was nearly too much while it soothed her deep.

“I’ll definitely be waiting for you,” she said breathlessly.

Jay groaned and lowered his head to claim her lips. She gripped his biceps as he took her into the decadent abyss of his taste and passion. As though they’d never spent last night making love, her body strained against his; she was more than eager to be with him again. The image of her climbing his body with her legs, settling around his hips, invaded her thoughts.

Leanne clutched his shirt in her fists, desperate to keep him this close as he swirled his tongue inside her mouth, giving all his passion to her. The walls of her pussy clenched. Maybe they should go back to her room for a few hours. Urgency filled her and made her want to sate herself in everything he had to give. Who was she kidding? Even a few hours wouldn’t be enough to satisfy her.

He lifted his head, his breathing deep as he laid his forehead against the wall beside hers. “Jesus, woman, you’re going to fucking kill me. My cock’s so hard, I swear these shorts just grew two sizes too small.”

As if to convince her, his hips shifted, and the length of his dick was very noticeable.

The ding of the elevator rang loud in her ears, and Jay drew away.

He opened both arms, holding the doors apart. His lips red and swollen, he was mussed like a man well loved. Leanne grinned at him.

“Don’t look so pleased with yourself.”

She winked and glanced down at the tent in front of his shorts, then licked her lips. 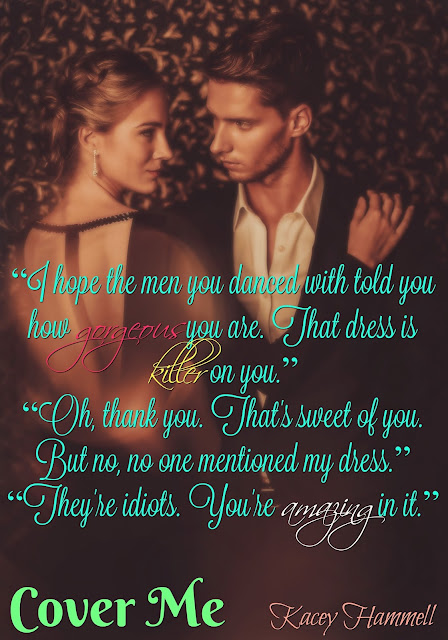 Is it hot in here or is it just me? Oh my goodness, Cover Me is filled with sexiness that will require a cold shower.

Jay has been smitten by his best friend's mother for as long as he can remember. So after years of pinning, Jay gets the opportunity to make a move on Leanne and he's going to put it all on the line. But can Leanne handle the age difference and be able to put her own insecurities aside to grab hold of the love Jay is offering?

I loved how Jay is determined to prove his feelings towards Leanne no matter what anyone may think. The way he tries to build up Leanne's self esteem is honorable. The passion between Jay and Leanne is electrifying.

In the end, I adore the underlining sentiments that love can come from unexpected places and age is just a number.

I recommend this quick, sensual, heart stopping read that will keep you captive until the very end.