Book Tour & Giveaway ~ The Highlander Who Loved Me, Highland Hearts #1,by Tara Kingston

He may be her fiercest ally…or a scoundrel waiting to betray her.Johanna Templeton is on a life-and-death quest. Swept into an intrigue that rivals the tales she pens, she joins forces with a Highland rogue to find the treasure that will save her kidnapped niece—a prize the Scot seeks for reasons that have nothing to do with ransom. Engaging the Highlander in a sizzling battle of the sexes, Johanna shields her heart.

Connor MacMasters, spy for Queen Victoria, is a man on a mission—keep a legendary gemstone from an evil man. Trailing an American novelist who holds the key to the treasure should’ve been simple, but Johanna awakens feelings he’d long thought dead. Torn between duty and desire, he wants her in his bed, but loving her would be a fool’s game. Blasted shame his heart doesn’t agree.

“Looking for a scandal now, are ye, Miss Templeton?” His voice was gruff and teasing. “What’s next, a look at those lovely ankles of yers?”

“Scandal? I hardly think that is a concern in this place. The innkeeper thought nothing of the fact we are not married, yet we’re sharing quarters. And a bed.”

“I won’t leave ye unprotected.” He slanted her a sly grin. “Are ye afraid I pose too much of a temptation to resist? Do I need to be prepared to fend off yer advances?”

She gave a little humph. “I assure you that was not my meaning.”

“Damn shame,” he said, scratching his jaw. “’Tisunsporting of ye, lass, getting a man’s hopes up.”

She folded her arms across her chest, feeble armor, indeed. “I presume this is not your first time at this establishment with a woman who is not your wife.”

Slowly, he came to her. “Ye believe I’m a reckless scoundrel, seducing innocent women along the way?”

“I highly doubt innocents were involved.” She drew in a breath, drinking him in. He’d washed before dinner and donned clean garments, and now, the slight hint of fine Scotch on his breath added to the crisp scent. If only she didn’t find that masculine essence so very appealing.

His hands closed over her shoulders. A wicked gleam lit the jade of his eyes. “They weren’t like ye, Johanna. Ye’re a puzzle a mon longs to solve. Ye pretend ye’re a woman of the world. But I know better.”

“I am not an innocent.” The words sounded defensive as they rolled from her tongue.

“Aye, ye are, sweetling.” His lips brushed her brow, soft and tender. “I dinnae know if ye’ve ever lain with a man. But passion is new to ye. I can see it in yer eyes. I can feel it in yer touch. I can hear it in yer voice.”

For a heartbeat, words failed her. Her mouth went dry. She, who wove words into characters and stories, could not harness a single syllable to refute him. She took a step back. Enough so she could think again.

She met his gaze. “I’ve little use for passion.”

“And that, Miss Templeton, is a blasted shame. And, I suspect, a lie. A woman like ye needs passion.” His large hands settled at her waist and pulled her to him. So close, she immersed herself in his heat, in his strength.

Firelight danced over his face, touching on the strong contours, caressing the wicked tilt of his lips. A man like him…well, a man like him was hopelessly unsuited to a woman like her. She craved order. Stability. A quiet, predictable life.

Connor MacMasters was none of those things. He was six-feet of magnificent chaos. There’d be nothing orderly or stable or predictable about a life with him. But oh, how she craved the man’s caress. His possession.

He cupped her chin with one hand, those beguiling eyes seeming to see her very soul. “I want to kiss ye.”

She heard the question in his words. How very peculiar, this brash, arrogant warrior, seeking her approval before claiming her mouth. And how very marvelous. He’d given her power. Power to deny him. Power to drink him in. Power to savor all he had to give. 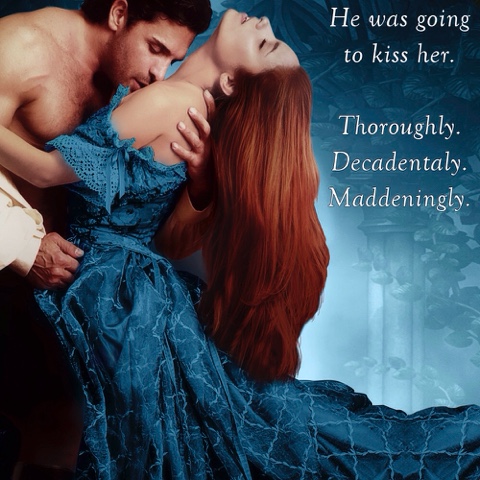 Award-winning author Tara Kingston writes romance laced with intrigue, danger, and adventures of the heart. A Southern Navy brat transplanted to a quaint Pennsylvania town, she lives her own love story with her real-life hero in a cozy Victorian. The mother of two sons, Tara’s a former librarian whose love of books is evident in her popping-at-the-seams bookcases and collection of unusual bookmarks. It goes without saying that Tara’s husband is thankful for the invention of digital books, thereby eliminating the need for yet another bookcase.

When she’s not writing, reading, or burning dinner, Tara enjoys cycling, hiking, and cheering on her favorite football team. Learn more about Tara at www.tarakingston.com.