I didn’t bargain on a roommate, especially not my alluring, naïve little stepsister. She wants to get to know me better, but what she’ll discover could send her screaming in the other direction—or screaming underneath me.

Summer in New York is hot enough without her panties melting, too. I warned her that curiosity killed the cat, but then she reminded me of the rest of that saying—satisfaction brought it back.

Something soft thumped against the door, followed by a low, masculine laugh. I stomped to the door and swung it open. Zoe almost fell in.

“Whoa!” Her male companion caught her around the waist, and she squeaked as the back of her head hit his shoulder. She wriggled around in his arms and put her finger to her lips.

The bushy-haired guy in skinny jeans met my gaze across the threshold. His reddened eyes—what had the little shit been smoking?—widened. “Whoa,” he repeated.

Zoe dissolved into a fit of giggles. I didn’t think she’d seen me, or she might not have been so mirthful. Her linen dress was wrinkled, her shoes missing and her eyes and cheeks bright. I backed up and moved to the darkened kitchen, not sure I could control myself seeing her like this—loose and tipsy and flirty. When she squealed again, I turned back to see her “friend” had hauled her up bridal style in his arms and carried her through the door.

Her hand flailed out. “The Den of Iniquity,” she directed, “is that way.”

He began to maneuver around the furniture, stumbling a little under her weight, when I reappeared out of the shadows.

“What the fuck do you think you’re doing?” I demanded.

He stopped in his tracks, then Zoe’s legs nearly took out my floor lamp as he whirled around with her in his arms.

“Putting her to bed.” He managed to look me in the eye and didn’t stutter, but that’s all the credit I was about to give him.

“The fuck you are.” I stalked toward them, my arms outstretched in demand.

Zoe’s head wobbled as she noticed me. “Oh shit.”

“Oh shit is right,” I snapped, eyeing her friend. “Give her to me.”

His hands slipped over her hip as he tried to adjust her, and his grip left a red mark on her bare upper arm. Fury and jealousy bubbled up in me, like a bottle of soda shaken too hard.

I’d been told before that the more I felt, the less I showed on the outside. At that moment, I must have appeared like a fucking robot.

I startled, blinking in surprise at her simple words. Whatever had been coiling inside my chest suddenly unwound, and I felt like my head had popped off and was bobbing around like a jack in the box.

Tom looked down at her nervously, his arms shaking a little as he righted her to her feet. “Shit, Zoe, you didn’t say anything about a boyfriend.”

“Roommate,” I clarified, still trying to recover my equilibrium.

She rolled her eyes while making a flicking motion toward me with her fingers. “’S’my brother,” she mumbled.

The relief on Tom’s face vanished, along with his buzz. “Look, man, I’m sorry—” When I met his gaze, it was with the guilty understanding that I knew how he’d been hoping to end the evening, and he knew that I knew.

The blazed hipster looked like he was about to shit his pants at the idea that his date’s big brother was about to kill him.

I reached for Zoe, knowing that if I was holding her then I wouldn’t be able to throw him through my coffee table. I also just needed to touch her, needed her safe in my arms. My hand around her wrist, I tugged her to me. She spun over as though we were on a dance floor, her elbows up and caged by mine as her back pressed against my bare chest.

“Quiet.” I felt the urge to hold up my hand, but both of them were full of her luscious, quivering body. She froze briefly, stiffening in my arms. I stifled a groan, my body reacting in completely predictable but nonetheless inappropriate ways to her nearness.

She wriggled, trying to get out of my hold. My arms tightened, and I pressed my hips forward against the curve of her ass. Her gasp was loud, startling both myself and Tom.

“Nathan,” she stage-whispered, “do you have fireworks in your pocket, or are you just happy to see me?” She fell into titters at her own joke, while Tom’s wide eyes met mine.

“Uh, I’d better get going…” Tom averted his gaze and made a beeline for the door.

Fuck, who knew what kind of gossip he might spread at her office?

I squeezed my eyes shut, loosening my hold on Zoe. When I was fairly sure she wouldn’t flee or fall, I opened them. Tom opened the door to the hallway.

“Thanks for getting her home safely, man,” I said gruffly. He turned back to nod at me before shutting the door behind him.

Zoe and I were suspended in silence after he left, frozen together in an intimate pose like a Rodin sculpture. Her chest moved up and down with her breath, the line of her collarbone shifting and her neck flexing as she swallowed.

The sweetness of her perfume had faded, mixing with her sweat and possibly tequila. I wanted to lick the salt off her skin, then sip and suck every part of her until I was drunk.

She cleared her throat nervously. “Uh…”

“Bedtime for bad little girls,” I announced. Then I bent down and hauled her over my shoulder in a fireman carry. Hopefully she wouldn’t puke on me.

She poked the back of my thighs in protest. “Nathan! Put me down!”

I silenced her with one swift, sharp smack to her ass. And it felt fucking amazing. My palm tingled, my whole body vibrating with need. She gasped, but stilled and sagged in submission.

Adjusting my hold on her, I ran my hands up the backs of her thighs until she gasped again. Then she moaned. Navigating carefully, I carried her to my bedroom and tossed her on the bed.

“You are in big trouble, missy.” 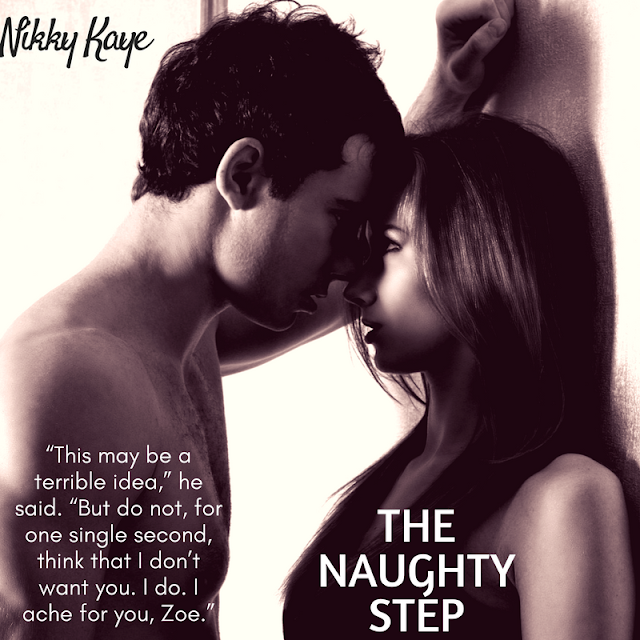