Lily Cookson has a few rules for the New Year, the most important being don’t fall for Jack Bailey. The gorgeous, rugged man returned with a new look and a determination to win her back, catching her off guard. After a forbidden night in his arms, she vows never to let it happen again. But when morning sickness kicks in a few weeks later, Lily realizes staying away from Jack just got a whole lot harder.

Jack Bailey left Shadow Creek behind five years ago when his world imploded around him, knowing it would be best for everyone if he was gone…including Lily. It took him a long time to get his life back on track and grow into the kind of man she needs him to be. Now he’s determined to prove to Lily that he’s back for good and ready to commit, but the secrets she’s holding onto are nothing compared to the bombshell he drops…


Jack ran his hands down his face, trying to look calm and collected, even though his world had just been turned upside down. He didn’t want Lily to see him as anything other than put together, though. Sure, her being pregnant upped his timeline, but it wasn’t bad news. He’d always wanted kids with her. Of course, having her on speaking terms with him would have made things a little simpler.

“I’ve been wracking my brain trying to figure out how this could happen. I have the distinct memory of you putting on a condom.” He had to interrupt, grinning. “You remember that moment?”

Clearly this was not a remark she appreciated, because she let out some kind of squeal and her arms flailed again. “No, no that moment is not what I’m remembering. I’m remembering the one where you told me you hadn’t slept with anyone else in five years.” “That’s true.”

“But you had a condom in your wallet.” He nodded, feeling like he was on the witness-stand. “Did you replace this condom on a regular basis in case you got lucky?”

She was speaking really slowly now, as if she might explode at some point soon if he didn’t give her an answer she liked. He held up a hand.

“Let’s be clear about something. I have no issues finding willing partners. I chose not to sleep with anyone else because I knew I would be coming back to you.”

Her eyes softened for a second then turned to steel. “And what, I was just sitting here waiting for you to get your crap together? How was I supposed to know that the almighty Jack would be back and think he could pick up where he left off? What kind of self-absorbed, conceited thinking is that?” This wasn’t going well at all. “Fine. But it was the truth.”

“Okay, you know what, you’re making me lose my train of thought. Back to the condom. So, that condom was not replaced with a new one every now and then. So basically, what you are telling me is…”

She took a deep breath and he waited for the bomb to drop. He may have been sweating slightly. “You used a five-year-old condom!”

He swallowed hard. “I’m sure it was still fine.” 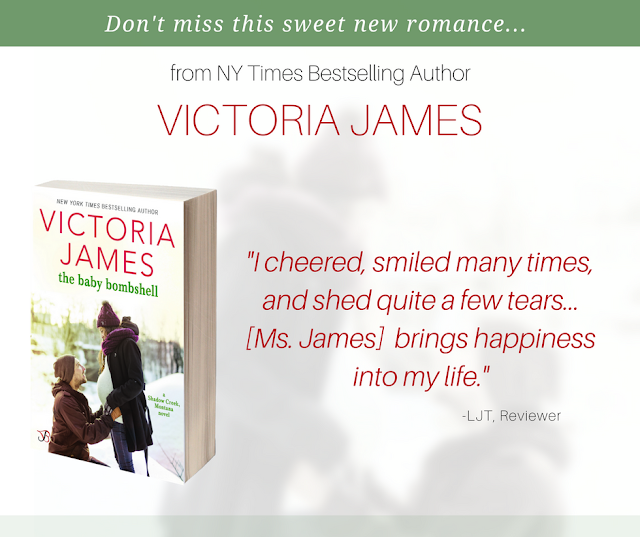 Victoria always knew she wanted to be a writer and in grade five, she penned her first story, bound it (with staples and a cardboard cover) and did all the illustrations herself. Luckily, this book will never see the light of day again.

In high school she fell in love with historical romance and then contemporary romance. After graduating University with an English Literature degree, Victoria pursued a degree in Interior Design and then opened her own business. After her first child, Victoria knew it was time to fulfill her dream of writing romantic fiction.

Victoria is a hopeless romantic who is living her dream, penning happily-ever-after’s for her characters in between managing kids and the family business. Writing on a laptop in the middle of the country in a rambling old Victorian house would be ideal, but she’s quite content living in suburbia with her husband, their two young children, and very bad cat.

Sign up for Victoria’s Newsletter to stay up to date on upcoming releases and exclusive giveaways, follow her blog for daily antics and insight into her daily life, and get to know her on twitter and Facebook. She loves hearing from readers!