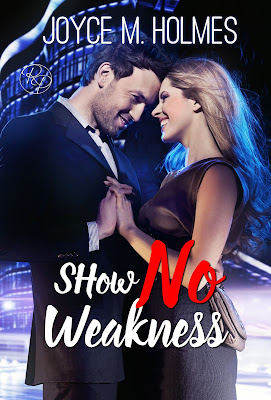 She’s a tenderhearted social worker, looking for her Happy-Ever-After. He’s a distrustful RCMP Corporal who’s sworn off relationships. Factor in a surly teen heading for delinquency, and you have a case of passion and turmoil too explosive to handle.

As a defense mechanism to deal with his guilt and grief over his daughter's death, Cole Dennison has become an expert at compartmentalizing his feelings. He keeps his personal life private, while making it his professional mission to rescue children in peril.

Joely Sinclair is fiercely protective and openly compassionate. When she meets Cole Dennison, she falls hard. He's everything she admires in a man, and because she wears her heart on her sleeve, she can't understand how or why Cole keeps all his emotions to himself.

As much as Coleresents his interest in Joely, with her inquisitive and caring nature, he can't deny her appeal. Against his better judgment, he becomes involved in both her and her son's lives. Taylor is in desperate need of a positive male role model, and Cole can't turn his back on the boy. But when Joely starts talking love, Cole's inability to commit puts an end to their relationship—until a dangerous situation throws them back together.

When given a second chance at love, will Cole risk letting Joely into his battered heart?

“By the time I turned sixteen, I was pregnant. I became a child bride at seventeen, married to an adult-sized infant with chest hair, with a real live baby doll to take care of, as well. That marriage was the biggest mistake I’ve ever made. Before I hit twenty-one, it was over.” She heard the bitterness in her voice and stopped talking.

“That had to be rough, but isn’t it time to stop beating yourself up about it? At least you had enough sense to get out.”

The compassion, the offer of understanding in his voice almost overwhelmed Joely. She wondered if he’d be as sympathetic if he knew she had left her precious little boy with her alcoholic husband while she worked. And it took four years and a serious injury before she clued in to the fact her toddler didn’t get all his bruises from being overactive and clumsy.

No, Cole had it wrong; she didn’t have a whole lot of sense when she was younger.

He pushed his coffee cup aside and leaned forward in his chair to stare sharply at her. She realized he must be very good at his investigative work. Those dark penetrating eyes would intimidate anyone into telling the truth when they flashed as fiercely as they were right now.

“You’re upset. I didn’t mean to do that,” he apologized. “I wanted to make you feel better.”

“Oh no, hey, I’m not upset with you. I actually appreciate your effort. I can’t remember the last time I had a conversation with a man who cared how I felt about myself. Men are usually much more concerned about how I feel about them.”

“You already told me you didn’t like me.” He smiled brilliantly, his eyes crinkling. “Whaddaya say to giving me a chance to change your mind?”

For just a moment, Joely saw beneath the laughing, self-confident grin to the flicker of loneliness in his eyes. He was new to the area, she remembered. He probably didn’t know many people, and here she was monopolizing the conversation. She ignored his question and posed one of her own.

“Why did you choose law enforcement for your career?”

His gaze unexpectedly turned cold. His features revealed no emotion, nothing to indicate why he suddenly shut down. The pause grew a little too long, giving Joely the impression he preferred not to answer.

“I take a lot of satisfaction out of my job, especially working with the kids,” he eventually replied, his voice back to that aggravatingly polite, neutral tone. “But it wasn’t a matter of choice so much as of doing what was expected.”

“Your parents said you had to become a cop?” Joely wanted to keep her mouth shut and let him do the talking, but stunned disbelief made her blurt it out before she could stop herself.

Cole smiled tightly. “My grandfather was a cop, same with my father. As far as they were concerned, there was no other suitable job for a Dennison, and they presumed I’d follow their lead. My mom didn’t get a say; she died when I was five.”

Joely let out an involuntary gasp of sympathy. “Oh, I’m sorry. How sad for you to grow up without a mother.” Not having a father had left a gaping hole in her childhood and even though her mom would’ve never won mother-of-the-year, she’d always given freely of her hugs and kisses. She was important to Joely, and Joely couldn’t imagine growing up without her.

Cole lifted a shoulder casually. “I survived. You don’t miss what you never really had.”

“Yes, you do,” she replied fiercely. “You miss it and you want it terribly. At least I did. I wanted a father more than I wanted anything else. It was the defining reality of my childhood. How can you say you didn’t miss your mother?”

Something hard and acrid flashed in his eyes, and he didn’t acknowledge her words. He pushed out of his chair abruptly. “We should get back to the detachment. Your son’s waited long enough.”

Joyce Holmes lives with her husband and very small dog in the beautiful Okanagan region of British Columbia. Photography and blogging about her travels are two of her passions, along with visiting her kids and grandkids. When she's not dreaming up stories in her head or planning her next great adventure, she’s off enjoying the great outdoors.

Open only to those who can legally enter, receive and use an Amazon.com Gift Code. No purchase necessary, but you must be 18 or older to enter. The winner will be chosen by rafflecopter, and announced on the widget. Winner well be notified by emailed and have 48 hours to respond or a new winner will be chosen. The number of entries received determines the odds of winning. Giveaway was organized by Roane Publishing's marketing department.