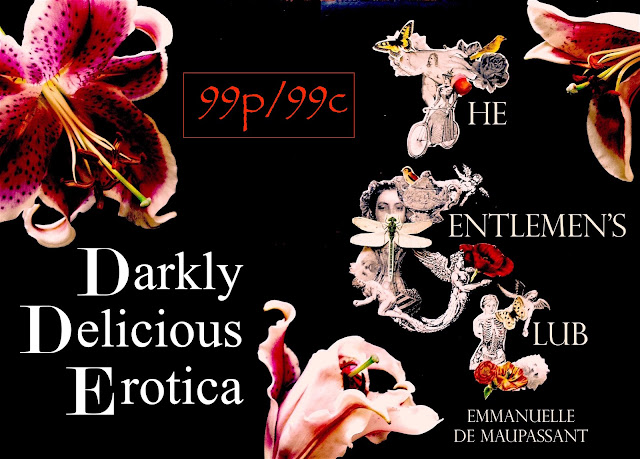 
He can smell the musk of her skin and see the pulse at her throat. Her décolletage is barely covered by the flimsy chiffon, breasts rising with each breath. He touches the end of the crop to her chest, brushing the silk covering her delicate nipple.

He pulls the ribbon, so that the fabric falls away, revealing bare flesh in earnest: her belly, dark bush and legs.

The blood rises within him and his tongue grows dry in his mouth. His feelings are all confusion, thanks in part to the stirring of lust in his loins.

His hands clench against the stem of the crop, itching to reach out and seize the abundant camber of her breasts, to thrust his mouth at them, to devour them, to wrench his teeth at those ripe nipples, to bite them until she cries for his mercy.

He would graze his mouth down her belly and bury his face in her bush. He imagines its plump wetness and the taste of her juices. His desire to consume her near chokes him.


Her eyes have grown dark with hunger. ‘There is a wild intoxication in being watched, knowing that every man is waiting for me, their impulse holding them captive.’

Her voice, so close to her ear, is almost a hiss.

‘At those moments, I control them, through their eagerness to take possession of my flesh. I satisfy their desires and my own, relishing that which others would consider barbarous.’


‘Lord McCaulay, I must be convinced that you can honour your part, allowing me to invite others into our bed.’

At this, she returns to the mirrored door and opens it wide, beckoning two to join them: the huge African and the young Zeus. Both naked, one ebony dark and the other golden, they exhibit strength and beauty such as no man can deny.

Knowing McCaulay is watching, she flicks her ostrich feather over her new lovers’ bodies, her eyes and touch roving to their tight buttocks, their biceps, and their toned abdominal muscles.

Emmanuelle de Maupassant lives with her husband (maker of fruit cake) and her little scruffy terrier (connoisseur of bacon treats and squeaky toys). She enjoys marzipan and sushi, and wild, windswept walks on Scottish beaches. Gin and tonic, always.

http://lovekissedpromotions.com/index.php/blogger-sign-ups/
Posted by Unknown at 03:00